We've heard it all before 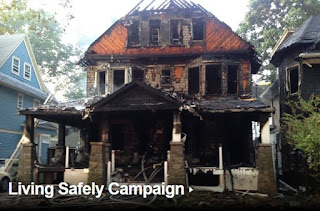 New York City is stepping up its efforts to alert residents to the dangers of illegal housing.

The Department of Buildings, the Fire Department, and the Department of Housing Preservation and Development announced on Thursday that they would be running a “Living Safely” campaign throughout the city to raise awareness of and warn New Yorkers about illegally-converted apartments.

The three agencies aim to distribute 10,000 flyers containing tips on recognizing and avoiding illegal apartments, as well as their dangers and consequences. The flyers will be available at elected officials’ offices, community boards, and various transportation hubs, including the 74th Street-Roosevelt Avenue subway station in Jackson Heights.
Posted by Queens Crapper at 6:11 AM

The newly formed " Queens Immigration Affairs Task Force" should be involved with distributing this information to their "clients".

What a crock of shit, the DOB has gotten thousands of complaints they do nothing about. Even when the DOB gains access to these apartments and issues violations these illegal apartments stay active for years. This has been the NYC's dirty little secret for years, not enough housing. The overdevelopment of NYC is nothing new. The City will hand out flyers but not go after landlords.

Why even bother? Who really believes that in the middle of a "housing crisis", anyone is going to enforce illegal conversion violations and put more people out on the street?

At first when you see the article, it makes one think, Oh, they are finally clamping down on illegal conversions but that is further from the truth.

At a quick first glance when you see this article, you say “wow, the City is finally going to clamp down on this major problem of dangerous illegal conversions”. BUT then you look closer and deeper and that is furthest from the truth. It is just another in a long line of useless city campaigns, that sound good, but actually does absolutely nothing and makes the city held unaccountable or to not do, you know, actual work. Such a campaign is like the useless “Just say no to drugs” campaign by Nancy Reagan or the “If you see something, say something” bullshit.

The problem lies within the city agencies and one of the most inept and corrupt agencies, Department of Buildings. Ever call them on an issue. You will be on the phone for close to an hour being transferred by incompetent city employees who transfer you to the wrong people, who then transfer you back to the first incompetent person who repeats the cycle to other folks, to then find out you have to call back on a Tuesday between the hours of 4pm to 7pm. That actually happened to me when I wanted to get an answer why yet another shit church was being built on a residential street between two houses when it had multiple violations over the years. And in the end, someone comes out, looks at the violation, then states, “no violation at time of inspection” or some other bullshit.

Another case of government NOT doing their job and passing it on to the people.

What I've said for a couple years now I'll reiterate here. What the city needs is a mechanism to start SAFELY moving these basement (not cellar) apartments toward legal status without forcing landlords to forfeit R-3 designations. I.E. Classify as a "two family house with border apartment" or something, and require things like adhering to the 1968 Light and Air requirements, egress windows, floor drains, 2 hour divisions between floors, no permanent partitions aside from bathroom, etc. Set the maximum rent at 60% AMI and force owners to register with HPD, THEN chase down the bad apples. It's a win/win, too bad the REBNY would never allow it to happen and we all know the pols represent them.
-somethingstructural

just throw the money in the garbage. It's so fake. And no, do not make these apartments legal. deport the illegal aliens/day laborers, then there will be plenty of apartments and jobs for American citizens.

Like this will make me give up my illegal basement tax free income,just take cash and don't answer the door when DOB showeS up,this always works for me
I SPEAKEE NO ENGLISH,YOU GO WAY,STOP PICKING ON OLD WOMEN,RACIST,I CALL MR KIM,YOU HAVE NO JOB.

Handing out flyers is going to have no effect. Stop the BS!! Lets get serious and start enforcing the law...

Vote the Bums out ! Everyone must go and cleaned the house out too !

Did I just see someone say there isn't enough housing and then complain about overdevelopment? That makes no sense. Make up your mind, more housing or not?

The point the commenter was making is that the City can't build its way out of this housing crisis---despite what they would have you believe. No matter how much they build, demand far exceeds supply. Land is a finite resource, and infrastructure isn't being upgraded to keep pace with the new developments. So after we've developed every square inch and we're all living like sardines, there's still not enough housing. So yes, you can have not enough housing and overdevelopment at the same time. We're living in it right now!

That's what makes this talk about enforcing rules against illegal basement apartments a complete farce. There is no way that they're going to start enforcing that and adding to the housing crisis when they're already complaining about a housing shortage.

"Did I just see someone say there isn't enough housing and then complain about overdevelopment? That makes no sense. Make up your mind, more housing or not?"

Maybe this clip should stop any more doubts. We could use more ideas like this in city planning. Hell maybe from a deputy mayor. Rita...(at 0:30)

Hahaha- this is a joke!!! Is the city saying people should stop illegal housing and then what? Follow the city's example and ignore it? Hand out fliers?

18 Complaints on 86-45 231 Street in Queens Village. 18! From the outside you can see that this "2 family home" has 5 entrances, two outdoor stairwells leading to the second floor, and an illegal school/mosque in the basement. But the city does nothing!!! Just take the complaints and had out a lot of XX dispensation codes. XX is the code for Administrative Closure.

Why would an administrator close the complaint before an inspector even tries to ring the doorbell? Maybe someone works for the city? Is there money changing hands? Or are we more worried about being PC than following the law and doing what is right for the community?

THANK YOU HOUSING BUBBLE........all those who wish for outrageous home prices need to have those illegal apartments to pay the inflated mortgage....

lots of conversions in sunnyside on the south side off greenpoint....you know when utilities are included something may not be right.