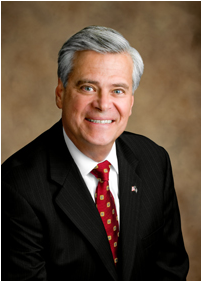 The 67-year-old Skelos and his 33-year-old son, Adam, were convicted in Federal District Court on all charges, which included three counts of extortion under color of official right, two counts of soliciting bribes in connection with a federal program and one count of conspiracy to commit honest services fraud.

The father-son duo are facing up to 130 years in prison, according to reports, and will be sentenced early next year.

The elder Skelos allegedly used his position to get money into the pockets of his son. Among the allegations made by the U.S. Attorney’s Office for the Southern District of New York and the Federal Bureau of Investigation are that Dean Skelos got a developer dependent on him for tax breaks to give Adam Skelos $20,000, and an environmental technology company seeking to do business with the state to give him $10,000 a month.

"The swift convictions of Sheldon Silver and Dean Skelos beg an important question," U.S. Attorney Preet Bharara said in a statement, "how many prosecutions will it take before Albany gives the people of New York the honest government they deserve?"
Posted by Queens Crapper at 7:59 AM

Grrrrreat! The Dean of corruptionn is cooked. Stick a fork in him and get the mustard.

No more $400 haircuts, facials, and manicures for Dean the pretty boy. They shave your head in prison.

"how many prosecutions will it take before Albany gives the people of New York the honest government they deserve?"

The caption should have read, 'Dean & Son are done,' with many more to follow.

And, now that the giant rolling 'snowball of corruption' has finally picked up speed and momentum, may it continue to reward and recognize the hard and soul crushing work of all honest, ethical New York crime busters, instead of service that is merely an exception to the rule of systemic greed, graft and grinding political corruption (and the endless kickbacks, cover-ups and payoffs that have entrenched the system so completely).

Hence, a new era in all government, public servant openness and transparency must always be expected, insisted and demanded by our taxpaying citizens, in order to properly restore, reclaim and revive a broken system of 'taxation without representation' (that continues to practice 'selective' and 'occasional' representation), as well as a dereliction of public duty (that devalues all honesty itself!), while still amazingly betraying any pretense of the collective oaths of public office, whom these voracious thieves have robbed from its hardworking people, with a vengeful impunity!

The 'Open Bar' is finally closed, all drunk (with power) Albany betrayers of trust, ethics and integrity---and, where the MOTHER of all hangovers has not even begun!

I would have been Vice President under Hillary,Cuomo,,is next.

I have to congratulate the Feds and our judicial system for this knockout performance in reeling in these wannabe big fish. Now its time to go after COUMO...

Yep, the father and son due facing 130 years.
Well done.

At what point will the voters realize that something should be done at the voting booth?

I mean we cannot rely on the feds all the time to make things right.

I am having a very difficult time being optimistic that Cuomo will be indited, prosecuted and jailed.

I understand he has the charming, warm and fuzzy personality of Hillary and both seem to be coated in Teflon...

2 less turds in the Albany cesspool

So what happens to the idiot son now? Up for adoption?

does that mean we can take his name off the soccer field complex on Peninsula Blvd by Mercy Medical Center?

Re the soccer field-to save money, keep the name, but engrave "convicted felon" in the space under the name. Blend it in to make it look nice.