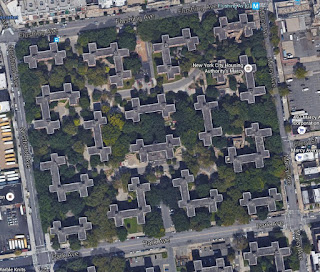 A slew of public housing tenants ripped off the taxpayers by under-reporting income to inflate their benefits, the city Department of Investigation charged Friday.

Over the last few weeks, 17 tenants have been charged with stealing public funds, including 12 who deliberately hid income-producing husbands and other relatives to collect more federal rent subsidies.

Two tenants even managed to pull this off despite the fact that their husbands worked for the city, according to DOI Commissioner Mark Peters.

One tenant got the federal subsidy, known as Section 8, without reporting that her husband was the super in the privately owned Section 8 building where they lived.
Posted by Queens Crapper at 6:51 AM

Fucking despicable that this low level graft is still going on. It's pathetic that they were able to gleefully get away with it for a while.

When will see someone at the housing authority fired for allowing this to happen, not retrained, not disciplined, not reassigned but fired and their pension taken away?

Why are we picking on these poor people?

Sounds racist to me...

I knew this for years. I knew it since the minute I saw chinese moving into the projects. Not only do they move in but they take up whole buildings. I knew that something fishy was going on in project housing these days.

yes the city says there isn't enough fraud to warrant more staff to check for this crap. :(

A fish stinks from the head down. These petty con artists steal thousands while those who allow it to happen steal millions.

This is NOT low level graft. It goes all the way to the top. NYCHA residents and Section 8 voucher holders are able to do the fraud with the help of supervisors within these agencies- NYC HRA Human Resources Administration.
No one does fraud on their own. the employees know how to scam the system.

Tell me it's blacks and Spanish people, Dominicans doing this. They are the experts at scams.

Years ago (like 30 years ago at least), the Department of Housing and Urban Renewal (HUD), which is the major funding agency for the NYCHA projects and Section 8 (Existing Housing Program) made an extremely strong recommendation to the NYCHA to have all adult family members in these programs to sign a Social Security Release form at the time of their income recertification. This WOULD REPORT ALL EARNINGS ON RECORD WITH THE SOCIAL SECURITY ADMINISTRATION for the individual to the NYCHA. The NYCHA flew into a rage, stating that they would be "opening up their entire population pool to a third party, i.e., HUD (ha, the very agency that primarily funds them)!" thereby compromising "confidentiality". What a joke. Of course, there is little that anyone can do for "off the books work" and "underreporting of earned income" by employers (often the tenants themselves or family member who "owns" the business) read: most immigrants, not to the mention the notorious underreporting by other groups, who shall remain unnamed, but primarily reside in the Williamsburg projects and Section 8 developments.

Now all they need is someone with the guts to prosecute these frauds!

Its time for the authorities to do their jobs. This isnt something new. Its been going on for decades. I agree with Camel Bladder in that the officials that work for NYCHA that turn a blind eye and allow this to happen should be fired or prosecuted. The city needs to double the staff at the DOI so that they can continue to crack down on this type of fraud...

Don't forget about AirBnB listing in housing projects too

Governments create this problem by creating the incentives for lying. There's a penalty for being honest. This sort of petty corruption undermines civilization.

In a private rental transaction, you choose the apartment and the landlord and you negotiate the rent and terms. If you fail to pay, you get evicted. If the landlord doesn't maintain, you move out or sue at your option. If none of those, everybody comes out ahead.

Pretty soon they will catch up to the politicians who are ripping off the system. Silly me you said 17 tenants, that a very small percentage of tenants in the housing projects. The thieving politicians have them beat hands down.

How much longer do we have to pay these reparations? No wonder Trump leads.

This has been going on everywhere for years, and because of that tenants have become EXPERTS at abusing the system. The abuse is so common and widespread the city is going to need and army of people to sort this out. These people should face jail and be made to pay back all that rent and services
The mayor also needs to be recalled and placed in a hospital because it appears something is very mentally wrong with him.-- this is grounds for re-call

One tenant got the federal subsidy, known as Section 8, without reporting that her husband was the super in the privately owned Section 8 building where they lived.

Which tells me the landlord is in on the fraud, too.

Chinese moving into the projects? Remember, NYCHA have free electric--you can expect businesses being operated in these apartments--sewing machines, carpentry, upholstery, you name it--not to mention free gas--so commercial stoves for COOKING!!

Drive on FRANCIS LEWIS BLVD north from Northern Blvd to C.I.Pkwy.It was named to honor our signor of THE DECLARATION OF INDEPENDENCE,fron ENGLAND in 1778. His family sacrificed all for our Nation.The new immigrants are bastardizing his name by only placing "FRANCIS" on their store signs.?They have been informed ,but do not care.