How many city workers does it take to fix a hole? 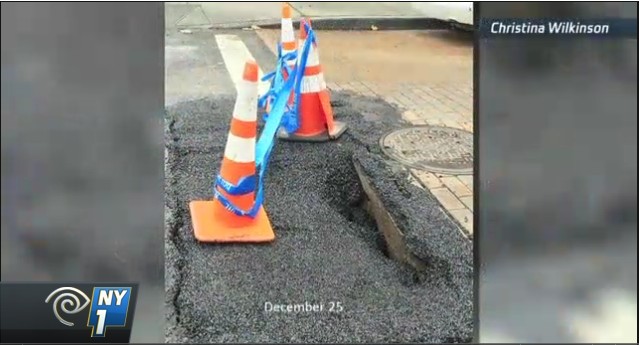 Department of Transportation workers were back at it again Monday pouring asphalt into a sink hole on Stockholm Street for the third time in five days and the fourth time this month. Many residents on this landmarked brick paved street have had enough.

"I don't know who's supervising it but this is not the way to fix a deep hole and it keeps sinking in you know," said one resident.

The city filled the hole on Christmas Eve and again on Christmas Day. But by Monday the asphalt was cracked and sinking.

"The garbage truck came in again and then it, there's a hole again!" said a neighbor.

The problem started in June when a small crack appeared next to the manhole cover where the street meets Woodward Avenue. There is also cracking on the road near the hole.

"It's a dangerous hazard here," said another resident.

Last year a bicyclist was seriously injured when he hit a pothole just steps away from the sinkhole and fell on a fence which went through his neck. After several complaints to 311 many here say it's time for a permanent fix.
Posted by Queens Crapper at 8:39 AM

What a sweetheart deal.

The curse of St Aloysius.

Another quarter assed job by the DOT

IT SHOULD ONLY TAKE 2-3 WORKERS BUT I'M SURE THEY HAVE A TEAM OF 10 GUYS RAKING UP OVERTIME THANKS TO THE UNIONS...

How do small municipalities in the suburbs do a 1000000% better job than NYC? Considering the trillions of tax dollars that the city has taken in over the last century , it's streets should be paved in gold!!

We need Alloidal title in America

This idea that taxation is the price of civilization is liberal poisoned pablum !

Broken water pipe underneath? This will keep happening until an entire truck falls through.

My neighbor and I were discussing these sham "repairs" on city streets just last night. I personally called in several repairs. I actually watched one "repair" at 144-27 Jewel Avenue in Flushing being done. I could see right away that it was shoddy work, even before they were finished. Sure enough, their "repair" didn't even last a day. From what I understand, this exact same site has been called in multiple times, but there is still a serious asphalt wave and sunken part that someone not familiar with could break an axle on. My neighbor actually had damage to his car from this sinkhole. For my email complaints on this sinkhole and other dangerous potholes, sinkholes and waves, I received replies like "We have investigated this situation and it is taken care of" --total BS. If someone had actually investigated these sites, they would really have seen dangerous street conditions. I truly believe that some lazy piece of excrement is just punching a boilerplate paste key to virtually all these street repair emails.

The other night, I had to drive up the Van Wyck in hard driving rain. I could easily have had an accident, because HALF THE STREET LIGHTS WERE OUT and HALF THE LANE MARKINGS WERE WORN AWAY. No one could see what lane they were in. It was truly a white knuckle drive.

My question is: "What the HELL are they doing with all the tax money collected?" The streets are in the most miserable repair I've ever seen. The street lights are burned out in about half the area they are supposed to cover. Is DeDumDum handing out the tax money collected to his beloved illegal immigrants and ghetto thugs, income redistribution while Rome burns with dangerously broken, unlit streets?

'This idea that taxation is the price of civilization is liberal poisoned pablum !'

I agree. Didn't this country get founded because we DIDN'T want to pay taxes?

Only a liberal would think paying taxes is patriotic and then use every trick in the book to get out of them.

Prime example: The Clinton's. They took deductions on clothing donations for Bill's underwear while in Arkansas. Very undignified. Worse even, some poor person bought and wore that underwear. I hope they cleaned them first!

Guess my taxes go up again for all these free lunchez !!1

This is all we will ever get with government employees doing everything for us on such a large scale. ALL of this kind of public work should be farmed out to private companies on contract when they fuck up we can cancel their contract. We these feather merchant parasites fuck up I think we promote them and make them managers. If we don't change the system things will continue to get get worse. Can you say Detroit?

There are still free lunches, only the tax payers don't get to eat them.

When it collapses, the entire car falls in, the driver gets a scratch and is severely traumatized.
Then the city settles for a million dollars, not counting what the city pays the lawyers.

Mechanics need to earn money to pay for their taxes!

Where does the money for painting the lines go?
For the BIKE LANES of course...

"The power to tax, once conceded, has no limits; it contains until it destroys."
Robert A. Heinlein, The Moon is a Harsh Mistress

Sounds similar to 2 humps on Francis Lewis Blvd. DOT said they didn't see anything wrong. I told them "they muust be blind then". I tried for over 2 yrs to get these fixed. It took them to fix the 2 sunken manholes 2 1/2 yrs at that intersectin of Francis Lewis & Crocheron/35 Ave.

i did the math and it takes 37 people to fix a pothole...

A platoon if they're all assholes and our tax money is paying for their coffee breaks.