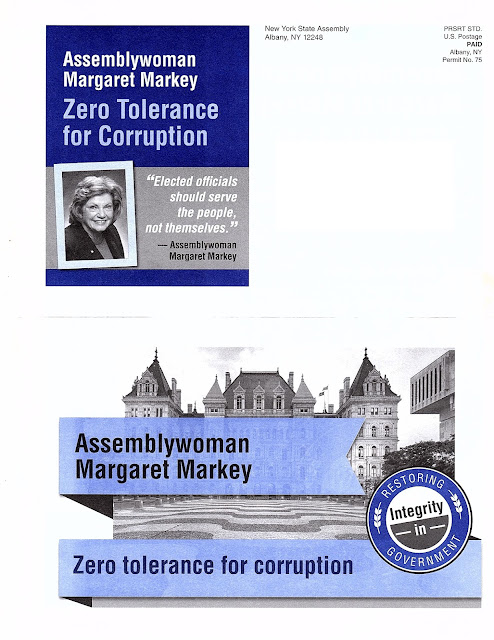 I'm not really sure why the Times Ledger felt that an article about Marge Markey's re-election fundraiser was newsworthy without at least mentioning that she has a Democratic opponent in the primary. But she would like her constituents to know that she is not corrupt, as evidenced by this mailer, the fact that she voted with Sheldon Silver something like 99% of the time and has been a Crowley clubhouse girl since 1999. 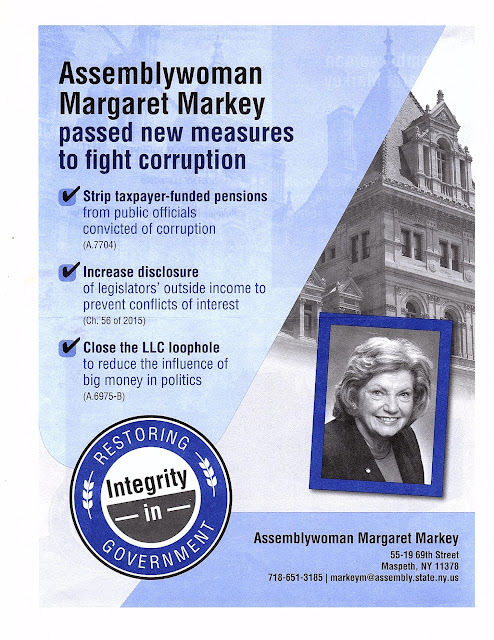 (She also doesn't represent Glendale, but don't tell the Times Ledger that.)
Posted by Queens Crapper at 6:07 AM

I love it when political insiders claim to be political outsiders... Reminds me of the Simpsons episode when Sideshow Bob runs for Mayor and criticizes the current Mayor for having released a dangerous criminal like Sidshow Bob from prison.

She's just as corrupt as her colleagues .

How corrupt can she be?

She is never around and does nothing...

It's so-o-o obvious she's trying to save her political ass.

Marge is one of those dull, ordinary workaday common bricks in the palace of corruption. She does not have the talent to be one of those big corruption cornerstones like Skelos and company. Nevertheless, each tiny brick of corruption builds crooked government.
Yawn....what a tired old hack Marge is.

Anyone associated with the Crowleys must go.

Hence, all politically empowered idiots never listen to their constituencies, choosing instead to betray all public trust with impunity, as they continue to practice 'selective' and 'occasional' representation, while never living by the rules, only making their own!

Alas, in the insular orbit of these politically designed, exclusionary membership, cookie cutter, cradle-to-grave, government hack clubs, the message, credo and edict are always the same: It's "Don't Blow My Scam---And, I Won't Blow Yours!"

She must be nervous
Hey,how about voting for term limits? That way a pol doesn't have time to get entrenched and become corrupt....

I believe the magicians call this Misdirection.

We The People of New York City, ALREADY voted to adopt term limits for the mayoralty (twice!!), until former Council Speaker Christine Quinn abrogated our lawful rights to enforce both public referendums, by brazenly pounding out an illegal, backroom deal with former Mayor Michael Bloomberg, when she so ordered her demigod to serve an illegal third term, in exchange for Quinn's own rosy future assured, as the next mayor of New York City---and we all know how that dishonest rig ended! (In 2009, Quinn also appointed herself and the entire city council, a hefty raise that was adamantly opposed at a public hearing on the matter.)

Hence, it's long overdue for the new, crooked Council Speaker Melissa Mark-Viverito (and personal de Blasio pal), to hold yet another public referendum for city council term limits, but short of civil unrest, I wouldn't hold my breath---this recalcitrant administration is even more intensely incompetent that the one it replaced!

But, whether term limits are on next year's ballot or not, I can't help but notice how the similarities are eerily (and diabolically) alike, regarding the fall of disgraced, former Speaker Quinn, and the current White House administration that pounded out a similar backroom deal between Barack Obama and Hillary (aka, 'Corporate Shillary Hillionaire') Clinton, and the completely corrupt DNA (and their dishonest, dissembling, insidious Chair, Debbie Wasserman-Schultz).

In that rigged deal, Obama and his handlers made a devil deal with Hillary, that followed her withdrawing from the presidency, in exchange for the cushy, vacuous, secretary of state position (over which she couldn't even successfully attempt to feign any pretense of competence), until the dynastic, Clinton commander-in-chief scepter is passed on to 'Her Crookedness!'

And, just like the 'delicious irony' outcome of Empress Quinn, Queen Hillary ('The Shilldabeast'), and the delusional, untrustworthy DNC, are about to receive a crash course in how karma always has a peculiar way of arriving unannounced, when public trust and integrity are betrayed with impunity!

Alas, the handwriting is on the wall---and, it's written in Day-Glo!

Mario's son ran on this same platform in his gubernatorial campaign. But he just couldn't see the malfeasance once he got there. Mostly because, and as was presented in the defenses of Silver and Skelos, it was an open secret how all the tainted sausage was made and how the machine works.

And as an enabler of those indicted scumbags, she probably got a taste of it.

If you look up the term 'Political Hack' in the dictionary you'll find a picture of Markey.

She had the campaign kick-off dinner (probably a fundraiser) at Dazies in Sunnyside.

I guess she couldn't find a restaurant willing to host this farce in her own district.

Couldn't agree more. Right on the money.
Thanks!

So, she has been in office 15+ years but decided that these are good ideas now?

What ever you can say about her, she is in a different league than the Vallones, who, as rumor has it, had a big hand in taking a strong community and making it a developer's play thing ripping the heart out of it - look at the Steinway Mansion that she wanted to save.

Next to that Astoria crowd, this woman is a model politician.

Bottom line? Marge will draw a fat pension when she retires from her political job.
When I went to grade school , I was told that in Anerica anyone can become president.
Fuck that! Too much responsibility and headaches. Become a Congressman or an upstate politico. Sit still. Follow orders from the party. Warm a seat until retirement age. It's a much more easy, cushy job than being commander in chief.

From a borough hall lackey to Claire Shulman on up to Albany.
Go down on your political boses and stay loyal to your Nazicrat party and you will be promoted.
Please use a mouthwash after performing felatio or cunilingus.

And leave NO DNA on the dress...

*I was told that in Anerica anyone can become president.
Fuck that! Too much responsibility and headaches. Become a Congressman or an upstate politico.*

That's right! POTUS is a joke position.
Some of the members in congress and senate been there for decades.
Same is true for local politicos.
The gig is great, money is good, power is good.
Lovely corrupt system that guarantees outcome for a few connected.

I'm willing to give Barnwell a chance. Out with the old, in with the new!

if one wants to know how your nys/nyc Congperson voted on HR4038,referring to the Syrian/Iraq refugees being also vetted by the F.B.I /H.S.D.before entrance to the U.S ,check www.congress.gov to get asummary of the PASSED BILLS roll-call vote.You will know which pols.do not care about your families safety from Middle east terrorists. F.B.I.Dir. J. Comey says that there is no method to absolutely trust who the refugees are.