Melinda Katz: Where are you?

An open letter to Borough President Melinda Katz from The Friends of Steinway Mansion (Written September 2015):

The Steinways played a pivotal role in making New York as the center of arts and culture. In this spirit, the Friends of Steinway Mansion has proposed that the area around the piano factory and the mansion as a special business zone for the arts and artisans – a place for them to learn their craft and showcase their work.

As this article from a March 2014 edition of the New York Times examines, the arts community in our city is under increasing stress from harsh economics. Space is falling victim to rents. Collaboration is lost to commute times.

Entire segments of the art world in dance and theater are drifting away. Creative people still come here, but their goals of a life in the arts gets more elusive with each passing year.
What will happen to New York's role as a world leader in arts and as a tourist destination? What will happen if our city loses our arts community?

The Friends of Steinway Mansion calls for the Borough President to consider the Steinway Arts District and make the mansion a centerpiece of this dream. Those 11 ‘warehouses’? How about artist workspace?

Any other borough would jump at this opportunity. Why not Queens? Are you not a patron of the arts?

We would be happy to discuss this Madam Borough President. We are just a phone call away.

I would like to make you aware of a disturbing decision made by the Landmarks Preservation Commission with regard to the status of Old St. James Episcopal Parish Hall, located at 86-02 Broadway in Elmhurst, one of the oldest and most historic buildings in Queens. Attached is the response from Mary Beth Betts, director of research at the LPC, to a request for evaluation submitted by State Senator Tony Avella at Newtown Historical Society’s request. In this letter, Ms. Betts cites the building’s alteration and “re-creation” in 2004 as the cause of rejection. This rationale is patently false and dishonest, as I will prove below.

Some background on the building: It was originally built in 1735 and was attended by some of the earliest families living in Newtown, such as the Moores and Seaburys. It was remodeled in 1883 and completely restored by the Landmarks Conservancy in 2004. A detailed history can be found on this website: tinyurl.com/oldstjames. A passage from this narrative:

In 1963, the Post Office wanted to buy Old St. James to tear it down for a new post office. The church rejected their offer. In a letter written that year, they cited the historic importance of the church. Today, the building is used as a community center, hosting meetings of groups such as the Boy Scouts, AA, veterans groups, and church services by smaller congregations.

In 2004, the church got a necessary restoration. The project, which cost $430,000, included a $150,000 loan from the Landmarks Conservancy. The building got a new rood, the cedar siding was restored, as were the wooden windows and the eaves and brackets. The 1883 decorative bracketing on the gables, which had been removed, was restored, as well, bringing the building back to its 1880s appearance. The project architect was Kaitsen Woo, and his general contractor was 53 Restorations, Inc. The Conservancy awarded the project with its Lucy G. Moses Preservation Award. Thanks to the stubbornness of St. James, and the desire by the Elmhurst community to preserve an important part of Queens history, this building is with us to enjoy today.

Once again – restored – not re-created, and almost entirely with taxpayer funds a mere 11 years ago. The minimum age for a building to qualify for designation is 30 years. Old St. James Parish Hall’s 1883 remodeling exceeds that by 153 years.

This rejection is a slap in the face to the NYS Historic Preservation Office, which not only has placed this property on the National Register of Historic Places, but reviewed, approved, and funded its $430K restoration, finding it met the Secretary of the Interior’s standards. Even if there is little 18th century fabric at the exterior, the 19th century fabric is nothing to sneeze at – especially since the asbestos shingle was removed and the trim restored (additionally, existing shingle siding, while not holding paint very well, IS the original 19th century shingle, and not a modern replacement).

And furthermore, even if this WAS a re-creation as claimed by Ms. Betts, there have been several other structures that were completely demolished and rebuilt yet still were designated NYC landmarks by the LPC – including the Theodore Roosevelt Birthplace and Fraunces Tavern in Manhattan. Neither of these contains its original fabric and neither was rebuilt in the exact same style.

With the emphasis lately on expanding tourism in the borough and in light of the 50th anniversary of the Landmarks Law, it would be a shame to lose this engaging piece of Queens history that is appreciated by natives, immigrants and tourists alike. The rejection of one of the most historic sites in our borough by the LPC is an arbitrary and capricious action that cannot be taken lightly and we ask for your intervention to help save it.

There doesn't seem to have been a response from Borough Hall to either of these letters. But there's a lot of this being spread around: 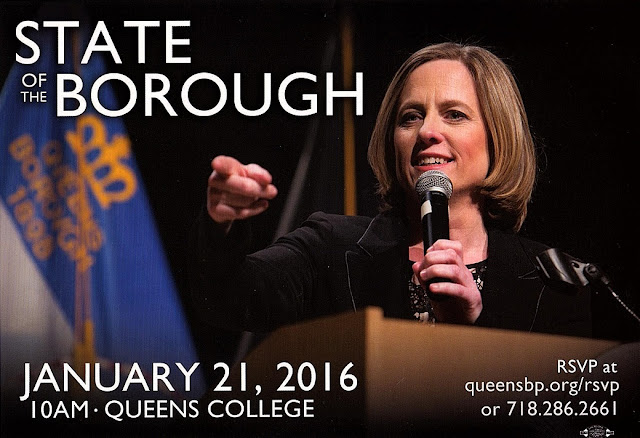 State of the Borough: "The NYS Pavilion got a paint job, so the preservation of Queens is complete. Vibrant! Diverse!"
Posted by Queens Crapper at 12:29 AM

I still don't understand why we need a Boro president when we have a City Council. What a waste of tax dollars!

There are plans to unload the Steinway Mansion on the Friends and then watch them slowly twist in the wind as funding to do anything useful is withheld. Air rights will undoubtedly be transferred to the warehouses and they will become hotels, er shelters, that will rain the detritus of poverty on the building.

The new owners, who will assume control after paying off the Friends debt, will gut the interior and then run it as a 'club' that will be raided a few times by the police and left derelict and dark with poorly secured windows and doors. The next door neighbors will have a field day ripping out the the pipes, tagging and setting fires that will take care of the roof.

The empty shell will become a 'danger to the community' and will be pulled down, ready to be assembled at an upstate facility that echoes a Bethpage Restoration setting.

Cleared, the 'warehouses' can be extended making the lots 'useful.' The rest of the area, called 'Steinway Estates,' will be filled with the cheapest construction possible. Flooded regularly, sited next to a power plant and sewage plant, it is the perfect place to unload shelters far from civilization. Steinway will of course move to China making a windfall for the company and Paulson on selling the property to investment groups involving Pistilli and his ilk.

A black eye to the Steinway brand, to Paulson, to Sweeny, to the New York Times, and above all to the Astoria community whose only accomplishment was to protect the reputations of the Vallones, Costa, Gianaris and that community board.

The community will retire angry powerless and sullen - as it always seems to be - left holding the bag as being responsible for this outrage and regarded forever as backward ignorant Mediterranean hillbillies.

Say goodbye to the name 'Astoria' - who will want to be associated with that word (which will become synonymous with the word 'philistine') in the eyes of an outraged world where the significance of the brand 'Steinway' is understood and appreciated?

All of this will be carefully documented and to be someday published by Crappy.

You saved me much typing!

You are quite the soothsayer!

Can you help us out with some winning lotto numbers???

We need a borough president so the democratic machine can place loyal soldiers in what amounts to a no-show job and collect a salary. How embarrassing...

The church was surrounded by a cemetery. Have fun developing that property.

Where is our next mayor, Jimmy Van Bramer on all this culture being destroyed in Queens.

No doubt Manhattan is already fed up with one administration that is, for all intents and purposes, right out of Queens - will they settle for another?

Sure, Jimmy thinks everything can be run out of the library (with the history stuff curated by Vallone's chiropractor, I kid you not)

I wonder if she Will she be addressing the problem of illegal subletting. Landlords continue to turn a blind eye to tenants illegally subletting their space to NUMEROUS illegal immigrants who pay on a weekly basis to sleep in an apartment designed for no more than 3-4 people (including children). This practice is so prevalent and I don't understand why the city is not doing more to crack down on this activity. It's a serious fire hazard as well as a security issue because you don't know the nature of these transients. WAKE UP KATZ !!!

She's working on her State of the Boro speech.

As if the shopworn alley Katz gives a damn. She fakes concern for historic preservation but has, is, and will always be the developers' courtesan of choice. They bought her office as they did with Manes, Shulman, etc.

Extra! Extra! Read All About It!

See for yourself as masonry work begins on the Caliendo-designed/Loria-Lucchese-owned Steinway warehouse begins . . . exclusive photos from last night (Tuesday, 12/08) here. For your convenient orientation: aerial view of where this exact devastation to our historical legacy is occurring here.

HEY ROBERTO !! Check out this report:

What exactly will be occupying those warehouses anyway? If it is for manufacturing it would serve a purpose and create much needed jobs.

But I have an inkling that they will all be art galleries with lodging. Predator developers are infatuated with all these hack artists with limited scope ripping off graffiti and creating gigantic renditions of refuse (like wads of gum and dropped lollipops)

And that picture of the completed result, I can't think of anything more analogous than cancer killing white blood cells, or even the blob devouring all in it's wake.

She's got a Steinway at home, why should she care what happens to the rest of them?

also "Main Street "SIGNS ON f.l.b.? would you buy services from a vendor ,who does not know what his location is ?

You can always depend on Melinda Katz keeping her head safely up her own ass, smelling the roses, unless she is summoned by one of her developer pals. For that, she will jump out of bed at 3:00 AM to "service" them. "Please leave the money on my nightstand".