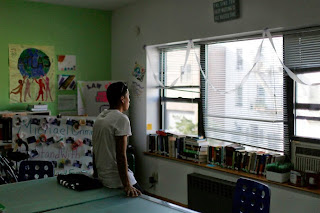 Cristian is one of the tens of thousands of unaccompanied minors who have illegally crossed the southwest border in recent months, in a wave that has overwhelmed immigration officials and prompted the Obama administration to declare a humanitarian crisis and open three emergency shelters, on military bases in California, Oklahoma and Texas.

But while the government’s response has been largely focused on the southwest, the surge of child migrants is quickly becoming a crisis around the country. The fallout is being felt most acutely in places with large immigrant populations, like New York, where newly arrived children and their relatives are flooding community groups. They seek help fighting deportation orders, getting health care, dealing with the psychological traumas of migration, managing the challenges of family reunification and enrolling in school.

Federal officials will not reveal how many children they are holding, how many are being released or where they are being sent. But in the New York region, immigrant advocacy organizations say they have seen a stunning rise in the number of unaccompanied minors seeking help in the past several months.

“All of a sudden it went from a trickle to more like a river,” said Anne Pilsbury, director of Central American Legal Assistance in Brooklyn.
Posted by Queens Crapper at 12:44 AM

So much for the paranoia theory. New York is going to be swamped and sunk.
The number flooding across without government intervention (adults) must be a good nine times more then those apprehended and counted right now. God help anybody with a small kid trying to learn and be safe in the NYC school system !!

This is garbage! Now they are claiming that they are refugees! Their countries have been crap for many years, but now all of a sudden oduma wants to give these illegals amnesty, and now these illegals are crossing the border in floods. Pack them up and ship them back to their motherlands! Tell them to come here the legal way! They are not refugees, they are criminals claiming to be refugees. We don't need the world's problems, we already have enough problems of our own! We already have thousands of citizens (who are living on the streets those people include children ) that the government isn't helping. Why does America have to fix every country's problems? America can't even fix their own problems!

I have a solution, deport them.

Try not to come in contact with illegals, who may be TB or other disease carriers.

All part of Barry Obama's plan to overwhelm the system Cloward-Piven style.

Here's a solution - use the immigrants/illegals to invade the countries with the most illegals in the US - annex them - and send their natives back.

Kill all the outsourcing to China and India and build plants in Mexico, Columbia, the DR and wherever the hell else they come from! Let them work and let them eat - just not in Queens!!!!

Hey DeSleazio - Park Slope and Brooklyn Heights are ripe for development - they're both pretty low density as compared to all of Queens!!!!

Yes it is very traumatic deciding whether to jump over the border fence or dig under it.

Hundreds being flown, released and handed over to relatives in NYC who are also Illegals !!

From what im hearing via ham radio the kids have been coached what to say and to deliberately run to the arms of the border patrol agents in packs, falling down screaming for help, water, food to overload them.
The adults then make a run for it on there own also in packs of 100s. They have hand held Baofeng UHF radios (cheap encrypted radios) with lookout people (drug smuggler gangs) hidden on hills directing them and picking them up with trucks
This whole things been no doubt professionally engineered & orchestrated.
Most these people are headed to New York and other blue "come and get it" sanctuary states.
An EXPLOSION of heroine, cocaine, prostitution and crime is likley to come with it

Where does the Mexican government stand on this issue? Obama needs to give El Presidente a call. We should close the border and stop admitting them into the US. When will the Federal Government enforce our laws? The border should be closed for five years to sort out the entire illegal mess. What about the people that follow the immigration laws and wait in line to come here? Our government owes us an explanation.

Mexico just "decriminalized illegal crossing to dump all their shit here like Castro did in the 60s.
No joke:
http://cnsnews.com/mrctv-blog/dan-joseph/mexican-embassy-mexicans-illegally-crossing-us-border-are-not-committing-crime

The president is doing NOTHING and is actually inviting some of the criminals & La Raza gang activists to the white house for dinners and sleepovers
See: http://www.breitbart.com/Big-Government/2014/06/17/Tone-Deaf-WH-Ceremony-Honoring-Amnesty-Recipients-Could-Worsen-Border-Crisis

My question is why is Obama getting away with shitting on both the Constitution & Congress, lawbreaking and mass negligence with the lives of 300 million people ?
All grounds for impeachment !!!

"Our government owes us an explanation"

Yeah IM IMPERIL KING THUG AND YOUR NOT !!
FU, Congress and the Constitution. I don't need you (or laws) to get things done. ! Your all to old, out with you all, die already.
Explanation: This transfusion of new blood speeds up the process.

1. Closing the border to all new immigration for five years until all illegals are deported is an excellent idea.
2. Tariffs against China to restore manufacturing in the interior.
3. Eliminated H1B visas until unemployment drops. Wages in technical fields will rebound and help restore the middle class.

Im not a MD but it may be time to do some studying, acquire & stash some effective antibiotics and anti-parasitic meds in the fridge. (If you get sick good luck finding a doctor or useful emergency care with this coming)
Carried by this tsunami of illegals headed this way are the invisible “travelers” our politicians won’t mention: all the shit the U.S. taxpayers spent $$$$ hundreds of billions to control or virtually eradicated 40+ years ago: tuberculosis (TB), Chagas disease, dengue fever, hepatitis, malaria, measles, plus dozens more bugs and typical under the skin crawlers. We and many young US doctors don't know about.

A public health crisis, the likes of which never seen in our lifetimes, is looming. Hardest hit by exposures to these diseases will be Americans with no immuniety, especially elderly, school children, immunosuppressed cancer-patients, patients with chronic lung disease or heart problems. Drug-resistant tuberculosis is the most serious risk, but even diseases like measles can cause severe complications and death in older people. TB is highly contagious.

All these people are being dumped on Arizona and Texas streets with an "appearance ticket" and vouchers for commercial flights and transportation's to wherever they claim to have relatives to take care and house them.

The public danger is very real in NYC and its criminal the public being kept in the dark.
This is in all over the newspapers, TV and internet outlets in the UK and Europe but not ONE PEEP here !!

I prefer immigrants over the obnoxiously loud up-talking, pasty-faced, $3,000 one-bedroom paying, dull midwestern transplants who are about to KILL the borough of Queens as it is now known, and turn it into another urban midwest, you know, like Manhattan and Williamsburg.