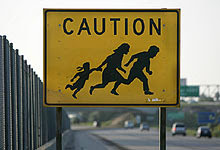 From the LA Times:

The number of children and teenagers traveling alone from Guatemala, Honduras and El Salvador is expected to reach up to 90,000 across the Southwest border by the end of the year, along with a surge of families with children seeking safe passage into the U.S.

Detentions along this stretch of the river have gone from up to 50 immigrants a week to as many as 300. On Tuesday night, constables captured 100, on Monday nearly 200. Authorities are comparing the onslaught of homeless detainees to the displacements brought by Hurricane Katrina.

Children detained by immigration authorities are supposed to be held a maximum of 72 hours, then moved to temporary shelters, where they spend about a month on average before being placed with relatives or sponsors while their immigration cases are pending.

But senior Obama administration officials who briefed reporters this week acknowledged that they haven't been able to meet the 72-hour requirement: There is simply not enough staff to process all the new arrivals.

Once they are processed, the Border Patrol has been flying many families to other states and releasing them en masse at bus stations with notices to appear in immigration courts at their destinations.

Let me guess...they're bound for JFK?
Posted by Queens Crapper at 12:19 AM

INS division 6 always lets them go. Then they act like they have bigger fish to fry...

We do not need any more immigrants!

It sucks but why are so many leaving their homes?

So many immigrants have no respect for this country and have no interest in assimilating - just check out any store in Corona or Flooshing.

The Asians and Latinos don't think they have to learn English - it's too hard! Give me a break! The world is filled with people that speak multiple languages - it can be done!

We need more deportation and our borders secured ( what we were promised in 1986)!

I agree with anonymous 2....we don't need any more immigrants here- legal or illegal. The legal ones, the government should reconsider letting them live anywhere in this country... Parts of California and all of NYC is already overburdened with immigrants. There is no room to keep building and our services are already overstretched! The illegal ones should be deported with their families- after all I wouldn't want to break their families up!

no one,even the xenophobes,should worry about immigration because obama has deported more illegals than W bush did.If anything this will help the private prisons and their investors by incarcerating them if they get caught speeding or jump a turnstyle.

Also, I love how your throw in the term "CIA inspired assassins". That's so edgy! Was the point of your comment to criticize Mexico, or perhaps just another chance for you to flash your reflexive anti-American left wing politics?

no one,even the xenophobes,should worry about immigration because obama has deported more illegals than W bush did.

So, as always with folks like you, it's "George W. Bush's fault!!", and Obama is simply his ideological heir, or something like that.

I think you left out the Koch Brothers, Walmart, Fox News, Rush Limbaugh, Sarah Palin, and the white male patriarchy in your connect-the-dots teenage conspiracy babble.

sorry to offend you,but its just a comment.There is a lot of ink written about the continuing byzantine immigration problem on the internet.
I wasn't trying to be political or put forward some edgy left wing agenda.And I never defended that selfie obsessed fool Obama.

If you want more depth,I suggest the writings of Noam Chomsky or Reason magazine and any major news website from the ny times to the murdoch owned wall st journal.Even the national review and counterpunch.

and one more thing,thanks to the NSA and the supreme court assistance to citizens united and mccutchen,there are no conspiracies anymore.All we have is cynicism and controlled chaos

the simple cut of benefits for non-US citizens will reduce dramatically the number of illegals. Most of them come here because they will get something for free. It will not solve the problem in whole, but will be a step toward.

Just spoke to several people on the ham radio.
Obama is now using the military police to arrest border agents, police, EMS, anbody who dare talk to the press or take photos of the insanity.
The cartels and smugglers are tearing the fence down and the president is still giving orders to STAND DOWN and let them all through.

See www.drudgereport.com before its shut down

They are now letting the gangs, criminals in (no checks anybody can cross)and arresting the border agents.
I think the president is in with the Taliban to destroy the country.

The article has been censored to leave out some zeros on the numbers and other facts.
The people flooding in are mostly Central Americans

People don't understand the severity of the problem.
The horde people and kids are flooding into the country 1000's per hour, many are sick with bad diseases most young Americans have no resistance to. Its going to bankrupt the country and over run the police department when they get here.
Your talking 500,000 "mountain people" that can not read, write or speak English in Queens by September.
The FCC has placed a gag order on the media----this is an invasion and most will be coming to New York demanding free stuff, food, and housing.

This is unbelievable. Flooding the borders and we see fit do nothing. to stop this from happening. Instead of sending troops to other countries, we need to protect our borders.

These illegal immigrants are a huge burden on we the citizens of the U.S. We will have to deal with the diseases that they bring; the crime; the births of numerous offspring that they cannot afford to care for; housing issues; overcrowding of our schools; and the cost of feeding the population; and housing them in prisons when they commit their crimes.

We cannot continue to allow illegal entry into our Country under any circumstances. Have we lost total control of our borders?

The American people are sick of having to deal with the after effects of the stampede of illegals.

The president is punishing the whole country for not getting the immigration reform amnesty he wanted.
ICE just released 6 big planeloads of these invaders on Bostons streets. Under these new executive orders ICE didn't even warn or even have to speak to the Governor, police or anybody.
Many of these people are carrying TB and other nasty diseases
NOT A JOKE !
See:


Apparently no more southern border
Obama is letting them blow the fences up and telling our own agencys to stand down, feed, re-cloth and take them to airports for re-distribution in big city's.
The only requirement for release is a promise to appear in court for an immigration hearing. These people cant even read or sign the tickets. They throw them away and laugh

do not forget the COURT ORDERED FORCED BUSING of CAUCASION Pupils for INTEGRATION,from the 1970's to 1990's. billions of taxpayer waste,and upheaval of U.S. towns.

and the minority SAT'S are still below standards.