#1 complaint for MTA is presence of homeless 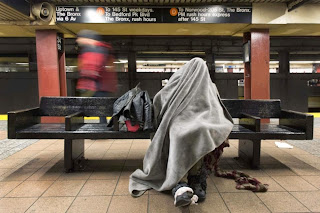 The MTA referred to the police more rider complaints about the homeless than any other quality-of-life issue, records show.

The Metropolitan Transportation Authority forwarded 122 gripes about the homeless to the police for possible action and intervention this year. That’s 42% of the 288 rider complaints the MTA passed along to cops. The second-highest category was graffiti and other vandalism, and third was subway acrobats.

Most of the complaints about the homeless were from riders who felt threatened or endangered, or believed that homeless people posed a danger to themselves, MTA spokesman Kevin Ortiz said.

The NYPD has a homeless outreach unit in the subway. The city Department of Homeless Services, the police and the MTA next month are launching an expanded effort to entice the subway’s homeless to get mental health and other assistance, and to move out of stations and trains.
Posted by Queens Crapper at 12:00 AM

There has to be homeless presence in the subway so undercover cops can blend in with them.

No shit! The subway has always had problems with homeless people!

In my station, 67th Ave M and R, we had one homeless gentleman living in the station 24/7 for at least 4 years. I finally contacted the city through 311, since station managers proudly do not display phone numbers any more and soon after, he was gone. It's such a difference entering the platform and NOT seeing this person with all his belongings. He was harmless but took up an entire bench and it was just disturbing that he was there every day, always. I also let them know about a crumbling step. Both of these things got attended to soon after I contacted them, so maybe 311 works. Who knows. Worth a shot.

But the bigger ongoing problem is with the Bum train, oh, I mean the E. If people take a train into the city from JFK, that's their train! Can you imagine the impression that gives? Plus, just very disgusting and intimidating for all of us!

The "M" station at Fresh Pond has had a trio of shady characters hanging out on the stairs and mezzanine most day and night. I dont know if these are homeless, but they are younger males that look up to no good, and look like they've been thru the system before.

They smoke and drink on MTA property, but nobody does anything. You would think that the 104th, being two blocks way, would do something about it.

Commuters should be entitled to a harassment-free ride without loud music or speeches from homeless looking to make a buck. Get your sh*t together, seek help and get a damn job like the rest of us.

I can't stand all the loud "musicians" and "performers" in the subways. It's annoying and distracting. I don't know why or how it's allowed.

It's not. Only a few have permission to hustle on the platforms and stations. But cops don't ride the trains as they used to.

So in order to get anything done about this really obvious problem we're all suppose to complain to the MTA every time we see homeless people on the train? Do they honestly think we all have nothing better to fucking do every day but to complain about a fucking problem that is RIGHT FUCKING THERE?

'Station Managers' - what a joke. And the cops? See nothing and say nothing. Cops are never around in the subway, and their supervisors? I can't recall the last time I saw a white shirt on the subway. Years, maybe decades - if ever - and I've lived in NYC my whole life.

Notice a trend? Think about it. This city was destroyed by Bloomberg and his PIG pals and now we are reaping the rewards. It's called a trickle down effect. Maybe you've heard of it...

Time to leave the city for greener pastures. The rich can keep it for their toilet.

Gotta love the dirt bags that play the bongos on the uptown 4/5 in Manhattan during the afternoon rush, cursing and threatening people who don't give them money! Only in New York kids, only in New York..