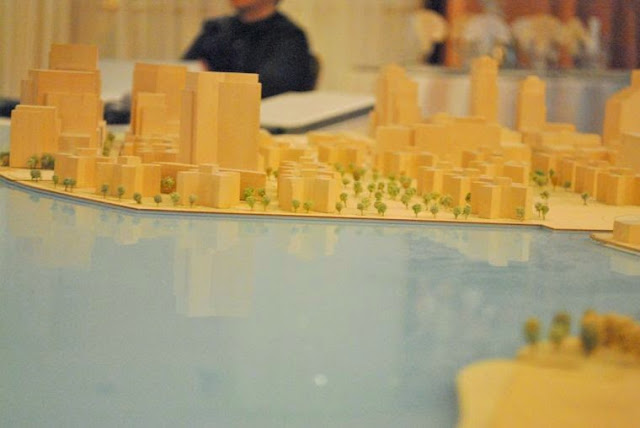 Last week, Community Board 1 unanimously voted against the building proposal for development of Astoria Cove unless the developers agree to several conditions it laid out.

It was deemed a victory by many of the union workers and affordable housing advocates in attendance.

As it turns out, there was one factor that was left unaddressed, a possible investigation of a portion of the site for environmental law violations.

“In 2012, there were two ongoing investigations on the land, one conducted by the [Environmental Protection Agency] and the other by [the Department of Environmental Conservation],” Stephen Benavides, director of research for Laborers’ Local 78, said.

According to Benavides, the agencies were investigating Tri-State Cleaning Solutions, now known as ALR, the former owner of old buildings at the site.

The DEC investigation involves alleged illegal dumping of asbestos-containing material as well as use of the site at 801 26 Ave. in Astoria as an illegal transfer point for friable asbestos.

“The developers conducted a limited visual screening of the land,” Benavides said. “This does not provide an accurate idea of what is going on because it’s not only asbestos, there are PCBs and underground petroleum tanks that were closed in the 1990s. In my experience, these things leak.”

During a public hearing CB 1 hosted before voting on the proposal, a woman named Jeanie stood up and voiced her concern over the possible environmental and health risks. She was cut off due to time restraints but was adamant that Alma Realty and the rest of the Astoria Cove developers were making a mistake.

Alma Realty and CB 1 could not be reached for comment.

The DEC could not confirm the existence or status of the investigation.

Oh my, now that the cat's out of the bag, what will happen?
Posted by Queens Crapper at 12:44 AM

Everyone on City Planning, as well as Vallone, Costa, Mike G, Aravella and Vinnie D knows that from Newtown Creek all the way to Flushing Bay the waterfront is one big hazardous waste dump.

THEY HAVE NO SAINTS BUT MONEY.

That is why the rich moved away 100 years ago and they put in the projects.

Add that to global warming that will flood this and no infrastructure you are looking at a festering sore for years to come.

Environmental and safety concerns (illegal basement apartments) will have to take a back seat, we need to house the glut of illegal cheap labor that NYC has invited in. Overcrowding, inadequate health care,hunger,and homelessness can all be traced back to one issue.

Right next to Shore Towers.

Not to get excited boys, this is Astoria.

Some elected official will calmly state that plans (part of the original project) are already in place to clean this up - and should be completed in 10 or so days.

And everyone will say, ah, okay, thanks for taking care of this for us.

Then Rose Marie will complain about airport noise which will drive this off the front page.

Everything real nice and tidy and the community will resume its role as backdrops holding signs for this or that pols photo op or rioting over a football game on Steinway Street while the taco truck crowd says 'that's so neat - they don't do stuff like that back in Davenport.'

Go home people, there is nothing here.