The group hopes to get the support of Queens Borough President Melinda Katz, but that appears to be unlikely.

In its press release, the group said they met with two of Katz’s staffers, Barry Grodenchik and Nayelli Valencia, to state their case for bringing the statue back to Queens. Iritano said that Grodenchik told them they would consider that, along with other options for the site, and have more meetings scheduled with them in the future.

When asked about the issue and the meeting, a spokesperson for Katz said the Borough President’s position on what to do with the vacant area remains unchanged from what she said earlier this year: she prefers that the site be converted to a plaza that honors women of Queens and outside the City for the work they have done. This was an idea first mentioned by her predecessor, Helen Marshall.

Iritano said Grodenchik gave them the impression that they would consider bringing back the statue and they had no knowledge of Katz’s position prior to their meeting with Katz’s staffers in April of this year.

Katz’s spokesperson said they should have not gotten that impression and the Borough President’s position on the matter remains unchanged, despite the meeting.

Hmmm...Perhaps we can alter the statue to honor women of Queens. Here's my proposal: 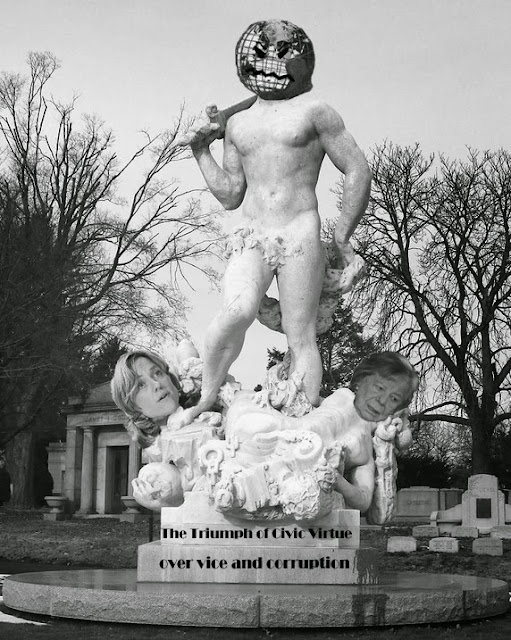 The Greek statues weren't all white like that. Has more character with color. What was all that grime, car exhaust from being right by the highways? They should paint it.

That Neyelli has no foot print before she got that job.

That is right my peeps, its a great mystery on why she has such a powerful position with no real experience.

And Barry, ah, there is someone who represents a classic borough hall functionary that has been a hanger on for a long long time.

So much for cleaning house.

The Triumph of Barry Grodenchik.

Barry is not only a function(less)ary, but a supernumerary.There ya go- have at it!

Anyone who thinks the statue is "sexist" obviously isn't very well educated.

The statue is quite clearly allegorical. Those aren't women he's standing on, but drakaina. Women generally are not depicted with serpent tails.

'If the public wants the statue returned, then Katz should accede to that goal. '

And what exactly makes you think the good people of Queens want the racist and sexist statue to begrime their beautiful borough?

Racist? Well that's a new one! Welcome to the world of ignorance.

Who does the BP work for? How does one go about getting her fired?

I've always thought that a fountain would be a better focal point for that spot, regardless of where the statue goes.

There has always been a fountain there. It was the base of the statue. The BPs let it go to pot.

that woman is an idiot

the queef boro prez continues to show outright ignorance of the meaning of the statue.if not her ignorance of the definition of virtue and civics.Which is why those putrid pols wanted to put it in the graveyard in the first place.

I wonder how Katz hides her scaly tail.

Let's be honest - the out-of-control female pols knew that this statue wasn't sexist, they were just greedy twits who wanted the site for their self-appointed undeserved monument at taxpayer expense. That's why Helen Marshall shot down the plan to make it a garden ruin, and why Katz didn't say anything until the advocates got a local paper to run a story where she'd have to weigh in. What human garbage we have in office.

We should prepare ourselves that Queen Catherine is going in there - a total fiction that Borough Hall aided by Queens Historical Society and the borough historian, a board member, is foisting on us.

Well, despite my best efforts at common sense, logic and wisdom, pitifully confused monarch to seize power and control at Queens Borough Hall (under the guise of freedom and democracy), is Melinda Katz, and her leftover staff, from the light-deprived dungeons of Helen Marshall. Frankly, when did the residents of Queens agree to neo-fascism and monarchy rule from any borough president, let alone the present? It all started with the dishonor and disloyalty that shamefully date back to the grips of Claire Shulman? A borough presidents job (if one can even define the all-over-the-map rules that are quickly imposed and executed--and the public be damned), is to serve as a custodian of trust, and to listen to the free will and voice of every constituent whom they purportedly serve. The position relies chiefly on common sense, due diligence, research, accountability, transparency and full disclosure--yet I and my fellow Queens residents haven't seen any of these traits that speak of character, integrity and principle, for decades. Instead, we've been collectively held hostage, despite our First Amendment rights to free speech, that are now routinely squelched, and no longer a mandate in policy enforcement. Welcome, Queens County residents (and beyond), to the new government branch of neo-fascism! It appears that our new borough president is a subscriber to the newest breed of a willful betrayal of lawful, honest, ethical leadership (that leads by example), and simultaneously condones a direction that betrays trust so forcefully and completely, that freedom of choice, freedom of voice and basic democracy itself, are rescinded from within the corridors of city and state government--with aggression, defiance and impunity. In fact, despite Madam Katz's speech that she delivered at Community Board 9's June 10, 2014 meeting that spoke of her working for the people, and accountability, I nevertheless found contradiction and irony in her dismissive office staff (Nayelli Valencia Torrent, Barry Grodenchik), who ignored my telephone calls, e-mails and letters for nine weeks, and when I finally got a confirmed commitment for an April 8th meeting, the Civic Virtue Task Force members were misled to believe that fairness and public voice would prevail, regarding Civic Virtue's return to Queens Boulevard. Is this the face of new, honest and ethical leadership, or a tired and predictable retread of the same dismissive arrogance, barbarism and savagery that continue to ignore American freedoms and democracy that our ours to enjoy? Queens County is not the Third World--and we freewheeling, independent freedom worshipers have never subscribed to any rule except democracy. I implore you, Madam President to listen carefully to your subjects. We want Civic Virtue back--and prominently displayed atop a working fountain for everyone to enjoy Alas, the intensely incompetent idiots who approved the eviction of a 22-ton statue should be flogged to infinity for even suggesting such a costly and dangerous move, where the statue itself could have been permanently damaged. Now that it is repaired (at taxpayer expense), we want it back--and without further delay. If you can hustle $40 million for a proposal to refurbish the World's Fair, then you can allocate $40,000 to order the very same armature that was designed to cage Civic Virtue to Green-Wood Cemetery, right back to its home base, that was gifted to Queens for the past 71 years, by Mayor Fiorello LaGuardia. In closing, please listen to your subjects Madam President, who've already said a resounding 'YES' to its return, by way of public referendum--and refrain from personal opinions that you share about Civic Virtue. No one appointed anyone to serve as a public art censor. Likewise, you were not asked to substitue any proposal in place of Civic Virtue's homecoming, and we certainly don't need your permission. Enough is enough!

We have a City Council to represent our interests by destruct. Why do we need a Boro Pres. and WHO do they represent?

@Richard Iritano who has been squelching your first amendment rights to free speech, and how?

" Queens Crapper said...
Racist? Well that's a new one! Welcome to the world of ignorance.

Well maybe if we painted each limb a different color to represent the vibrantly diverse borough of Queens it wouldn't have been moved.

Richard, stick around here - this borough is run so poorly there are dozens of issues for you to take up -and try to break up your postings by paragraphs and space.

As to the issue of ignoring constituents there are more and more complains about this behavior by our officials - this was started a few years ago by the electeds in Astoria and Long Island City and is now starting to spread east.

It certainly is a disturbing trend (like setting up a scholarship named after a family member and expecting the city to pay for funding it) and is a direct result of living in a one party place with no viable choices for office.

These people now have absolutely no incentive to even go through the show of listening to you.

They own all the local news sources (except blogs) and have lavished attention on transient immigrants / hipsters that can always be counted out to dress the stage to show they have local support.

They don't want Civic Virtue and don't need it. They are politicians!