Diversity Plaza is a little too vibrant 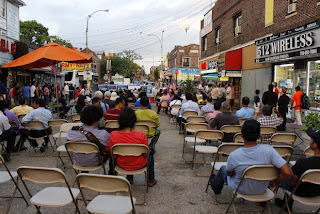 Two police officers have begun patrolling Diversity Plaza in response to complaints about vagrants, loud music and other safety issues, according to the precinct's commander — good news for those who say the plaza has become a scourge in the neighborhood.

One officer is stationed on Broadway and 37th Road and another on 74th Street and Roosevelt Avenue, with a focus on "proactively addressing any of the conditions [at Diversity Plaza] as well as making contacts with members of the community and partnerships w/the community," according to Deputy Inspector Michael Cody of the 115th Precinct.

He made the announcement at Community Board 3's June meeting, which was held outside at the plaza.

"Right here in Diversity Plaza, there's been a lot of complaints of vagrants, loud music, running the gamut," he said. "I know it's a very vibrant area and it's used for a lot of great purposes for the community."

Most of the complaints have been for drinking in public and sleeping on the ground among other things, he added.

Diversity Plaza? What crap is this? All this "diversity" BS is ruining our city and country! Diversity means " no whites allowed". Think about it.

I can't believe its actually called diversity plaza.Will they build a museum of tolerance there?

Compare this third world public space to a public space in Manhattan or in Virginia were Queens Czar Crowley is raising his family.

What a filthy shithole! But still a lot cleaner than Downtown Flooshing!

Granted that plaza is pretty disgusting, I was there a few weeks ago, drunk bums laying on the street, dirty, BUT what do you expect, look where it is.

The one comment is right, South Queens, especially Jamaica, is the Wild Wild West, due to our wonderful diversity and no one does anything about quality of life issues, especially with garbage, loud music and fireworks which start a few week before the 4th and go on all summer at all times of the day.

Face it this whole "diversity" thing in NYC has made a mess of many neighborhoods whether you want to admit it or not. Part of the issue are the "Diversity slobs: from low-class third world countries (and I said slobs, not all) and a lack of enforcement and the do whatever attitude in NYC and especially Queens.

Diversity plaza is probably filled with drunk Mexicans everywhere.....I see Them on the seven train all the time..... I almost got sat on a few times by them because they couldn't walk while drunk.
Diversity plaza looks like a street in Mexico!

If that article wasn't in DNA Info, I'd swear that it was something written at The Onion!

WAR IS PEACE
FREEDOM IS SLAVERY
IGNORANCE IS STRENGTH
DIVERSITY IS OUR STRENGTH!!!

Diversity is linked to letting construction sites fester, loud bars drive out long term residents, and turning the resources of city government over to developers - the point is to hollow out communities to make them easier to develop and fill them with residents that will keep their mouth shut.

They should change Broadway's name to Vibrancy Avenue and Roosevelt Ave to Multicultural Highway.

I like the dumplings at Diversity Plaza in the cart w/ the lady around the corner.

This kind of diversity and vibrancy would not be tolerated in City Hall Park.

Garbage and loud music are the signature of most public spaces in Queens in nice warm weather.

You can't impose the Anglo values on them. That's diversity.

And just what does New York's finest do as they grace the corners of this feculent slum. Not a whole lot, evidently. They ought to begin by handing out multilingual, multicultural, diverse FINES to anyone caught littering, pissing, spitting, blowing their nose without a tissue, and any other unacceptable, third-world behaviors. Just think of the revenue this city could bring in from that area alone. Rather than ticketing/booting/towing cars, it would make so much more sense and be way more cost effective to ticket, arrest, and/or cart this filthy vermin back off to the third world from which they came and to which they belong. BRING BACK THE EARLE. The area was so much cleaner then.

Is there any real diversity among the people hanging out at Diversity Plaza?