Who will lead the Queens GOP? 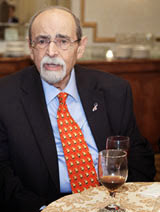 Phil Ragusa, chairman of the Queens Republican Party, died Tuesday surrounded by his family after a short battle with leukemia, the party said.

Ragusa, who lived in Whitestone, had headed the Queens GOP party since 2007, according to spokesman Robert Hornak.
Bayside Pilates

“Chairman Ragusa will be remembered for his integrity and commitment to the democratic process and was viewed by many as not just a friend but a mentor,” Hornak said.

Who was leading it before?

With Ragusa kicking the bucket and Tabone drunk on the sidewalk, maybe the Queens GOP can grow some balls. You reading this Ognibene?

Was this man going to be a witness against Smith. Can't help but wonder about the timing here...never put it past an inner city democrat to spill blood. It's in their nature.

I don't think anybody, even from the "inner city" can inflict leukemia on someone.

They are done anyway.

It doesn't matter who leads it. The GOP is irrelevant in Queens.

We need Bob Turner back now more than ever.

I am the egg-man.
They are the egg-men.
Phil was the walrus.
Goo goo goo job.

Phil Ragusa was funny, honest and a self-made businessman. No matter what you thought of him - he really loved politics, never got paid for that love, and unlike some of the people whom he trusted, he never broke the law or took money under the table. (Confirmed by everyone who ever knew him including those under indictment whose conversations were recorded secretly on tape by the Feds)
He actually did a great job as chairman considering what he inherited when he took the job in 2007. Prior to that, the party hit rock bottom with no election victories to speak of. So, first thing he did was to surround himself with people who knew something about winning in politics. He never made deals with Democrats. He decided to recruit young people and candidates actually got elected on the local level. Sure, there were losses, but there were victories too, and he did his very best. Unfortunately, he was too trusting-- that was his only fault- his second in command and council rep got greedy and they took down the party as a result. Ragusa was only interested in passing the baton to the younger generation; he was selfless because he just wanted young people to carry on the torch.

The GOP only exists in the counties of New York where the Democrats overwhelm the Republicans to control the patronage jobs that are mandated by law or tradition to go to members of the minority party.

Even losers get some spoils and the GOP chairperson controls them. One need not be concerned with winning elections.

Proof (other than idle gossip from extreme right-wing websites)?