Melinda needs to get a grip on FMCP 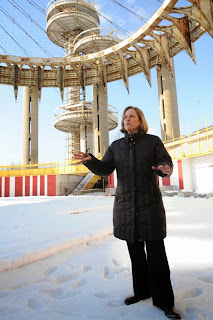 Letter to the Editor [Times Ledger]: Flushing Meadows Corona Park has three distinctions: It is the most used of this city’s municipal parks; it has the largest lake; and it is the most neglected, underfunded and abused, dumped upon with all sorts of structures that do not belong in an urban park, courtesy of the Neanderthal politicians who mismanage this city, view FMCP not as an urban park but as real estate to be turned over to real estate and business interests — their true constituents — and the public be damned.

They never understood this park is the lifeblood of an urban society and used primarily by the underprivileged who do not have homes in the Hamptons and probably not even a rear yard.

In the 50 years since the close of the 1964-65 World’s Fair, if one were to walk around Meadow Lake and wanted to sit down on a bench and admire the lake, it could not be done because there are no and never were benches.

In the May 23-29 edition of TimesLedger Newspapers, the current Borough President Melinda Katz is quoted referring to FMCP as “the crown jewel of the park system in Queens.”

Katz has been on and off in politics for years, never lifted a finger to help FMCP and always supported alien transgressions in the park. If it be a jewel, it be zircon. In view of her abysmal record, I nominate her for the chutzpah award of the year.

Flushing
Posted by Queens Crapper at 12:01 AM

One of the things I liked about this year's celebrations is the $100 K was brought in by Marg Markey and then a secret group of recipients were brought in to get it - most used the most spurious excuse trying their institution with Flushing Meadows.

Meanwhile other groups that contributed were never contacted and had to work to get their change.

Once again, a small group of connected gets all the public money sucking all the oxygen out of the room for everyone else.

BTW, the project to do a 3D scan of the NYS Pavilion, mentioned on QC in 2009, is finally going to begin.

There is a big engineering dilemma with restoring the NTSP. I spoke with an engineer who worked on the theater rehab some years ago.
Problem is the tent columns are on wooden piles. To dig around and stabilize them and the concrete pyle "caps" for stabilization THEN restoration would mean destroying the map and mezzanine, perimeter wall that was just painted included.
the observation decks piles are steel and are in good condition to last another 50+ years.

Now who pays this big $$ bill for only to be told how to operate it by the city and the unions. That park is a union shop of special interest and idiots !! Hell those people cant even fix lights, mosaics and keep the bums out from defecating on the benches. The Westinghouse time capsule nook is still literally used a a toilet. The cement benches stained with feces and urine !!

Who the hell in their right mind would trust these park people to maintain and secure your $80 million dollar investment ? Donald Trump even said at at NBC SNL season wrap party I also attended when I asked him for some thoughts:
" Quote: What, spend $80 million dollars only to be a tenant and have the city tell me how to run my building, who to employ and what to do --SCREW THAT"