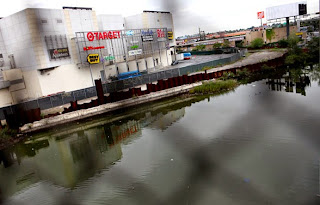 More than 800 million gallons of raw sewage flows into the finger-shaped body of water, which separates Willets Point from Flushing, every year, according to researchers.

Sludge seeps into the creek from combined sewage overflows anytime there is even minimal rainfall because the city’s sewer system cannot handle the extra water.

“Our whole mission is to promote projects that clean up the creek and we want to return it to community use,” said Alexandra Rosa, a consultant who presented the group’s plan to Community Board 7 Monday night.

The group, Friends of Flushing Creek, is composed of a number of developers and businesses, some of which own land adjacent to the creek.

Representatives from Skyview Park, Crystal Window and Door Systems and developers F&T Group are stakeholders in the group and sit on the organization’s board of directors.

Shulman’s LDC was awarded a $1.5 million Brownfield grant by the state in 2011 to explore the possible development.

Rosa, Shulman’s former chief of staff, stressed in an interview that Friends of Flushing Creek is operating separately from the former borough president’s effort, but added some of the same stakeholders in the LDC are also involved with the group.

So they're about restoring the creek because it will make money for the developers on the board. We aren't dumb.
Posted by Queens Crapper at 12:08 AM

What the hell happened with the vaunted CSO retention/ pumpout facility @ FMCP and the connection to/upgrading of the Tallman Island WTF? Wasn't THAT and an Army.Corps. of Engineers operated dredging supposed to solve the CSO issue?Or was that all just so much payola/make work/spread the $ around BS?

I hope they do clean up that filth...and while they're at it, clean up the rest of flushing too!

I'm sure what they really want to do is fill it in with concrete, kill every bit of wildlife and then cover it with ugly, cheap Asian housing.

Sorry but developers have absolutely no credibility anymore - especially in ghetto Queens!!!

Now it will get SOME version of cleaned up (probably as Anon3 said) because the developers want it. Never mind that others have been asking for decades. The money has spoken

Not for a hundred years will this happen.

BTW, I saw an Asian man crabbing in the creek last week. Next stop Flushing Hospital.

Wait till the cancers and other unpleasant things start to spike in all those hipster kids that daddy and mommy are raising next to Newtown Creek and the East River sewage and brownfields in LIC.

Maybe someone in those 40 speakers next week in the Developerfest held at Moving Image will say that - no? well, hell, it ain't their kids.

Besides, rumor has it that by the time their kids are the age of 5 or 6 most of the families have had enough of Van Bramer's spin and departed for better (and greener) pastures.

“Our whole mission is to promote projects that clean up the creek and we want to return it to community use,” said Alexandra Rosa, a consultant who presented the group’s plan

They cleaned the Hudson, they can clean the creek.

This is one aspect of our system, folks, people doing the right thing because it also serves their interests. Let the businesses do what you sure as hell don't have the money to do.

"They cleaned the Hudson, they can clean the creek."

Sure they CAN but won't.
The Hudson is one of the great rivers (actually fjord) in the USA. It is bordered by two states and multiple counties and municipalities. It is also the shoreline of a great deal of Manhattan which we in the other four boroughs know is the only borough that matters.

Of course it had to be cleaned up because the shipping industry on North River went south. Money was no longer being made there and it had to be rehabbed into a economic producer. If you look up the river GE, far away from Manhattan, is still battling about clean up and it's costs.

Little creeks will not be cleaned. What will happen is Industry will be forced out due to the urbanization of the creek shores, Newtown and Flushing. With industry gone nature will wash the creeks clean over a LONG period of time.

Politicians will promise to clean them up but it will never happen. It ain't Manhattan.