Queens screwed out of fireworks again this year 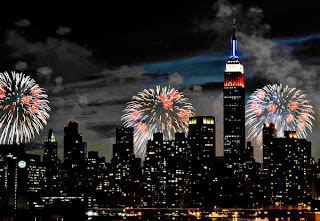 When the mayor announced in April that the Macy’s 4th of July Fireworks were moving back to the East River this year, there was excitement among business owners and elected officials that there would be an economic windfall along the Queens waterfront.
Anthony La Vigna

But a review of the plans for the nation’s largest pyrotechnic display show that the closest barge will be anchored between the Brooklyn and Manhattan bridges way too the south.

Amy Spilatnick, a spokeswoman from the Mayor’s office, said, “We anticipate that the 4th of July fireworks display will be visible in part from a variety of locations in Queens, including but not limited to a good portion of the East River waterfront. The optimal viewing areas are listed on the Macy’s website.”

Macy’s website lists several viewing spots in Brooklyn and Manhattan, but there are no locations listed in Queens.
Posted by Queens Crapper at 12:03 AM

Fireworks are s-o-o boring. You've seen one display, you've seen them all. When the last firecracker goes off, then what? Your miserable life any different?

Shows the lo-voltage of all those self appointed Queens boosters in official positions (ready Jimmy No Brainer and his ilk) that were excited that the fireworks were 'returning.'

Not to worry. The tower people in LIC will get a nice view - well at least this year's southern-most building.

Hey you can come to the astoria fireworks show - assuming that is happening this year. It usually does but that was paid for so far as I know money the vallones stole from actual parks projects in the neighborhood.

Anyway, the astoria one is awesome because the neighborhood around astoria park fills with outsiders who end up parking at fire hydrants, in crosswalks, and in strangers driveways. When all these people leave at the end of the night, they leave all their trash behind as well. Real benefit to the community.

So Fuck it, let Brooklyn have all the viewing spots. They are Brooklyn - let them deal with cleaning up the litter afterwards.

Of course, the only borough more forgotten is Staten Island.


Plus, gotta get some good marketing material going for tower development at the South Street Seaport and Domino.

George, what if I have a happy life? Can I return to it after the fireworks?

What a waste of money they are anyway....

They need to placate the bourgeoisie of Brooklyn since they don't pay their fare share of taxes in the city, they just run this filthy city with their greed and sloth.

Here is the info on the Astoria Fireworks.

Astoria Park Fireworks Monday June 30, 2014:
Get an early start to July 4th weekend with live music and fireworks in Astoria Park on Monday, June 30. Special thanks to the Central Astoria Development Corporation who sponsors this very early Independence Day celebration.
Live music from the Queens Symphony Orchestra. After the music is a spectacular Grucci fireworks show.

Afterwards, stop by the Bohemian Beer Garden or go out for a late dinner, drinks and arts in Astoria.

Maybe the Queens tower people in LIC can drive their Volvos that clog the streets to the Brooklyn Tower people and realize how the other half live.

Remember when it was ruined by sewage in 2010 and everyone was in denial that Astoria had a sewage treatment plant because Vallone Jr said it did not have one -- so it stank week after week after .. ?