Shirley sprung from the joint and tweeders party 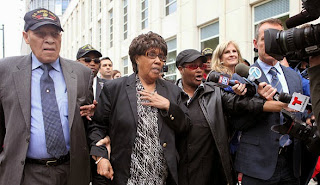 The homecoming bash was held at the Robert Ross Johnson Family Life Center.

“It was very well-attended,” Norris said of the event organized by CUCE, a coalition dedicated to empowering African Americans, where the minister serves as executive secretary. “She’s home and that’s good.”

Norris said CUCE was very proud to organize the party and emphasized that Huntley had served her time.

“She doesn’t owe anybody anything,” he said.

Huntley was sentenced to 366 days in prison after pleading guilty to mail fraud in an effort to cover up a scheme she used to pocket more than $87,000 from taxpayers.

But the Federal Bureau of Prison website shows she was released after about 10 months.
Posted by Queens Crapper at 12:23 AM

“She doesn’t owe anybody anything,” he said.

Sounds like the Queens Democratic Party's opinion of all of us.

Here in Jamaica, there is no doubt that the clergy community and the political community are a really bad combination and our community suffers greatly from this. Mix the messiah complex with crooked elected officials and then toss in the totally naive and gullible church goers and you know a community is doomed from the get go. Pretty much puppets being lead to the poison Kool-Aid.

Here we have a case in point, crook and former Senator Shirley Huntley was release from prison (two months short of her year sentence in which she plead guilty to mail fraud in an effort to cover up a scheme she used to pocket more than $87,000 from taxpayers) and a home coming party was held by the Rev. Charles Norris, Sr and some very questionable Jamaica elected officials like Congressman Gregory Meeks and Assembly Member William Scarborough (the former ranked the most corrupt person in congress two years in a row and the latter being investigated by the FBI). Other guests on the list (but no shows) were more crooks, Senator Malcolm Smith and Councilman Ruben Wills, both with their own corruption issues going on, so attending was not an option. According to another in a long line of way too many snake oils salesman church leaders in Jamaica, Rev. Norris stated that close to 75 people were there to greet Huntley. Well if you remove Norris and any of his naive followers, the crooked elected officials who where there, her family members and the press, the number is more likely ten clueless zombies.

But the fact that a “homecoming” even happened and was orchestrated by Norris and attended by other useless and crooked Jamaica leaders states much about this mess of a community that just does not have it’s shit together and is being run by the good ole boys clubs of questionable & irresponsible church leaders and the same crooked do nothing politicians. According to Norris, the event was organized by CUCE ( Clergy United for Community Empowerment), a coalition dedicated to empowering African Americans. I mean just exactly how are African Americans empowered by throwing a welcome home party for a crooked elected official coming out of jail for screwing tax payers over and doing little for her community, which has been and is still in shambles, especially with quality of life issues, which Huntley and many of the other leaders have failed to address and solve. How is anyone empowered by this nonsense.

So if any of you out there and I know you are out there, are tired of this three ring circus going on in Jamaica by our leaders, it is time to vote these good ole boys out of office once and for all. This community no longer can continue with this same old bullshit over and over again. We need to look to the future and move toward problem solving and pragmatism, which means no more Huntleys, Wills, Smiths, Cooks, Scarborougsh and especially Comries, who for twelve years allowed his district to turn into a dumping ground and his successor, Miller, handpicked by Comrie is taking us down that same do nothing path of ideas that do now work.

And that idiotic statement by Norris, "She doesn't owe anybody anything".

Oh, really. First she did not even serve the full sentence of a year (she served only 10 months). What about that $87,000 of tax payers money, any chance that is getting paid back. Let’s not forget the fact she was to serve the community of Jamaica and that service did not include serving her bank account, while the community kept going down the shitter each and every day. Sure, she does not owe anyone anything

"Reverend" Norris usually tries to intimidate people he doesn't like. Shows you what kind of person he is.

At one time going to prison would be considered shameful, and people would be very quiet upon returning, based on the fact that they had committed crimes against their community. It's pretty disgusting that returning criminals now get parties, and very few people are outraged by this.

Criminals being celebrated and honored by other criminals. Guess thats just part of the 'culture'

Wow how stupid can people be? She steals tax dollars and people still show support. Wow they truly deserve what they get!