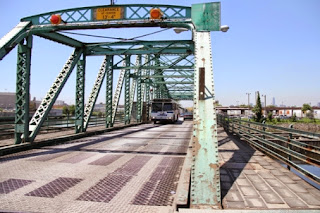 The plans to replace a ramshackle bridge over a toxic creek won’t be drawn up until 2016, officials said.

The Department of Transportation (DOT) plan for reconstruction of a 100-year-old bridge that connects Brooklyn and Queens won’t enter the planning phase for two more years, according to a DOT spokesman.

Built in 1903, the narrow bridge is a nominally two-way road that has required constant maintenance over the years. A reconstruction of the bridge would widen the bridge and also reinforce it to better withstand the weight of modern cars. Locals were skeptical.

“We’ve been through a design phase before. A lot of projects have been stalled for too long. And this project has been stalled for too long,” said Gary Giordano, district manager in Community Board 5, expressing skepticism about the department’s plans for reconstruction. He noted that the bridge on the Queens side is in Maspeth where there are many industrial manufacturing businesses.

And with the businesses comes a high volume of truck traffic that use the bridge everyday.

The DOT promised to maintain the bridge while the agency plans to plan.
Posted by Queens Crapper at 12:38 AM

The new bridge should have a bike lane to extend the Grand St lane into Queens and make it easier for cyclists there to get to Brooklyn and Manhattan.

if that hipster boat club gets what they want,will the bridge get modernized?

Isn't half of the bridge in half-wit Lizzy Crowley's council district?

Yeah, that's the most important thing to think about where this bridge is concerned.

anon5 - Did I say that a bike lane was the most important thing? Bridges don't get replaced often. This one already has cyclists going over it, but it's dangerous. The new one shouldn't be.

Every time I take the Q59 across this span, I dream of drowning in the creek, and being saved by the hipster navy.

Anon5 from Another Anon:

Have you ever driven over that bridge not during rush hour? At night that bridge is just trucks and bicyclists.

Wait until it collapses and then some action may be taken. Maybe.

And just think of all the "tasty" stuff going in by that back door to Quarex/Western Beef!

Once I saw two city buses get stuck in the middle of the bridge.One bus had to be backed down as well as all the vehicles behind it.I don't know if two trucks can pass each other but I doubt it. Seems like there were great planners in 1903, just like today.

You mean in 1903 they designed a bridge without considering how much wider large vehicles would be more than half a century in the future? Not sure you can really beat them up for that one.

And for those who think taking bikes into consideration is a waste of time, know that on the Brooklyn side there is a lane with a fair bit of traffic, and a lot of Queens residents already use this bridge to get there, often heading to the Williamsburg bridge.

Existing planning materials call for extending bike facilities over the bridge into Queens, this will only increase bike traffic over the bridge. If you make it a high traffic (both bike and motor vehicle) mixing zone, that's just asking for trouble, and will lead to crashes.

The cheapest time to make room for bikes is when building the bridge in the first place, as opposed to engineering a fix after the fact. Hopefully to avoid conflicts, and the stress and danger they bring for drivers and cyclists alike, the new bridge will have a bike lane, and at least on the bike lane it will have pavement, instead of the metal grate on most of the existing roadway.