Illegally converted house goes up in flames on SI 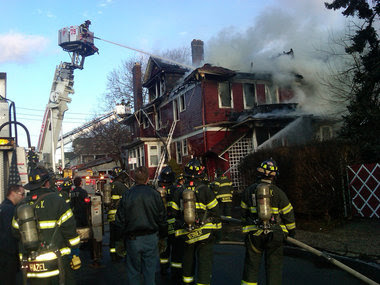 The Department of Buildings is expected to join the investigation of a two-alarm fire that ripped through an apartment building in Port Richmond this morning, according to Fire Department radio reports.

Multiple FDNY units responded to the fire at 209 Park Ave. which was reported at 7:19 a.m.

Firefighters just completed going through the entire building in search for victims at 9:25 a.m. Heavy fire and numerous subdivisions prevented them from completing that task earlier.

Six people were being treated for minor injuries, including smoke inhalation, according to an FDNY spokesman.

Red Cross is at the scene of the fire to meet with displaced residents.

In June, 2011, the Buildings Department ordered a tenant in the basement to leave because the property was not illegal, but in August, the tenant was back. In June of 2008, the attic was similarly ordered vacated by the department.

"This is so sad. There were so many people living there in such awful conditions; it’s the same story," said Maria Munoz, the principal of PS 20, which located just down the block.

Three of the children living in the home are students at the school. Ms. Munoz said their mother told her, the hot water and heat had not worked there for nearly a month, and had just been restored Thursday. She was paying $1,500 a month in rent, Ms. Munoz said.

Two other families with children at the school had been living in the basement of the home, before being ordered out a few months ago by the Buildings Department, said Ms. Munoz.

"The owners must have been collecting thousands of dollars a month, and look at how they’re living," she said, explaining how families are often scared to complain, so they quietly endure atrocious living conditions while paying steep rents.

This is the third major fire in the neighborhood since November. A fire on Sharpe Avenue Nov. 14, left a family with 10 children without a place to go. As many as 50 people were left homeless after a Nov. 25 blaze destroyed an illegally subdivided two-family home on Harrison Avenue.
Posted by Queens Crapper at 11:42 AM

EVERY NEIGHBORHOOD ON EVERY STREET there is "AT LEAST" one illegally converted apartment.

There are certain buildings in Flushing that I know of that are >60% of the apartments being/having illegal conversions.

Cause the city council is not forcing them, George.

Remember, we are doing everything we can to evict Archie and Edith for the filthy rich and proles.

Besides, there are all those campaign debts to pay off and all that cement that needs to be poured, eh?

FWIW: THIS is what 'free enterprise' looks like in housing.

When you have a gutted and corrupt system of regulators run by landlord sycophants and sanctioned by a 'less government' credo, the lowest rung feels it first and worst.

But make no mistake, w/out regulation and enforcement these conditions will come to a home ot building near you.

The 'market' will demand it.

43-31 Bowne street Flushing N.Y. 40+ people from the attic to the basement and a shed in the back of the house turned into an apartment ;-(

Think for a second.

If every illegal conversion were treated like they treat drug houses, there would be NON STOP raids EVERYDAY all through QUeens.

But since raiding peoples houses/buildings/dwellings that are OBVIOUSLY illegal converted is not as profitable as the war on drugs/prison industrial complex and is not politically correct there will NEVER be anything done about illegal conversions, ever.

This is NOT what Free Enterprise looks like in housing. Murder, assault, arson, are not permissible in a society based on Objective laws. But definitely in a society based on anarchy. The free market is not anarchical. Building codes are morally compatible, part and parcel, to the free housing market.

What worries me most about these illegal conversions are firefighters getting injured and killed trying to make rescues. I've lived near some of these illegal conversions (in one first floor apartment in Staten Island, I heard noises in the basement and when I went to investigate discovered my landlord had converted the basement into a rental for five Mexicans) and they're dangerous for everyone concerned. Limited egress and the people who live in these spaces know zilch about fire safety. I got out of that lease pronto - she was only to willing to release me from the agreement as I suspect she had plans to pack my first floor 2-bedroom with an entire village. I've often wondered what would've happened if I reported her. I worry about the guys from the local firehouse trying to make a rescue.

"George" -when a conservative pleads an objectivist case, they are talking out of their asses.

The typical objectivist's credo in this sort of thing is "get the Government out of (in this case housing) let the market decide.

Ayn Rand was a sick, vengeful old tool whose precepts have been discarded by most thoughtful, decent persons.

Get with the program, knucklehead, 2011 marked a year of strong readership of Ayn Rand. Total sales of all English editions including eBooks of Atlas Shrugged was roughly 350,000.

BTW an Objectivist is not a conservative. So who ya calling a "conservative"?


"Who are the 'conservatives'? What is it that they are seeking to 'conserve'?

It is generally understood that those who support the 'conservatives,' expect them to uphold the system which has been camouflaged by the loose term of 'the American way of life.' The moral treason of the 'conservative' leaders lies in the fact that they are hiding behind that camouflage: they do not have the courage to admit that the American way of life was capitalism, that that was the politico-economic system born and established in the United States, the system which, in one brief century, achieved a level of freedom, of progress, of prosperity, of human happiness, unmatched in all the other systems and centuries combined—and that that is the system which they are now allowing to perish by silent default.

If the 'conservatives' do not stand for capitalism, they stand for and are nothing; they have no goal, no direction, no political principles, no social ideals, no intellectual values, no leadership to offer anyone.

Yet capitalism is what the 'conservatives' dare not advocate or defend. They are paralyzed by the profound conflict between capitalism and the moral code which dominates our culture: the morality of altruism . . . Capitalism and altruism are incompatible; they are philosophical opposites; they cannot co-exist in the same man or in the same society. -Ayn Rand
“Conservatism: An Obituary,”
Capitalism: The Unknown Ideal

Folks, within a year of transferring ownership to a corporate entitity this building began racking up illegal conversion complaints - filed by, among others, the FDNY. Finance records show HPD has ERP liens filed, DOB had been out many times, and several DAYS before this fire DoBs Administrative Enforcement Unit accepted documentation showing that the illegal conversions no longer existed!This is, as usual, a failure of SO many different agencies it boggles the mind. Records uniformly show this as a two-family - so why did HPS get involved? why did AEU accept "proof of cure"? Why didn't DoB follow up (well, that's standard...) Why didn't DoFinance jack up the taxes when the HPD charges hit?

As I recall, the IRA took down Capone. Perhaps NYC DoF can get rid of these criminals?