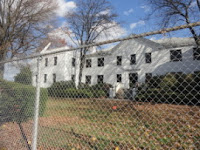 The city has still not designated a locale for a new northeast Queens high school due to a lack of available spots and transportation concerns, Community District Education Council 26’s chairwoman said.

The School Construction Authority has considered several sites, mostly in Bayside and Auburndale, for the school. But the city has nixed the idea of building at the former Leviton manufacturing facility’s property.

Jeannette Segal, CDEC 26’s chairwoman, told board members that the site for the new school had been discussed during a recent meeting at the Queens Borough President’s office.

“We touched upon the overcrowding of high schools but, as always, there was no resolution,” Segal said during last night’s monthly meeting. “The problem is there is no land. And the problem with building too far east is transportation – getting kids there is not cost effective. They are looking more to the west.”

There are no high school kids in eastern Queens that would utilize this school? Is there not a problem getting kids to schools where there is no subway, like Maspeth, Bayside and Forest Hills?
Posted by Queens Crapper at 12:16 AM

The Maspeth High School will be serviced only by the Q58/59, the Forest Hills High School by Q11, Q54 and Q23, and Bayside by Q28 and 31, so why couldn't a school at the Leviton site be serviced by extending the Q46 and Q30 by one stop? They seem so hell bent on putting these schools where there is no subway service, yet somehow open them up to kids across the city, but the logic is not consistent.

I like to know why the folks of Queens are silent as the rest of the borough is stripped and starved of resources to pour into the waterfront.

Library overcrowded? no problem in LIC - they are getting a new one (built in the Queens Library style with lots of money and skeleton staffing and limited hours)

Schools overcrowded? no problem in LIC - they are getting a new one (planned for people that don't even live here yet)

Power grid shaky with flickering lights in the summer? no problem with LIC - (with you paying the infrastructure costs out of your own utility bill while the wiring in your community rots).

Annoyed with noise from airport, neighbor, railroad? no problem with LIC - with all the trustafarian youngsters coddled by the pols everytime they loose a little beauty sleep.

Annoyed with traffic backup and construction delays? no problem with LIC - your taxes ready for a personal shuttle for the youngster to Grand Central.

So schools being overcrowed? No problem - you are in the pocket of the political hacks and they can do anything they want knowing that you might bitch but you will do nothing important.

In the end, you will go along.

Leviton's former site is close enough to eleviate the over crowding at Dozo, Queens High School of Teaching and even Van Buren. There was a bus that ran up little neck pkwy but obviously it's outer borough so the city shut the line down. Eminent domain that property and let's build a school! And not a dinky specialized small school, a real 2k sized school.

That Leviton building is right down the street from some nice pool clubs and residences. I am sure that's why they don't want it there.

Auburndale is in District 26? Since when?

There is no (as in zero) public transit to the Leviton site. The Q79 bus was killed two years ago, and as mentioned, high schools need access to the whole city. Now if you want to talk park-- the Leviton site is great.

They can extend the Q46 and Q30 each by one stop. And they can run special buses from transit hubs straight to the school like they did when I was in school.

it is not the pupils that need these distant .lack of public transportation, high school sites.

it is the TEACHERS and United Federation of Teachers Union.

in 2009, when the publishing industry was beginning major magazine closings and layoffs ,I.S.25 had a$ 2-4-million play ground to park conversion. presently no bodies have been seen sitting on the many benches,near many trees.

click "report card" for this data on their school site.

For those of us who don't know where approximately is the Leviton site?