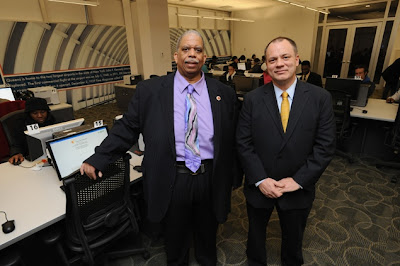 When it opened more than 45 years ago, the Queens Central Library in Jamaica was touted as a state-of-the art facility, offering the latest in customer convenience and library research.

But the traditional stacks of books and rows of tables and chairs are now being replaced with plush seating and computers as the library embarks on its largest and most ambitious renovation to date.

“Libraries are no longer just places to sit and do research, they are places to go,” said Queens Library CEO Thomas Galante.

Galante and City Councilman Leroy Comrie celebrated the latest phase of the library’s transformation on Thursday when they officially opened its expanded and revamped Cyber Center.

The center has 72 computer workstations, printers and a scanner.

A long line of customers waiting to use the computers grew during the short ceremony - an example of the vital role they now serve in libraries.

Use of the computers is free for anyone with a Queens Library Card.
Posted by Queens Crapper at 12:18 AM

Somebody is getting ripped off.

Ah there is that library capital budget again!!!!!

the computers may be FREE to the users, but every one with a land line phone is paying a involuntary fee each month on their phone bill. TAXATION WITHOUT REPRESENTATION STILL EXISTS.

To Anony #1 you are clueless as to what this equipment is and what is on them and how much it costs! Microsoft and the hardware manufacturers charge a lot of money for this stuff. These machines have to be designed to work with the disabled people as well as regular folks thus needing special software and applications for them to use. You think the library just gets its equipment from Costco plugs it in and goes about their business? Warranties cost money, applications cost money support cost money. etc... etc...

how many American citizens are employed by the QBPL? and not naturalized immigrants. how many Americans who were born in Jamaica, Queens & who still live there are paid staff of the library?

the QBPL cares more about illegal immigrants that it does about voters.

Its a great place, but too bad that its in Jamaica. Its not worth getting stabbed to get a free book.

Somebody is getting ripped off.

Somebody should write to Jimmy Van Bramer - he knows whats going on.

I've been going to that library since the day it opened (literally). Never been stabbed.

“Libraries are no longer just places to sit and do research, they are places to go..."

Drop off your screaming, mouthy, crying jag kids who are too self-absorbed and emotional to control their volume!

WTF does QBPL have to do with voters? And anybody who works for the library has to go through a very strict NYC hiring process.

Both taxpayers and voters suffer from the same delusion: that because they "vote" (or pay their required share) they get a line-item veto! Absolutely hilarious.

- a welfare recipient to figure out how to get more benefits

I am so glad that I do not live in NYC. Its was OK when I did but now NYC is a cesspool on a good day.

the U.S. taxpayer ,with a home phone, pays the library and public school computer internet connection fee on their monthly bill. you can not move away from this.

Al Gore and W.J.Clinton snuck this cost onto your bill, but the phone companies decided to post the cost on your bill,and alert you.

the internet companies were the largest donors to the Clinton/Gore campaigns. what a scam ????

the cost of replacing these computer printer INK CARTRIDGES and PAPER must be a never ending
fortune?

Did not R.A. Cheney and G.W. Bush have the opportunity to change this when they were in office and their party controlled both houses? Why didn't they?

The libraries do go through a lot of paper and toner cartridges, by the way. That's why most of them charge you 15 to 25 cents a page to print something.

Compare the Queens library hours and staffing to the other boroughs.

Compare the Queens library capital budget to the other boroughs.

Compare the Queens library board of developers to the other boroughs.

the library print copies are free for the first 20 copies.

do you recall that the Bush administration had an event , the worst enemy invasion of the Nation's history, named the World Trade Center Terrorist bombing by the Middle East Muslims ,to deal with? after the Clinton Adm. enabled this event .

do you think that this invasion was more important ?

And W. had plenty of time to do a lot of things, including clearing brush off of his ranch and playing golf, both before and after 9/11. He didn't have time to change some federal regulations?

Don't tell the guys at the Central Library. They may not like it.

Over the past decade, the Central Library, which had previously been Queens' research library, has been turned into just an ordinary branch, as its unique holdings have been either discarded or sold off through Better World Books. If you were doing a research paper for college, you went to Central to get books (both circulating and reference) that were not owned by your neighborhood branch and often not even by your college library. But now they've turned it into the Jamaica Branch. I'm actually surprised that they kept the Long Island Division (now known as the Archives at Queens Library) together. The staff is completely demoralized. When you went to one of the subject divisions (e.g., History Travel & Biography) you'd get someone who really knew the collection - now they bounce librarians from section to section throughout the day, and the consequence is that very few of them know where anything is, let alone experts. Thank God the old-timers retired before they saw what happened to the place. The Director of the QL, who changed his title to CEO, has presided over the dismantling of a once great collection formerly known as the Central Library.