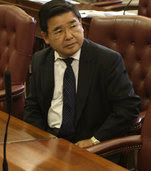 Peter Koo, one of only five Republicans on the 51-member City Council, is set to announce early next week that he will switch parties to become a Democrat, according to people briefed on the decision.

Mr. Koo was elected in 2009 from the Queens district previously represented by John C. Liu, a Democrat who is now the New York City comptroller. His election came as a bit of a surprise — at least to people who live outside Flushing — because the district is strongly Democratic. But Mr. Koo, who spent more than $277,000 of his own money and received the endorsement of Mayor Michael R. Bloomberg, is a well-known community leader and has been called “mayor of Flushing” by some.

Mr. Koo has also been a strong supporter of Mr. Liu, who is considering a run for mayor, and was listed as a bundler of donations in Mr. Liu’s recent campaign finance filing — though for a relatively small amount: $7,200.

There were differing accounts, from people familiar with his decision, about his motivation. Some said that he did not feel appreciated by the Queens Republican party and that infighting in the county organization had made him increasingly uncomfortable. One person who had been briefed on his decision said Mr. Koo believed that as a Democrat, he could get more city money for his district, could increase his odds of becoming a Council committee chairman and could do more to support aspiring Asian-American politicians in the city.

No, it's because there's no competition if he runs as a Democrat. You need that spelled out for you?
Posted by Queens Crapper at 12:13 AM

Welcome aboard Mr. Koo. They didn't have too many bad things to say about you and on this blog that is a step in the right direction. I prefer to believe that you changed over to the Democratic Party because you believe in it's values. I guess we'll see...

"I prefer to believe that you changed over to the Democratic Party because you believe in it's values. I guess we'll see..."

HaHaHaHa!!!! And you meant "its values" not "it is values"

Peter Koo should be called the "mayor of Great Neck", because THAT'S WHERE HE REALLY LIVES!

Yes, that's WAY OUT of his legal district!

But who really cares?

Most Democrats...like the Staviskys...have lived outside their district for years.

Yes, Joe really lives in the Beltway, in case you haven't already guessed!

Now we'll see the Stavisky dynasty line up behind Koo.

I wonder if some of that $500,000 a year that Toby Ann gets for her "North Flushing Senior Center" will be diverted to the Democratic Koo's cmpaign.

Or will he finance it from his "Starside" drugs empire?

Somebody's got to pay those high "Parkside Group" bills!

Peter Koo believes ONLY in himself and his "Flushing Commons" builder-friend Michael Lee.

Koo doesn't want to lose his foothold in Chinatown-Flushing!

A politician would switch to the Nazi party if he thought it would get him re-elected!

Give me a good stiff broom and a Clorox filled enema bag and I'll clean up Flushing's political corruption.

Committee to elect the Flushing Phantom for City Council!

Al Centola for my chief of staff!

Is Mc Clelland going to remain as Koo's translator?

You can hardly understand the CM's "Chingrish"!

Dennis Gallagher is behind this!

Welcome aboard Mr. Koo. .... you changed over to the Democratic Party because you believe in it's values. ...


(chortle) Got that right.

Could have inspired young republicans

A Democrat! ! One step closer to the Slammer.

Now that Koo is a Dem,
The message is clear,
Get your members items here!

that is why he has to change parties. he was a mole all the time. a check of his CM campaign finance donations will probably show that LIU and he have the same asian donors.

"Welcome aboard Mr. Koo. .... you changed over to the Democratic Party because you believe in it's values. ..."

(and yes, I'm too stupid to know the difference between "its" and "it's")

It doesn't matter which Chinese candidate gets to run downtown Flushing...Democrat or Republican.

It's been flushed down the crapper, sonny!

The tongs and secret societies rule
all the way from China!

So Koo switched from column "R" to column "D" on the menu.

I think that I just shit my shoes laughing!

i guess koo just wants to experience what life in a jail cell is all about?