Billboard that collapsed was illegal 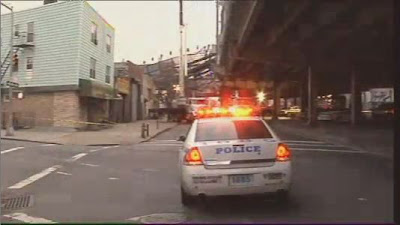 The slogan for the New York Lottery is "Hey, You Never Know," and only part of it remained early Saturday morning as crews worked to remove a collapsed billboard in Brooklyn.

The sign was atop 421 Meeker Avenue. It came crashing down Friday afternoon on the westbound side of the Brooklyn Queens Expressway, sending debris flying through the neighborhood and onto the BQE.

A car and nearby buildings were damaged. Officials at the Department of Buildings say advertisements at the location are illegal.

DOB officials say the city has been cracking down on illegal billboards since 2009, but it hasn't been easy since many are old enough to be exempt from new restrictions.

So the State was advertising on an illegal billboard? How appropriate.
Posted by Queens Crapper at 12:42 AM

DOB needs to be investigated. With all of the stories about illegal house conversions, fire traps, and now huge billboards illegally built in dangerous positions, what's going on???? Hasn't anyone noticed that these billboards have been standing illegally for over 10 years??!!!!
DOB inspectors have to be taking bribes, no doubt about it!
What say you Mayor Doomberg??????

Hey, Democratic party hack Guv Andy...
if you can pry your lips from Obama's ass...take the time to see what's up here1

You hit it fella...
DOB...THE DEPARTMENT OF BRIBES !

An illegal billboard is very hard not to notice. On the other hand maybe they werent trained in distinguishing if it is illegal or not.

If a billboard is there a lot of people might think theres no way that got up there illegaly so it must be legal? IDK