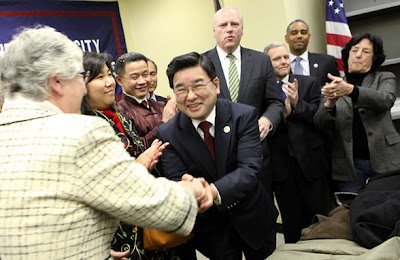 Councilman Peter Koo, who recently switched parties to the Democratic Party, said the media’s treatment of New York City Comptroller John Liu has been biased and wrong in a recent interview with Roberto Perez.

“As an Asian-American politician, I think it’s really unfair,” he said. “I think the media, they ganged up against him.”

Mr. Koo went on to defend Mr. Liu’s integrity. “It’s [not] proven that he directly knows about this, or his staff knows about this, so why do you link the two together?” he asked. ”The FBI used some sting operation, they offered cash to people, it’s like a political entrapment to me. I think it’s really unfair. Even though the guy is guilty, … only he’s guilty, he has nothing to do with John Liu.”
Posted by Queens Crapper at 12:05 AM

Aw, come on already!!!! This is getting ridiculous!!!

KOO and LIU and Choe, EEny and Meeny and MOE....

You're off the beam, CM Koo Koo and likely a crooked bundler yourself if you're on Liu's team.

Why else would you defend him...just because he's Oriental?

Oriental or Occidental...Liu has been caught with his pants down... crapping all over American democracy!

John Liu is NYC's comptroller and should know what's going, financially, on in his own campaign.

When the f---k is the press going to get on Koo for living in Nassau County (Great Neck)...WAY OUT of his district?

Hey, is that "Honest Joe" Crowley in the background?

Innocence by association with criminals! Koo realizes he has been missing out on all that bundling and along with big time Rep Crowley as a puppeteer pulling the strings!

Koo probably has a summer house in Virginia where "Honest Joe" lives. If these politicians don't obey the residency laws, how do you expect them to honor and obey local laws?

Criticizing the loose ethics of an Asian-American politician does not make one anti-Asian, it just shows that one is against loose ethics (or crooked and maybe illegal practices). Just like criticizing an Israeli policy doesn't make one anti-Semitic. Playing the race card (or the religious card) is just a smokescreen.

He was one of his bundlers to boot!

Communists do not adhere to the U.S.Constitution.

for the Chicom offense against any threat to their MARXIST-LENINIST IDEOLOGY, SEE WIKIPEDIA :"THE FALUN GONG" AND "THE EPOCH TIMES".

NYC,(FLUSHING) groups have been trying to warn Americans,but the chi-coms own the media,who is in fear of their power.

America has been infiltrated locally through our left wing groups, and union/ politcal/ gangster government.

LU LU KOO KOO - When you get some free time. Drive around Queens. Take a good luck. Flushing and Bayside has and continues deteriorate right before our eyes.

Perhaps you can appease some of the irrate taxpayers in Queens that are feed up. You might try putting some effort into educating the majority of your constituents that the laws apply to all of us. They are not exempt.

Encourage the notorious developers and contractors (I believe you know who they are -- and if not you can research that) to abide by the zoning regulations and building code and other pertinent laws.

All you have to do is walk through Bayside and Flushing to see how the environment has changed. Just a few examples:

Huge trucks with graffitti parked illegal in a residential driveway on a 40 x 100 property. Balconies and patios with wash drying on them. Hangers with clothes hanging on mail boxes to dry on the stoops of Million Dollar Houses. Piles of shoes outside the doors.

Bicycles/barbecues/storage boxes/toys piled on porches, patios and balconies. Some of which are probably fire hazards.

Business signs on residential properties for accounting services, etc. in zones where this is forbidden.

Neighbors are made to live with these deplorable conditions. about this.

Koo got rich off his "Starside Drug Store" empire.

He was probably just an opium dealer in the old country!

This is a disgraceful and racist argument by NY City Council Member Peter Koo. It's an investigation and it has not a single thing to do with the color of a person's skin, their religion, or any other cultural issue.

And Mr. Koo knows it.

It's vile that Mr. Koo is willing to toss the real problems of racism and bigotry down the toilet to score a cheap political point, with anyone, for any reason.

There are real problems in this country, even though we have made great strides. I must say that unlike many countries that wallow in racism at the very least in this nation we are facing the problem. It's not erased by any means but in the last 50 years it has improved immensely. I hope we can continue to make progress.

It's those who are happy to use real problems that we face as a means to help themselves that are hurting race relations in America.

Mr. Koo, stop this cynical and evil act of pretending there is racism when you know for a fact that all that is happening is an investigation of criminal wrongdoing.

I understand that the "bundler" is co-operating with the Federal Investigators. You have an obligation to (frankly) STFU and let them do their job. It's not your job to insert yourself into a judicial proceeding.

I have experience with John Liu inserting himself into a judicial proceeding, it was racist, it was annoying and in the end it proved several things;

A City Council Member has no business trying to influence a judicial proceeding.

A City Council Member will fail if they try.

John Liu is a massive fool.

I'm not saying he wasn't annoying (he was) I'm saying that at the end of the day we all laughed at what a low class and frankly stupid moron he was.

I was ASTOUNDED that the voters of NYC were fool enough to vote for him, even as I realize that he is simply a tool of certain special interest that want to use him and could care less about him.

John Lui's father worked himself into a position of power as President of the Great Eastern Bank and then used that position to commit Bank Fraud, he was arrested, tried and convicted. I do believe that children typically grow up and accept the morals of their parents so I am not surprised by the investigation of course.

Having said that it’s just that, an investigation, until we hear more we don’t need to listen to a City Councilor tell us the results of any investigation by another branch of government.

Mr. Koo has, as a member of a second branch of government, the obligation to exercise his Constitutional right to remain silent and let justice take it’s course.

if you have had your S.S.I. benefits reduced because of 1970-1990 calculation errors, in the Flushing office,think back to when you challenged John Liu at a public meeting ?

save all of your W-2 and payroll data , it will protect your benefits from the scoundrels in government.