City to unveil its latest scheme to mess up the marsh 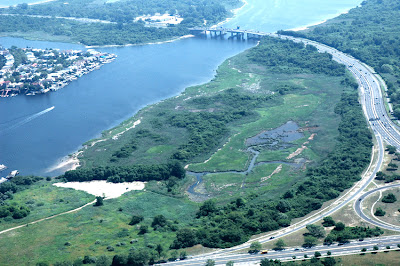 Community Board 18 will present the NEW PLANS for the Four Sparrow Marsh area -
WEDNESDAY, JANUARY 18 @ 8 PM, Kings Plaza Community Room (enter near the garage on Flatbush Ave., the community room is to your right)

"Named by naturalists Ron and Jean Bourque, Four Sparrow Marsh Preserve is home to four native species which require undisturbed marshland for nesting: Sharptailed, Seaside, Swamp, and Song Sparrows. Because of its relative isolation from residential areas in Brooklyn, Four Sparrow Marsh Preserve has been allowed to remain in a fairly natural condition. This makes it ideal for many permanently nesting species, including several types of ducks, gulls, and wading and woodland birds, as well as for the common seashore mollusks and crustaceans which feed those birds. It is an important part of the Jamaica Bay estuary system. "

Note the final sentence: "It is an important part of the Jamaica Bay estuary system".

Last winter, the NYC Economic Development Corp. announced plans to turn a sizable portion of the marsh into a shopping mall. Although the site was marked by Parks Dept. signs, it turned out that the land had never been officially turned over to the Parks Dept.!!!

A number of us went to the Feb. 2011 Scoping Meeting. We've been to a lot of these meetings, but there was something really off kilter about this one. I remember turning to my colleagues & saying "something isn't right here". Several weeks later, we learned that State Senator Carl Kruger had been indicted, for among other things, being in cahoots with the developer. That was why things didn't feel right.

In the fall of 2011, the plan for the retail center was withdrawn. However, there are still plans in the works which may impact a small portion of the area that everyone thought was parkland. The new plans for development on the Toys R Us site are similar to what was previously announced (a car dealership & renovation/expansion of the existing marina). This will be built on the existing parking lot, etc. of Toys R Us. But there is an additional strip of land south of Toys R Us that is also included in the development. We need to see if this will intrude on the parkland of Four Sparrow Marsh.

We also need to insist that the remaining 60+ acres of land is OFFICIALLY turned over to the Parks Dept. Otherwise, there is a good possibility that sooner or later this site will be turned over to developers.

We lost the Vandalia Dunes to the Gateway Mall. Let's make sure that Four Sparrow Marsh does not suffer the same fate.
Posted by Queens Crapper at 12:22 AM