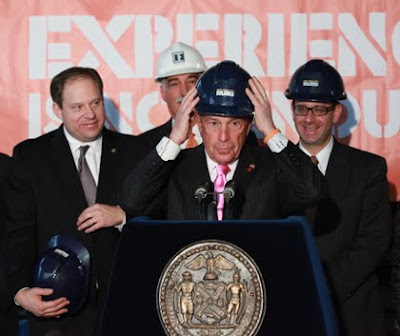 Mayor Bloomberg’s visit to an unfinished Long Island City high-rise last week capped a series of upbeat announcements about how safe the city has become.

With crime and fire and motor-vehicle fatalities headed the right way, it was the Buildings Department’s turn to reveal its winning data.

“The great news keeps coming, this time in the arena of construction safety,” the mayor proclaimed alongside beaming elected officials and real-estate executives.
He added that construction injuries had plummeted 37 percent, from 241 in 2009 to 165 in 2010 to 152 last year.

There’s just one problem: The mayor’s numbers from last Monday don’t match those on the city’s Web site.

Buildings officials now say that the higher figures, which can still be found under Citywide Performance Reporting (CPR) at nyc.gov, were a mistake and that Bloomberg’s lower ones were correct.

Whatever the explanation, the snafu is, at the least, deeply embarrassing. Bloomberg has touted his administration as one built on data backed up by transparency. So why didn’t anyone spot numbers that were wrong four years running?

Because when the stats are fake, it's hard to tell.
Posted by Queens Crapper at 12:04 AM

Those cooked books are sizzling hot!!!

How many construction workers were employed each year? If there were 150 injuries out of 5000 workers and 250 injuries from 10000 workers, then the 150 is actually a higher number of injuries.

I guess in the photo, that shrimp is preparing for when lightning strikes him.

Great News in the Arena of Construction Safety - Which is seriously deficient in spite of the new code; heightened enforcement and new safety initiatives. Who are they kidding?

I guess the fatality and injuries that occurred on January 11, 2011 at the Huang site on Queens Blvd. are part of the 152 number. It could have been 151.

Seemingly, the City has not concluded their investigation yet. No release of the investigative report as yet.

Perhaps had the DOB followed through with the 2007 Huang Initiative presented in by Commissioner Lancaster to a Congressman the Queens Blvd. collapse would not have been able to have happened.

The DOB was suppose to (excerpts only, as the presentation is pages long, and most of which never happened):

1. Regularly inspect the Huang sites
2. Bring projects into compliance
3. Ensure compliance with SWOs
4. Make them aware that the eyes of the DOB are focused on them
5. Public can assist by reporting violations, etc.
6. DOB to gather evidence (you have to ask for what). Enforcement?

Did John Liu go to that funeral and speak?

"Pinocchio's" nose grew longer with every lie he told.

Bloomberg gets a daily nose job to hide it's growth.

You voters should have hanged "hizzoner" at the polls.

Continue to bask in the light of his 3rd term until it's over and we can all breathe freely once again.

Did "Mr. Comptroller" help to pre-warm the ledger pages before Mike cooked them?

How about this one: complaints to DoB about workers without harnesses are met with: OSHA issue. Resolved. This after the jerks spent big bucks on banners and leaflets in every language ever spoken showing a man in a hardhat with a child and "if you fall they fall"

Like everything else about this lying sack of s***, it's fake and/or cooked.Did you know it only takes 50.000 signatures to launch a recall?Hasn't the carpetbagger midget done enough damage to us already?