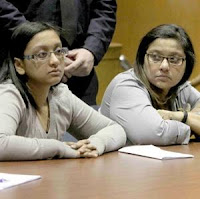 A seething Queens judge walloped three members of a crooked Richmond Hill family yesterday, sending them upstate to serve a combined 418 years for a brazen immigration and real-estate scam.

Holder said his harsh sentences are nothing compared to the street justice the Ramsundar family would have faced back in their native Trinidad.

“You and I know, that if you did this fraud and paraded and strutted it in your own country, you would have probably been hacked to death,” Holder told the family, which immigrated from Trinidad in the ’90s.

Holder had no sympathy for any of the grifters. The tough judge even had one victim, who suffers from multiple sclerosis, stand up in court, so Shane could see him. Holder said the family’s crimes nearly killed this victim, who lost so much money he couldn’t afford medication.
Posted by Queens Crapper at 12:27 AM

Deport them back to Trinidad as undesirable aliens!

Why should the USA have to pay for expensive incarceration?

Good ....The judge is correct... they would have been beaten to death in their country. They hurt so many people they deserve the jail time they received.

deport them. don't let them or their other children stay in the US. make them pay restitution. Of course they were involved w/ shady real estate, this is Queens.
the land of the slumlord. bet they harassed tenants in illegal basement and other defective c of o dwellings. no doubt they are well known in Queens housing court.
find out how many HP actions have been taken against them. the City ought to go after those fines like a pitbull.

"Holder said his harsh sentences are nothing compared to the street justice the Ramsundar family would have faced back in their native Trinidad."
. .. . ..... . . . .
But the question is: what sentence would the judge have imposed if the family's name was "Kelly" and not "Ramsundar"

Diversity is our STRENGTH!!!!

This story is nothing new. This has been going on for over 100 years. The Irish rip off the Irish, Italian's rips off Italian's ,etc...
It's always easy to rip off those in your same ethnic group or faith. It's a false sense of trust that occurs in the one's that need help.
I'm sure you all know people that only would hire others in their same ethnic group. If you do your bound to get screwed.
Hire people based on their qualifications not race.
These people deserve what they received , hopefully others will take note, but it will always go on.

Hello All,
Where is your heart clearly these folks were victims of a political game.
Let say this family have scam these so call 12 victims of all this money where did it go? This family lived in a rat infested basement apartment in Richmond Hill. Yes they own a dog but so do a lot of people. Mrs. Ramsundar worked and so did her daughter. They held job and worked like many hard working Americans.
These so called victims some of them didn't even have jobs where did they get the money from. This family did not lived a larvish life nor did they drive fancy cars.
Where is the justice in this world a family has been destroyed by a bunch of liers.
Just remember you can lie to man but not God. He knows the truth. Leave this family alone!

Gotta watch those off shore islands - full of all sorts of unsavory types.

This family has been robbing people since 1990 ,since then,shane told people he was an immigration officer ,he robbed some of his close friends .

Deport them and their entire extended family. seize their assets and properties. let homeless Americans live in their properties for free.

For the Anon Person who says, "seize all assets and properties." I agree with you 100%. The city should take away all assets. It is sad, his Teahers Lewis Pancham, & his lover Sabita Hewick and Davendra Sukhu at 107-37 Inwood Street and 150-20 Linden Blvd in Jamaica Queens did not teach Shane and his family to protect themselves from the LAW like they does. They only teach him how to scam people like they do.