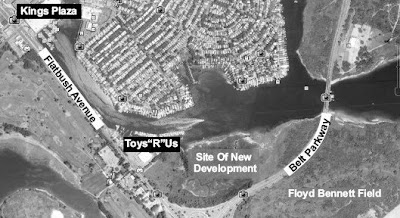 If developers have their way and the city can cut a deal with environmental naysayers, Rockaway residents may one day have a new shopping destination just north of the Gil Hodges Marine Parkway Bridge in Brooklyn.

Because of the proximity of the marsh, the plan has drawn criticism from local conservation groups.

While members of that area’s community board have warmed to the idea of a new retail center, some conservation groups are worried about the environmental impact of the proposed project on Four Sparrow Marsh.

The plan calls for a 110,000-square foot Cadillac dealership to be built next to Toys R Us on Flatbush Avenue. The project is scheduled to begin the city’s land use process this spring. Developer Forest City Ratner Cos. will oversee the project, breaking ground in 2014.

There are currently two proposals for the retail center. One would allow Forest City Ratner to erect two buildings for a total of 138,000 square feet of retail space for multiple tenants. The other calls for a single 127,000-squarefoot building with one tenant.

The plan “does try to buffer the development site from the natural area. However the buffers are pretty small and we think they are inadequate,” he said.

Under the proposed plan, Four Sparrow Marsh would also become officially mapped parkland overseen by the city’s Department of Parks and Recreation. It would remain off limits to the public as a nature preserve.

God knows we have too much nature in this city and not enough Bruce Ratner projects! Thank you, Mayor Bloomberg, for this wonderful project in line with your PlaNYC 2030 goals. Just like this one.
Posted by Queens Crapper at 12:15 AM

Because the Gateway mall was not enough, Jamaica Bay needs another mall near its shore.

Look at all the retail spces that are half empty....no one has $$$,and many who do shop ONLINE. The days of physically going out shopping are declining.Wait till gas goes over $4 a gallon.......lots of empty retail space........

If Breezy Point residents need a mall near their home, let them build one inside their pristine enclave.

The people need to grow some balls and give certain people an education from a civilian point of view.
The Egyptians have it right, they are sending there shit and greedy elite bastards fleeing to Dubai.
Just like the Egyptian army I doubt the NYPD commanders and cops will lift a finger if the shit hit the fan in NYC.
Payback for being throwing their family's and them down the toilet.

This mayor is worse then Hitler and is destroying at least as many lives.

Typical Bloomberg mob enrichment of the wealthy at the average citizen's expense.
A Shanda !

Why create competition in the middle of slack sales. This will injure existing merchants as well as the environment.

Anonymous, where on earth did you read that Breezy Point residents are asking for a new mall and a Cadillac dealership at that? Now if this article had said beer distributor you might have a point but I would hate to be a car dealer trying to sell Caddys in Breezy. Just Saying. In any case, as others have pointed out there is vacant space all around Kings Plaza and Gateway Mall - no reason to breakup a wetland.

"This mayor is worse then Hitler and is destroying at least as many lives."

What a dumbass statement. What's the weather like up your own ass

Speaking as someone who grew up in Mill Basin...

There's no need for additional shopping or housing. There's a neighborhood real estate slump, and the Kings Plaza mall shopping is depressed. (Who is buying a cadillac in 2011??) And this project will further congest the already crowded Belt Parkway.

Are you listening Mr. Bloomberg?

Would you like to REALLY benefit the residents of my hometown and surrounding areas?

Something to truly benefit residents and businesses and revitalize the southern end of Brooklyn??

Extend the 2/5 NYC subway out there.

Shut-up and put up with it or MOVE !
My friends like Ratner and the poor in need of $4 Wal-mart shoes come first.

Mike "The King" B

NO ONE buys Cadillacs anymore.

A Cadillac these days is a piece of sh*t just like a Jaguar.
Warping Aluminum heads on a steel block, wheel hubs made in Brazil, crap electonics.
Drive around with the check engine light on for the life of the car.
I have a Dunbarton Green 1976 501 DiVille ---the last of the good ones

I have friends in Breezy Point none of them are rich. They inherited their property's and struggle just to pay the taxes and give their kids a a peaceful education in a 100% white English speaking school