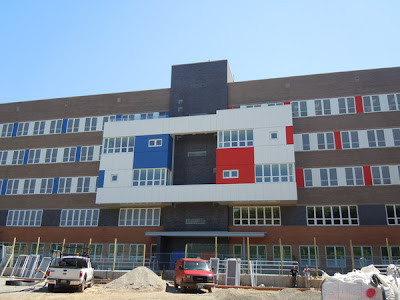 Queens Metropolitan Educational Campus, the brand new school building in Forest Hills, could get a bit more crowded next year with the temporary introduction of a new high school class in the building.

The Department of Education announced this week that they are proposing to add one grade of an as-yet unfinished Maspeth high school to the campus, increasing the number of students there by as many as 225. The plan would begin and end with the 2011-2012 school year.

City Council member Karen Koslowitz, who advocated for the new school on Metropolitan Avenue for years, said she had serious reservations about the plan.

“I am very concerned about the impact that the proposed incubation of the Maspeth High School will have on the Metropolitan Avenue Campus,” Koslowitz said. “I am sending a letter to Chancellor Black to spell out these serious apprehensions, which include location of the school on the campus, amount of students and length of the incubation.”

Department of Education spokesman Jack Zarin-Rosenfeld said that in areas with school shortages like Maspeth and Forest Hills, finding new spaces to put students is a big issue for the department.

“Our priority in Queens and in Districts 24 and 28, is to really get high school seats up and available as quickly as possible,” Zarin-Rosenfeld said. “The schools on the Metropolitan Campus are now, and they’re phasing in, growing one grade at a time, so that’s a lot of space that’s sitting unused.”

I was just curious if there was an announcement about what focus the Maspeth High School would have because they were seeking feedback about it this past fall and to my knowledge have not made a decision yet. So how can they "incubate" the new school at the Forest Hills campus if they haven't stated what kind of curriculum it will offer? New high schools admit kids from across the city so I don't understand why getting high schools in districts 24 and 28 up and running quickly is a priority.

Oh wait, is the Maspeth school just going to absorb the overflow from Newtown and Grover Cleveland (2 schools facing closure) as the neighborhood feared all along?
Posted by Queens Crapper at 12:36 AM

Koslowitz = failure and a liar. She sold the Forest Hills community that the new high school was to be for students of Forest Hills, but Forest Hills represents a very small minority of students there.

The zoning lines for the Metro HS are drawn so that if EVERY student living in the zone applied, there would be a seat for them. Since many students did NOT apply this year, the school opened up to either Queens-wide or city-wide admissions (not sure which). The Maspeth HS, on the other hand, is going to give District 24 students priority in admissions, and therefore, will most likely fill with oly D24 students.

The proposed new school principal was introduced at the Jan. 25th District 24 CEC meeting. The school will NOT have a theme like Teaching, Medicine etc. This will be what the communtiy requested - a gen ed, college prep high school.

The community was told by SCA and DOE that the school would be themed because ALL new schools are. So if it's now a "general ed" school, that means they LIED, as usual. It's not going to be general ed because the community requested it. It's because the city is planning to close Cleveland and Newtown and they're going to dump those students at Maspeth. Being for benefit of District 24 does nothing for Maspeth except bring Corona's garbage to the 'hood.

The last comment is incorrect. I am a D24 parent and have been to most, if not all, of the meetings about the Maspeth HS. I am no cheerleader for the DOE, but in this case, they requested community input last spring and summer about what kind of high school we wanted here in D24 and it seems they have actually listened. Just because the DOE initially said they were planning one thing and now they're planning another does not mean they "lied" - in this case it means they were responsive to the expressed desires of the parents in the community. Btw, the SCA only builds schools, it doesn't determine whether or not they have a theme, so if someone from the SCA said anything about themes, they were speaking out of turn. When this school was originally proposed, the DOE was planning two 500-seat high schools, but the community was able to convince them that we wanted one 1,000 seat gen-ed high school (there will also be a small D75 school at the site).

Dennis Wolcott stated that it would be a themed high school open to all across the city, as all new high schools are. This makes it better because there is competition to get in, it was explained. The only concession was that District 24 students would get first dibs on the seats. The limit for schools is 500 students, because smaller is better, as per Wolcott/DOE. I remember all this as though it were yesterday. I also remember the DOE spending $16M for a contaminated piece of property that the owner was only asking $15M for.

If you want your kid to go to a large contaminated "general ed" high school with the general population that does not compete for seats, then so be it. I don't know anyone these days who would want that for their child.

Certainly sounds like they fed us a bag of shit. When that school opens, it will be a disaster for the neighborhood. You can't drive anywhere near PS58 now at dismissal time or ride the bus down Grand. I can't wait until the toxins from that building are spewed out into the air, too. Should make my property values go way up! The yet to be opened gas tank park is going to be hoodlum central.