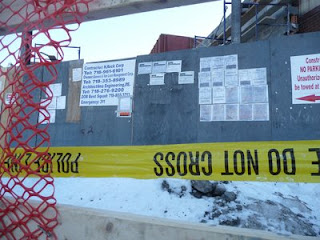 The Department of Buildings is preparing to crack down on developers with a history of violations like Tommy Huang, whose Elmhurst construction site was the scene of a worker's death last week.

Department of Buildings (DOB) spokesperson Tony Sclafani said the city was investigating the Elmhurst accident. “Our inspectors and engineers are continuing to work with law enforcement agencies in the ongoing investigation,” he said.

“Mr. Huang is a poster child for developers who engage in unscrupulous building practices on a repeated basis,” Avella said. “It is time that the city steps to the plate and institutes the regulations necessary to refuse the issuing of buildings permits to developers” with shoddy building records.

Currently, the city cannot deny a building permit based on a developer's previous history of violations. But under Local Law 8, passed in February of 2009, DOB is drafting a set of criteria that could be used to revoke a developer's registration number on the basis of past violations.

The City Council must approve the criteria, which would judge a developer's track record for safety before issuing new permits. Sclafani said DOB would present it to the council “later this year.”
Posted by Queens Crapper at 12:29 AM

"The City Council must approve the criteria"


Translation: The City council bribe has to be sufficient.

"The City Council must approve the criteria"

It's unclear to me... what prevents a developer from creating a dummy corporation to do the development?

By the way, it is all public record.

They actually form real NYS coporations. All of this is public record and can be accessed on the NYS website.

You don't get to see any of the corporate documents though. The NYS State Attorney General can take a peek at them and hopefully that may prompt an indept investigation. Then, there are those condo and homeowner associations documents required to be filed with the State for projects. Remember, they cannot be a part of condo offerings or homeowners' associations. Hence, everything is in another family member's name.

New Main Street & 41st Road was the G.C. and 63 Drive Corp. was the initial owner of the Bayside project. Both corporations are now inactive - dissolution by proclamation - annulment of authority. Are there outstanding taxes due?

According to the NYC Dept of Finance website: it appears that they still own properties. Can inactive corporations transfer properties down the line? Is it legal? What about Capital Gains taxes!

Presently, Mia & 223rd Management Corp. owns the Bayside property. It was newly formed to transfer the property over to.

What does the NYC Dept. of Finance records show: No transfer taxes paid. Hm! But 63rd Drive Corp. probably paid $1.2 million for the property. Maybe they spent another million building those pieces of Queens Crap. Were there capital gains?

Transfers of one piece of property over and over again amongst related companies, especially in short periods of time, raises questions.

Then you have H Rock, who is the G.C. at the Queens Blvd. site and also is the G.C. at the Bayside site. They didn't have liability insurance at the Bayside site. It is hard to imagine that a developer would be so brazen as to begin excavating on a complex, one lot development with four houses, four garages and an access road and not have liability insurance.

Now if you go to the DOB Website for either project and you pull up the filings, you will see a pattern in the filings of having different owners listed. Clearly, the DOB does not pay attention the contents of those filings. Oh right, they are usually self-certified by the architects and engineers working on the project. So, the information on the forms is presumed to be accurate. Or, is it that they just keeping making those same old stupid mistakes over and over gain.

uh, Local Law 8 was passed WHEN? and criteria for implementation being devekoped NOW? and didn't Sclafani says the DOB couldn't fo a thing? The DOB has an incredibly flexible definition of reality... guess that's why an MBA (v. architect or engineer) is needed to run the Agency - they know how to do that alternate reality thing well - look at wall street!

This Guy and his family have been dumping crap on empty lots they own and the city does shit to stop him. I say deport the entire bunch and retake our land!

Good job! DOI should hire you to do the investigation!