Fire in illegal conversion in Jamaica 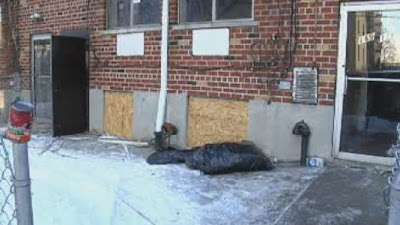 Twelve people were taken to the hospital Sunday after an early morning house fire in Queens.

It took firefighters about an hour to bring the flames under control.

The New York City Fire Department says seven people in the house were hurt, including one person who suffered severe burns.

One was taken to Cornell Medical Center with burns to the face.

The cause of the fire is under investigation, but investigators do not suspect foul play.

The fire started in the basement, where the building’s super lives, and caused heavy smoke throughout the building, officials said.

“When we pulled up, we had heavy smoke in the street. People out on the balconies, we had heavy fire condition in the basement,” Clark said.

Witness Pedro Pagon said firefighters rescued people from balconies with portable ladders and others rushed to the basement to rescue the super.

“The super lives in the basement and he was burned. His shoulders were also burned. They were screaming,” he said.

The super, who was in critical condition at a Manhattan hospital, lived in the basement with his family, tenants said.

And the drum beats on...I predict no one will mention this in their news reports.
Posted by Queens Crapper at 11:21 AM

I'm familiar with the building and the super, as I used to live there several years back. There is a storage cellar in the basement of the building, as I've seen it myself. To my knowledge, there's never been doctor's offices in the building. What a sad (and odd) situation.

Same shit, different day, landlords don't care, neighbors don't care and neither the DOB, nor the mayor gives a shit how many are injured or dead because of greed.

I'm sad & angry about this poor innocent man's death. I lived in an illegal unit in Brooklyn back in my youth, the difference was we bought battery operated smoke detectors. Why didn't they have them? Long live Israel! Death to the Palestinians! End welfare! Big Hairy Balls is BACK! Watch out welfare losers!

looks just like a building in Woodside on 62nd Street off 38th Avenue that constantly has fires. everything is electric, including heat that the tenants have to pay for.

Find some road runners and turn them loose. The coyotes will kill themselves chasing them.

The landlord of the building is very greedy. Instead of repairing the majors instead of just the minors in his rodent infested building in Queens that effect peoples lives(his tenants). He builds his family a mansion while his tenants go up in flames. What a shame.