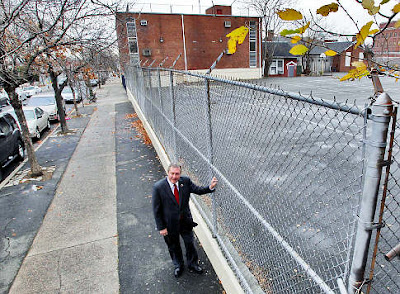 The city has low-balled itself out of the running to buy a rare half-acre parcel of open space in Jackson Heights that could have expanded a popular park, the Daily News has learned.

The cash-strapped Garden School was in talks to sell its yard to expand nearby Travers Park. But the school's board of trustees voted down the city's offer at a meeting last week, fearing a lengthy city acquisition process, officials said.

The decision paves the way for developers to move in.

Michael Rakosi, vice president of the 87-year-old private school's board of trustees, said the city was always Garden's first choice. But the cash-strapped school can't afford to wait for the city's check to clear.

"If the city would come with a check today, we would sell today to the city," he said. But "it would be a year or 18 months before we'd get any money [from the city] - if we can get any money."

The nursery-through-12th-grade school is in tough financial straits after enrollment dropped, he said. It needs the money immediately to pay off loans and stay open, he said.

But it could take up to two years for the city to acquire the property, said Parks Department spokeswoman Trish Bertuccio.

Rakosi said the city's bid was about 15% less than offers from four developers interested in putting residential projects on the site - and there was no guarantee a city deal would go through. No contracts have been signed.

It's interesting how this city moves mountains to acquire property when it benefits developers but when communities need open space they play the old game of "oh well, we tried our best." If the city can rip land out from under unwilling sellers and pay legal costs for years when they take them to court, then the city can pay a little more to acquire property from a willing seller for a public purpose. If we didn't have a billionaire despot in charge, that's what would happen.
Posted by Queens Crapper at 12:32 AM

No, the problem is not the despot, for he is a creation of city council.

There are no middlemen, lobbyists, publicists, political operatives, or "expiditers" to push through the city's crap contracting processes. Naturally it's going to take years.

Now if this were only a mosque and not a city park we were talking about...

Death to Israel ,death to Palestinians and death to the guy with the incredible NYC so called teacher's pension .

The city council should be eliminated!!! they do nothing & clog the system! with their fat pensions & benefits most make 100k plus a year for what?!?! also eliminate the other wasteful positions like comptroller whatever that John Liu is a fool so over these bloated politicians, gass them all!

Anon 3: It's a pension, a great one. I earned it for 25 years of teaching math to your retarded children. You probably work in a low paying job without a future so you just jealous. As anon 2 said, yes I agree with you if it were a Mosque they build it in a second. Throw them out! Long live Israel! Death to the Palestianians! Take away Anon #'s food stamps today. Big Hairy Balls USAF combat vet, Viet Nam.