Interesting. I figured the criticism couldn't last long. So how exactly has Bloomberg "made up for" the shitty response in December? Has he brought the dead back to life? 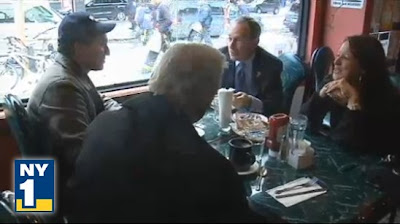 Ah, a post-cleanup photo op at an Astoria diner with Council Member Peter Vallone, Bloomberg's sharpest critic during the aftermath of the December 26th storm. I can't believe after all that ranting and raving that the Public Safety Chair would suddenly embrace the mayor for being able to handle an 8-inch snowfall. 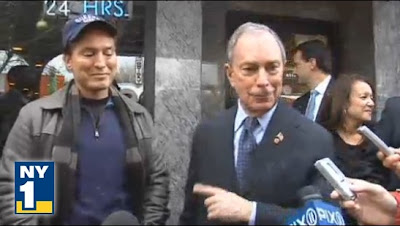 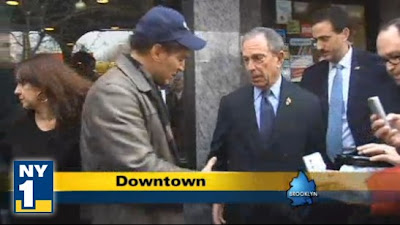 It would be nice if NY1 at least knew what borough they were promoting the mayor from.
Posted by Queens Crapper at 10:02 AM

Labels: Astoria, Bloomberg, Daily News, How not to publish a newspaper, Peter Vallone

Why are we surprised? He voted with him to extend term limits against the wishes of the people. He wants his money, and support for his next big run.

CAREER politicians, you vote em in, you keep em going.

Snow removal in the Bayside/Whitestone area was STILL NOT ACCEPTABLE. After I discovered that schools were open, I looked out my window to the sparkling unplowed virgin snow on our street. I called 311, was on hold for 10 minutes, and then gave up and called Councilman Halloran's office a few minutes past 9. Finally, too late for anyone to get out, at 9:30 AM, a plow came through. According to people I know in Whitestone, some streets were not plowed until around 12 noon. How is this a "better job"?

Anon 3, first one there really wasn't that much snow to plow.
9:30am isn't that late, same thing
with noon. When did it stop snowing?
7 or 8am?

This is what is meant by ASS KISSING. BIG TIME !

I cant really comprehend the hold he has on people. I dont know if he hypnotizes them, or injects some form of control into them, sort of like minions...

The truth remains that this guy can do no wrong and despite his hipocrisy and everyone bashing him for his terrible job from the previous snow storm everything is back to business as usual and he has done a miraculous job in cleaning this minimal amount of snow...

Oh yes there was "that much snow to plow", Anon #4. What do you call a foot of snow, a dusting? We couldn't dig out our cars until at least one pass with a plow.

Somebody told me that the Mayor did not want to comment on the Huang matter?

Since when is he at a loss for words?

But who's the woman sitting on the table in photo 1? On the right in photo 2 and on the left in photo 3?

20 minutes from Mike's Diner on Ditmars, the Mayor could have seen the historical Steinway Mansion that Mike Halberian spent his life savings trying to restore, and his NYC book collection. Mike Halberian passed away on December 27, 2010.

His wish was to make it into a museum.

Mike Halberian will always be with us in spirit. Peace in snow.

His wish was to make it into a museum. Please preserve the historical Steinway Mansion.

Sure, thats why he put the Vallones in charge.

Ironic the the Vallones backed the mayor whose policies indirectly led to the botched snow job which directly led (some believe) to the late medical response which caused Halberian's death while the Vallones (due to the insular dynamics of Astoria) are in the catbird's seat on the fate of the Steinway Mansion.

In my neck of the woods, performance in 1st storm was abysmally poor, 2nd storm, reasonably acceptable but far from good. All the praise for getting the job done the second time is like praising a 12 year old for getting a shoe tied. A feat for a 3 year old, just something expected of the 12 yr old.