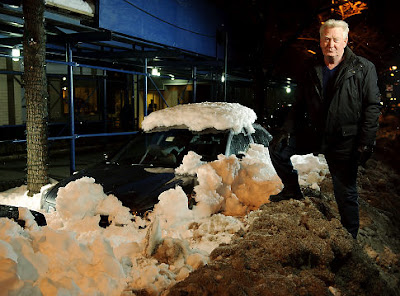 A Manhattan man's car parked across the street from Gracie Mansion was buried under several feet of snow by Sanitation workers clearing parking spaces for Mayor Bloomberg's staff.

John Connolly, 63, a veteran magazine reporter and ex-NYPD cop, said he stepped outside to clean his vehicle on East End Ave. a day after Wednesday's snowstorm dumped 19 inches on the city.

But instead, he found an army of trucks from the city's Department of Sanitation pushing snow to the side of the street where he parked his 2010 Honda Accord.

"They scooped up the snow from where the mayor's people park and they pushed it to the other side of the street," Connolly told the Daily News yesterday. "I care because my car is buried under that snow."

A Sanitation supervisor told him that a crew would be back to plow around Connolly's gray sedan, which was packed in a mound of snow more than 4-feet wide and nearly 5-feet high.

When no one returned, Connolly said he offered a few men some cash to help dig the car out. The men refused, saying it was too much work.

Hmmm, I thought the green mayor's staff took mass transit or rode bikes everywhere. This is truly puzzling.
Posted by Queens Crapper at 7:07 AM

DOS should have buried Bloomberg under a mountain of snow....or maybe shit!

Bloomberg's government has nothing to do with representative democracy where you have to deal with people. Bloomberg city government is a monarchy and he's "king". Too bad he acts like a gaping asshole.

Tell that's troll to get out there and clean this mans car. Sanitation has some set of balls to do that.

He's just lucky they didn't cave in the side of his car while they were at it. Sieg Heil!

Doubt the king is even aware of this..

This action could have damaged this guy's car. At least he has this documented and could move to sue the city for damages or neglect of public property.