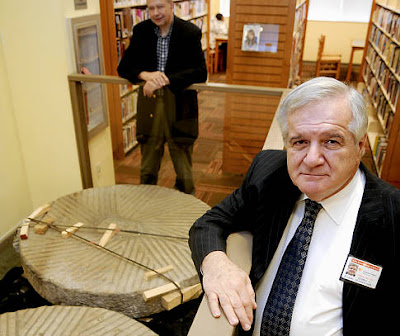 A pair of millstones long embedded in a Long Island City sidewalk may soon grind their way into primetime.

An Astoria historian is in talks with the PBS show "History Detectives" to reveal the origins of the artifacts, whose removal from Queens Plaza last year sparked spats about their future.

"How can people ultimately decide their fate if we don't have all the information in front of us?" asked Bob Singleton of the Greater Astoria Historical Society.

An associate producer for the show - in which experts research historic objects - said she wants to work with Singleton but is waiting for more details on the 10-inch-thick millstones.

Once part of a 1657 grist mill in Dutch Kills, the millstones are believed to have been cemented into the sidewalk in the 1920s. They were disinterred last year during construction on Queens Plaza.

Debates soon raged between civic leaders who want the stones on outdoor view and others who believe they belong in a museum, protected from the elements.

The objects are now on display at the Queens Library's 21st St. branch in Long Isalnd City, where they are slated to stay until spring 2012. The city then plans to re-embed them into the sidewalk or put them on a pedestal nearby.

At the heart of the argument is whether the aging millstones can withstand harsh weather - or if putting them indoors would limit public access too much.

Singleton hopes the PBS show could determine whether the millstones were made in the Catskills, as master miller Ted Hazen told the Daily News.

That's an interesting way to display historical objects. I'm sure City Planning and EDC will do an even more stellar job when they are dumped in the middle of Queens Plaza.
Posted by Queens Crapper at 12:55 AM

They would cared for as a daVinci if they were found in Manhattan, no?

I remember with fascination the day my pop first pointed the millstone in Queens Plaza out to me when I was a teen.

Now, my pop is gone, and I am an aging woman, but the millstones are still around. They join a very similar one sunk in the ground outside the Grist Mill in the New York Botanical Gardens.