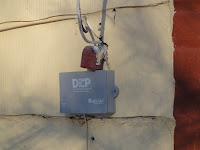 First it was the EZ-Pass, then the local gas pump. Now radio frequency identification technology is being used by water meter readers throughout northeastern Queens, eliminating the need for home visits by city employees.

But many area residents like Eliott Socci of Douglaston are reporting higher water bills — in some cases, triple that of previous pay periods — which they believe is the result of a recent switchover from traditional to electronic water usage meters.

"I’m telling people to save their bills. Unless this is their way of paying for meters they just put in, it’s not logical," Socci said, who said he first took notice of a spike in his residence's water usage in early October.

Socci claimed that he was billed twice during the period spanning October into November, speculating that The Water Board failed to "close off" his old meter while simultaneously charging him based on usage from its electronic equivalent.

"Newly installed wireless water meter readers do not cause duplicate reads, they simply transmit accurate data ... so that it can be viewed online instead of having to send workers to visually obtain a meter read in person," said a spokesman for the city Department of Environment Protection in response to Socci's allegation of over-billing.

However, Assemblyman David Weprin (D-Little Neck), slammed the DEP's practice of considering complaints on a case-by-case basis, instead calling for public hearings on reports of ballooning water bills throughout the city.
Posted by Queens Crapper at 12:21 AM

DUH no shit! I knew this kind of crap was going to happen. That's why I still haven't had it done!!!

Getting double billed is a clerical error, not the fault of the electronic device. The electronic device just transmits the numbers it reads off the the water meter in your basement. If they installed a new water meter in your basemant and your bill went up, the most likely cause is that the pistions in the old meter were worn, and water was leaking by with out getting counted. So that means now you are paying what you should be paying, like the rest of us....

And we are surprised because? This was planned all along. Fleece the taxpayer. How much did it cost to replace every water meter? Money that didn't have to be spent. There was nothing wrong with the old meters. Just another way to scam us.

A brand new manually read water meter was installed by the DEP in the summer of 2008. There were two people living here at that time and for the next 18 months.

A brand new electronically read meter was installed by the DEP in April of 2010. Since that time, my water bills have doubled despite only one person living at the same address. Yes, that's right, as soon as the DEP began taking readings from the electronic meter, my supposed water usage DOUBLED from when two people were living here and the meter was read manually.

Pistons schmistons. I've complained to the DEP and even they admit that it sounds high but said they won't do anything.

Who should I call to light a fire under the DEP's butt?

Knew this would happen. Not surprised at all.

They better fix the problem and fix it fast -_-

David & Mark Weprin don't seem to be motivated to do anything!!! Except promise to fight for us at election time (crap) David W blames the mayor (what's new). I so mad I'm ready to take to the streets!!!!!!

Who should I call to light a fire under the DEP's butt?

Let me get this straight, your bill was $70 every three months, while watering your lawn?
How long and how often did you water it?

I called the city to report that I was being charged for water usage for weeks when I was not home,from the new meter readers. They sent some one out to check out my meter, and all I got was a fine because I had a toilet float to high. and a toilet with a leak when it was on, but it has not been on for years.They never answered why I had reading when I was not home. Every day the reading was for the same usage,which I claimed was in possible.No matter what I claimed, they said the new reader were accurate. What a load of crap.

I come to Queens Crap for grammar lessons!

Me three! Zee you zoon, Ahnold.

Let's see, you walk into your house anytime day or night, turn on a faucet and presto - clean drinkable and decent tasting water comes out of the tap. You run to the john and use the facility fully and push a little handle and it all goes away.

Go back 200 yrs when there was no government requiring clean water and decent sanitation for residents of this city. What do you think the above actions would be like?

Move out of NYC and see what you get as amenities. Jersey water smells like rotten eggs most of the time, tastes like water that is full of metals (because it really is), and a well is not cheap to dig and when it runs dry or is infiltrated and contaminated by leaching effluent from what does not go down a toilet ---- see how much you like it then. Where would you dump it? On your neighbors lawn?

Go check the water bills in California, Arizona, Florida, and see what they pay! All those lovely green lawns in Douglaston, Jamaica Estates and Forest Hills would be brown if you paid what they pay.

Stop whining and wise-up, don't let your lawncare guy set up your sprinklers. Lawns do better NOT being watered every day or even every other day. Set up 3, 4 or 5 days apart for a little longer. Use your dishwasher, it uses far less then you think. Fix your hissing toilet....you are wasting water and YOU will pay for it.

Very good info provided in the article, thanks for sharing
Also do checkout Water Meters by Watflux deals with the measurement of domestic and commercial water consumption .