Crowley in the clear 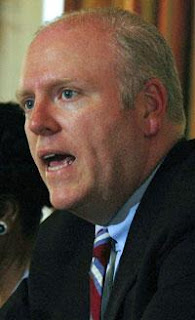 WASHINGTON -- The House ethics committee has found no connection between fund-raising by Rep. Joe Crowley of New York City and his vote on a financial overhaul bill.

The committee dismissed cases against Crowley (D-Bronx, Queens) and six other lawmakers after finding no evidence that they appeared to give donors special treatment or access, or that contributions were linked to official actions.

The independent Office of Government Ethics, which recommends cases for further review, had asked for the ethics committee to investigate Crowley and Republican Reps. John Campbell of California and Tom Price of Georgia.
Posted by Queens Crapper at 12:47 AM

The ethics committee has no ethics of its own....so how can they clear Crowley?

If the king of clubhouse racketeers, "Gory" (blood on his hands) Ackerman, went up before the house ethics committee, they would clear that gross crook too!

We won't have democracy in America until it's citizens wise up to those corrupt pols they've elected to represent them.

Can what's happening in Egypt spread to the U.S.? Not to worry. Kids have their iphones and are texting each other. Why pay attention to the real world?

Queens County Democratic Chairman Thomas Manton: Joe, m'boy. Here's what we're gonna do. I'll announce my retirement from the U.S. Congress after the primary cut-off date. That'll screw McCaffrey and Sabini. I'll then announce that you'll take my place. No silly thing like letting the voters decide. How's that sound?

Joe Crowley: Sounds great to me, Chief. Can I get off of my knees now?

Hey Crappy, you should post the New York Times article. Here's what they write about Joe Crowley:

Mr. Crowley’s fund-raising consultant, for example,
invited executives or lobbyists from General Electric, UBS, Morgan Stanley, New York Life, American Express, Ernst & Young, Hartford Associates and Zurich — all companies registered to lobby on the financial regulation bill — for two fund-raising events that took place on the same night that the House would vote on key amendments to the bill. Representatives from several of these companies ended up attending.

Tammany Hall style political representation is not what his constituents want or need and want him to focus on citizen issues rather than making citizens of illegal migrant laborers.

Thats why the clubhouse hacks get elected in a Roman triumph every time.

Crowley is, indeed, the king of corrupt clubhouse politics.

But if you want to see government "at work" Queens style (LOL) you should have attended State Senator Tony Avella's inauguration at Queensboro College yesterday.

The Ackerman/Tribune's whore ad prince (Manes's close friend), Michael Nussbaum himself, sat two rows in front of me. The glare off his balding pate interfered with me photo-documenting the proceedings.

Surprise...smarmy Chuck Schumer oiled his way up to the podium and spouted slick nonsense peppered by the usual political accolades one can expect to hear at such events.

Councilman Dromm took the opportunity to pimp for his usual one issue platform "homo" rights. Put on a little weight haven't you Danny boy feeding off the public trough? You know that you have "straight" constituents too C.M. What do you do but cruise past their issues?

Yawn...I should have left before Tony spoke...but Tony's a great guy trying to do the decent thing among Albany's rattlesnakes. I was there for him. Bravo dragon slayer Avella!

You'll be needing it with those Albany rattlesnakes. Especially with that Stavisky gang behind your back...forever trying to prod and bend you to their will at every turn.

Now let's get back to Crowley.

With his well armed political machine out there night and day...I fear that Queens is doomed!

But how fitting for a 4th rate borough...peopled by the cream of mediocrity.

How can we expect good government when the bulk of Queens voters are idiots?

"But how fitting for a 4th rate borough...peopled by the cream of mediocrity.
How can we expect good government when the bulk of Queens voters are idiots?"

Case in point, Council District #30 elected Elizabeth Crowley, she is Joe's incompetent and verbally challenged cousin. Those neighborhoods are in deep trouble.

Queens is soaked in corruption. I do not believe we are idiots, as Anonymous puts forth, but I do agree we are in deep trouble.

But if you want to see government "at work" Queens style (LOL) you should have attended State Senator Tony Avella's inauguration at Queensboro College yesterday.

oh crappy, do post - we all want to see the fun! tody toby's sitting posture, the glittering entertainment, the entire tiresome evening!