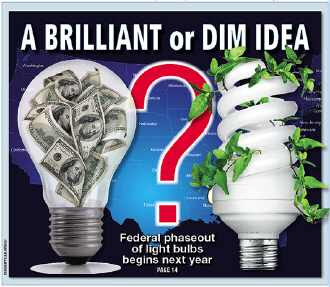 NRG Energy Inc. will build the generator on the site of its existing plant, which is within the 600-acre Con Ed property on the northern edge of Astoria.

NRG will shut down its existing generators on the site, which were installed in 1969 and put out 600 megawatts of power.

In their place, the company will install a new generator capable of churning out 1,040 megawatts.

Although the new $1.4 billion plant will be much bigger, every year it will put out just 12 percent of the pollution of the existing plant, NRG says.

The first phase of the new plant will come on line in 2013, and the entire project will be finished by 2015.

On top of this, you can start to kiss your incandescent bulbs goodbye.
Posted by Queens Crapper at 12:31 AM

The real question here is the overall efficiency and what effect this new construction will have on rates.

The linked article has several inaccuracies:

CFL's are LESS expensive if you buy them at a discounter such as Home Depot. I have dozens purchased there for around $6 for a pack of four 13W (60W equiv) The 100W equiv are the same $6 but for two lamps

Standard incan's are more expensive if bought at typical grocery or convenience stores.

You can find cheap incan's at places such as Big D on 14th st but I have also bought a card of ten 13W CFL there for $10 and were made by the manufacturer as those sold a Home Depot.

Typically they last 4-5 years. CFL lamps use a miniature Switch-mode power supply and do introduce interference (might interfere with your listening to wabc) and, it's best to minimize the amount of off/on cycles to prolong the lamps (typical of all fluorescent lights.

CFL's are best used in lamps that are "on" for lengthy periods and standard tungsten lamps for frequently switched app's such as bathrooms.

The article mentions LED's as a future replacement but if you are consider them for general lighting, you'll be using the "White" version. In my experience white LEDs have poor lumen maintenance and their color temp is just too blue for comfortable use at home.

The colored varieties are good for accent lighting.

It takes care of the whole house at thginht even if its been a cloudy day. However I had to make everything including etching my own PC boards to make the light modules. (to keep cost under control)
Those modules (2-3 LEDs each with a 7805 regulator IC depending on the room) these modules then get hardwired on to the lighting fixtures. The battery, regulator and blocking rectifiers are in a closet.

The new Samsung and Sino LEDs blow away anythin that was available last year.
White LEDs were only 5000K (Kelvan)at first but the blue issue has been corrected.
You can get them 3500K “warmer” yellow-tinged shades, to 4300 "White" 4600 "Daylight" and higher. At around 5000K it becomes cold light with a bluish tint.

Just like CFLs you have to be really careful with the labeling on the packages. Some packaging provides the actual color temperature, in which case it is best to go with 3500 – 4000 K. (warm incandescent white)
Often they are labeled simply “warm white” which will approximate the yellowish glow of an incandescent light.
With LED's if you see “cool white”, they could be florescent white OR the older bad bluish harsh and unnatural white distributers need to unload.

I've got some cree led lights,nice white light,a little whiter than a halogen.Also,if you use cfl's ,when you install the bulb,leave it on for at least a half hour.They need to "break in" to get maximum light output &service life.

If you accidentally break a CFL bulb

Before cleanup
Have people and pets leave the room, and avoid the breakage area on the way out.
Open a window or door to the outdoors and leave the room for 5-10 minutes.
Shut off the central forced-air heating or air conditioning system.
Collect materials you will need to clean up the broken bulb: Stiff paper or cardboard, sticky tape such as duct tape, damp paper towels or disposable wet wipes, glass jar with a metal lid, such as a canning jar or a sealable plastic bag.

Cleanup steps for hard surfaces
Carefully scoop up glass fragments and powder using stiff paper or cardboard and place debris and paper/cardboard in a glass jar with a metal lid. If a glass jar is not available, use a sealable plastic bag.(Note: Since a plastic bag will not prevent the mercury vapor from escaping, remove the plastic bag(s) from the home after cleanup.)
Use sticky tape to pick up any remaining small glass fragments and powder.Place the used tape in the glass jar or plastic bag.
Wipe the area clean with damp paper towels or disposable wipes. Place the towels in the glass jar or plastic bag.
Vacuuming of hard surfaces during cleanup is not recommended unless broken glass remains after all other cleanup steps have been taken. Note: It is possible that vacuuming could spread mercury-containing powder or mercury vapor, although available information on this problem is limited.If vacuuming is needed, keep the following tips in mind:
Keep a window or door to the outdoors open;
Vacuum the area where the bulb was broken using the vacuum hose, if available; and
Remove the vacuum bag (or empty and wipe the canister) and seal the bag/vacuum debris, and any materials used to clean the vacuum, in a plastic bag.
Promptly place all bulb debris and cleanup materials, including vacuum cleaner bags, outdoors in a trash container or protected area until materials can be disposed of properly.
Check with your local or state government about disposal requirements in your area. Some states and communities require fluorescent bulbs (broken or unbroken) be taken to a local recycling center.
Wash your hands with soap and water after disposing of the jars or plastic bags containing debris and cleanup materials.
Continue to air out the room where the bulb was broken and leave the H&AC system shut off, as practical, for several hours.

CFL bulbs are great in areas that are difficult to change or perform general lighting. I use them in all hallways and even my outside light. I compensate for a lower level of lighting by buying higher-output = wattage. This works especially well outside or in kitchen fixtures. The bulb need to warm up a bit out side - but once on I can leave them on all night without incurring the energy cost of traditional bulbs. These bulb are also significantly cooler and are ideal to be used in closet lighting fitures. The difficulty using this type lighting is in living areas and for reading. To avoid that "Chinese takeout store lighting" I again use higher output bulbs that are whiter tone and shade them - this seems to work well in shades that are cream colored - try a few at the store to get a sense of what your looking for. I also but these bulbs in 6 packs at Walmart where they have a vast selection by different manufacturers. Walmart already is selling LED lighting that will probably replace CFLS in the next few years. They are even more efficent and have greater candlepower and last forever!

This is a good thing, plus can save some money too.

Replaced a hallway light with a CFL last month.

POS takes 30 seconds to get to full power (at which point i no longer need to be in that room) and is as ugly as can be.


The next week, I made the "investment" and got an LED to replace it next week. I am much happier with it. Good color, instant-on.

If the price comes down on LEDs, i wont miss Incandescents. However, CFLs are not the solution.

How is another power plant a good thing for the people in Astoria? We already suffer with the highest asthma rates compared to the rest of the city. Sure this plant may pollute less but this is evidence that Astoria will always be a dumping ground. I also thought the Vallone's had touted how they will protect Astoria from any more plant construction. I guess that conflicts with Vallone senior's role as lobbyist for some energy companies.

On another note if you believe this plant will help power homes in the city or alleviate the power grid , I have a bridge to sell you. That is the lies they told a few years ago when they built that plant under the Queensboro bridge. This company will sell the electricity out of state while taking advantage of the resources in New York.

Best way to save energy and the environment: stop flying to Bermuda every weekend.

As a population increases the need for power increases. The SF area has experienced "rolling" blackouts thanks to idiot environmentalists who didn't allow construction of any new power plants. Given my lifestyle I'll take the power over the blackout anytime. In regards to CFL's they are great! The outdoor CFL's at my home are still burning after 6 years! Long live Israel! Death to the Palestinians! Long live my INCREDIBLE NYC teacher's pension. END WELFARE NOW!

I've yet to see one of these new lights compare to the old.

My wife broke one. I made her leave the apartment while I figured out what to do. Went to the EPA website figure out what to do. Followed their recommendations. Only to find out the worst exposure comes in the first few minutes of the breakage. Oh well we have been exposed.

Handling these new light bulbs makes me feel like I am handling nuclear waste. THIS is helping the environment?

ANd what the hell are the elderly or the handicapped going to do when a light bulb breaks?