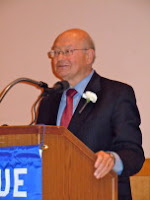 U.S. Rep. Gary Ackerman, D-Bayside, is calling on the federal government to build a hospital for veterans in Queens, rather than redevelop the property at an existing extended care facility in the borough.

The congressman is urging the U.S. Department of Veterans Affairs to create a new full-service hospital at the site of the St. Albans Primary and Extended Care Center.

“I am concerned that the current St. Albans plan would be inadequate for the burgeoning needs of returning Afghanistan and Iraq veterans,” the congressman wrote in a letter to Eric Shinseki, the U.S. secretary for Veterans Affairs.

Ackerman said he believed the VA’s “Enhanced Use Lease” plan, which would modernize the current hospital in St. Albans by leasing 25 acres of the site for private development, could be inadequate for local veterans.
Posted by Queens Crapper at 12:50 AM

how about just a HOSPITAL????

Did he ever serve? where was he during the Nam war?

Anon # 3 yes it does, for more reasons than you know

Who dos he have in mind to develop the 25 acres? His asshole buddy, Tommy Huang?

Anon No. 4: Please explain. Does a lack of military service disqualify from acting to benefit our veterans?

why? is he going to join the U.S.Army?

Ackerman's "service" in the U.S. Armed Forces consisted of his being named an "honorary graduate" of the U.S. Merchant Marine Academy.

The Taxpaying Citizens of St. Albans and Cambria Heights want the VA Hospital to stay where it is and to repel the "private developers". The People have spoken and who is he to deny them?

Anybody that does some good for our vets is alright in my eyes.

Anybody that wants to renovate the St. Albans facility is ALSO alright in my eyes.

Stop your whining. You haven't a clue what out vets really need.

Ackerman graduated Queens College in June 1967, having been student body president and already taking junkets on student organization money. Having a student draft deferment was what was done. Ackerman did nothing wrong not serving; he took advantage of the student draft deferment along with many guys who are now 60-something. We need a HOSPITAL in Queens. Another VA hospital is another good idea, since we have more vets coming back with severe physical and emotional problems from Afghanistan and Iraq.

How about a hospital that serves all people, not just warriors? I mean I know they're heroes, but civilians get sick and injured too.

i resent a man who works to free a convicted spy against America,jonathan pollard, attempting to gain favor with U.S.military veterans. his actions are hypocritical.

he also voted for obamacare,which will cut $500,billion dollars in benefits from medicare for senior citizens ,in 2014. many who served with honor in the U.S.military.

His "student deferment" would have ended when he graduated in '67. So how did he evade the draft afterward?

Then let's see someone else step up to bat and do the same thing. I don't see anyone else rushing to do it.

After graduating Queens College, Ackerman became a public school teacher. Would that have qualified him for another deferment?

Based on the laws at that time, yes.

The vets are treated horrible in VA hospitals beacause of lack of facilities. Good MOVE CONGRESSMAN

vets do not get treated "horribly" at VA hospitals. all facilities are not 100%,but neither are the city and private, medical facilities.

my experience with the VA has only been positive. my vet pals with combat disabilities,who have used the VA since the Korean war truce,have never complained about their treatment there.

do you ever read of the government representatives who use Bethesda Medical Center complain?

what is the congressman from St.Albans doing about the hospital facility in his district? is he the one who is close to indictment? what is his name?

i use the Northport and Plainview facilities,for outpatient service. they have been excellent for 15 years,for me.

but i still depend on medicare and 20% Blue Cross/Blue Shield,which i pay for monthly with social security benefits ,that i earned through my employment life.

my wife has an excellent senior citizen's MEDICARE MEDICAL ADVANTAGE program with reduced RX costs, but in 2010 ACKERMAN AND THE DEMOCRATS VOTED TO ELIMINATE IT..... for 11 million seniors. this takes place in 2014, unless the Supreme Court rules that obamcare is unconstitutional. government can not FORCE a citizen to purchase any product.

All of what you wrote is irrelevant to the original post.

When has that stopped anyone before?

the MASTERS OF DECEIT can not stand facts.