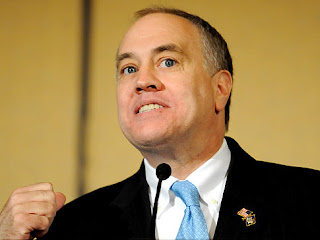 Comptroller Tom DiNapoli is proposing legislation that would strip public officials of their pension benefits if they are convicted of a felony.

DiNapoli’s bill also imposes a penalty of up to twice the amount of money a public official garnered as a result of a crime committed while in office and elevates Official Misconduct to a felony – which, in the case of the Senate and Assembly, would also result in the loss of one’s seat.

The state constitution does not allow retirement benefits of sitting public officials to be reduced, but they would be subject to the penalty of up to twice the amount they benefited from their crime.

Sounds like we need a change in the state constitution.
Posted by Queens Crapper at 12:08 AM

Still not enough of a penalty but it's a start.

This bill could help quell some of the crimes these Pols commit in office.

how many queens democrat politicians and their families collect pensions via supposed service at QUEENS COLLEGE ?

btw: has a. hevesi served a day in prison?

Just Hevesi. Do you know of any others?

File this legislation under "duh"!

How about some additional legislation to rein in the control the big money lobbyists/consultants and special interests have on our legislature? Maybe legislation for public financing of elections so lobbyists can't buy elections and then own politicians?

Is there a list anywhere of how much our pols are collecting in pensions? Isn't this public information. If Bloomie is so exercised about pensions let's see some stats on politicians who are collecting. Let's start with Koch.

Is there a list anywhere of how much our pols are collecting in pensions? Isn't this public information. If Bloomie is so exercised about pensions let's see some stats on politicians who are collecting. Let's start with Koch.