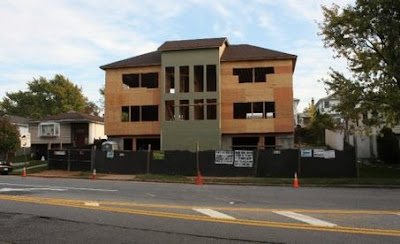 The City Council yesterday gave a break to Staten Islanders who are tired of oversized, out-of-character, parking-spot-stealing medical offices and day care centers sprouting up in their neighborhoods.

The Council approved new rules yesterday aimed at curbing the building of those facilities in residentially zoned areas here, and encouraging them to be built in commercial zones instead.

The legislation, which grew out of discussions between lawmakers, the Department of City Planning, Borough President James P. Molinaro and the Growth Management Task Force, passed the Council by a vote of 48-0.

All three of the Island's Council members, including Councilwoman Debi Rose (D-North Shore), voted in favor.

The measure unanimously passed the Land Use Committee earlier in the day.

Borough officials and residents have complained for years that the facilities, often added onto existing homes, are frequently expanded to the point that they dwarf and loom over the surrounding houses, destroying the character of neighborhoods.

Because the medical offices and day care centers were not required to provide on-site parking, visitors and employees often took up precious parking spots on surrounding streets, much to the chagrin of local residents.

There have also been safety concerns about children being dropped off and picked up in the street front of the day care centers.

Under the new regulations, new medical facilities in residential areas would be required to be on lots no smaller than 5,700 square feet. On-site parking must be provided, and owners will not be permitted to seek to have the parking requirement waived.

Day care centers would not be permitted on lots smaller than 10,000 square feet. Officials have said that this will cut down on the building of centers because lots of that size are scarce in residential neighborhoods.

Day care centers would also have to provide on-site parking for employees, and an on-site drop-off point for children.

I find it implausible that this is only a problem in Staten Island and not throughout the City.
Posted by Queens Crapper at 12:12 AM

the same day care limitations should have applied to the center being built at 196-29 42 avenue in auburndale/bayside. the city planning commission approved this project even though the local community board # 11 voted against it ?
campaign contributions are listed for cm John liu and cm koo ,by the owner wayne shu of yee kom daycare center in flushing,queens.
there also is no drop off or pickup space for the children and no parking on site .
it is located across the avenue from P.S,130 ,an elementary school.250 to 300 children will utilize the four story building,with two floors below ground level.

Q.C highlighted this crap building on a mapped street, previously.....