This morning, Mayor Bloomberg declared a "weather emergency" after 19 inches of snow fell in NYC. He stated, "Clearing the streets remains our number one job - and to do that, motorists should please, please refrain from driving." 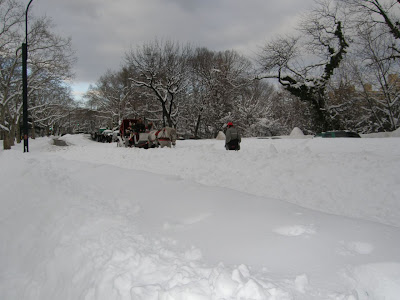 So when I received Elizabeth Forel's email (see below) stating that carriage drivers were out on the streets, I wondered how the ASPCA could have possibly allowed them to leave their buildings this morning, given the Mayor's announcement, the dangerous conditions, and the law, which clearly states that horses should not be working under these conditions. 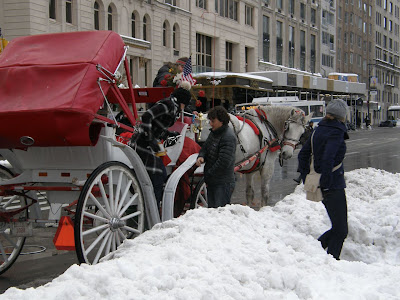 At 3:45 p.m., I went up to 59th St. As soon as I emerged from the subway, I saw a carriage driver unloading one group of tourists from his carriage and reloading it with another. I also saw the water trough in Grand Army Plaza buried under snow. 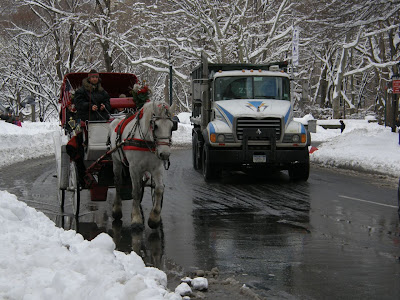 I called the ASPCA and asked if the carriage drivers were allowed to be working today. The agent assured me that they were not. I informed her that I was standing right next to one. She said that she would send an officer.

In spite of five solid years of activism by many animal advocacy organizations and individuals, conditions for the carriage horses appear to be just as bad now as ever before. And, instead of using their considerable power and influence to ban horse and buggies from midtown, the ASPCA continues to enable it: 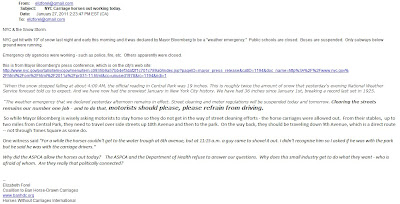 But the good news is that at least we have an unenforceable tethering bill!
Posted by Queens Crapper at 6:44 PM

When asked if he thought Bloomtard was doing a good job, the carriage horse replied, "Neigh!!!".

I just finished reading Grey Mare's anatomy and it's official. There is an illustration of a horse's ass and it was a portrait of the current NYC mayor!

The horse carriages should be restricted to the park only - period!
THEY SHOULD NOT BE riding down 5th Ave and other cross streets, especially in wicked snowy conditions and downpours.

I was forced to work after the storm too.

Doesn't anyone care about me..?

I'm surprised that Queens Crap would be sucked into the propaganda machine of the anti-carriage-horse, pro-(over)development camp.

There are 68 carriages in NYC. The fact is that MOST carriage horses stayed in that day. Four ventured out before it started snowing, and when the weather took a turn for the worst, they were sent home by the ASPCA, and they complied. One other carriage came out AFTER the ASPCA had given the cease-work order, and THAT driver was cited and fined.

Meanwhile, much of the anti-carriage-horse hoopla has been orchestrated by NY-CLASS, headed by Steve Nislick, CEO of Edison Properties. Mr. Nislick wants the land the stables are situated on on the West Side to be developed, and so is working to replace the horses with "antique reproduction electric cars."