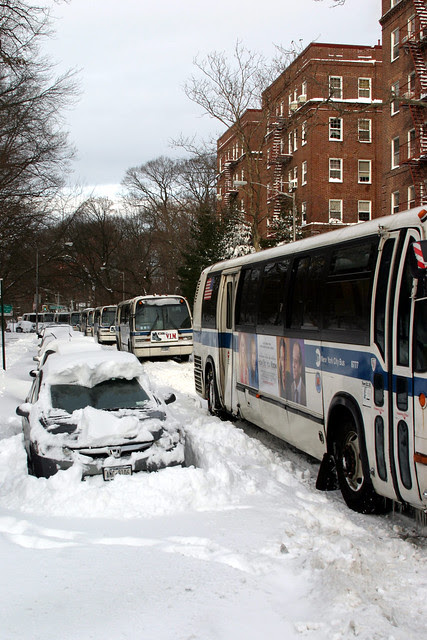 NYC Transit President Tom Prendergast admitted to a series of blunders, apologized to riders and said the agency is focused on fixing shortcomings.

But Council members were far from mollified, accusing executives of being unwilling or unable to give clear answers to their questions.

"We got the runaround, and it really left me not feeling any greater level of confidence the MTA can handle the next storm," Council Speaker Christine Quinn said. "Today was an abject failure."

More than 600 buses were stranded, and several trains with passengers were stuck - one for about seven hours. Service on some lines was shut down from end to end, as were significant open-air stretches buried in drifts.

Amazing how the City Council took their wrath out on the MTA bosses but not on city bosses. They are calling for the firing of the transit bosses, who did make mistakes, none of which resulted in DEATH. But when it came to city leadership, no one on the City Council bothered to ask why the head of EMS was unfairly scapegoated while those calling the shots in the Bloomberg Administration paid no price at all except for a grilling that will soon be long forgotten about.

That's because 1) they are still afraid to piss off their billionaire god, and 2) they can't criticize him or his appointees knowing that they took part in the debacle by extending term limits for their own selfish reasons. Dear City Council: You want someone to blame for the mess, look in the fucking mirror.
Posted by Queens Crapper at 12:52 AM

Folks, Crapper must be on vacation. Someone's filling in for him. IMHO

Crapper is 110% correct Bloomberg and the DASNY union officials have blood on their hands, but they are so above the fray they dont get it.

Actually, once Council Member did ask why the head of EMS was unfairly scapegoated. It was during the televised hearings and as usual the administraton did not have an answer.

Gee, I thought union guys were driving (or not driving, as the case may be) those plow trucks. Seems to me the unions are the ones f-ing middle class New York, as usual.

Why was the EMS supervisor demoted again?

oh yes, he couldn't get his ambulances to the sites due to the wonderful "Plowing, Snow Job".

Yep, Blame the guys that live in the areas snowed it.

Let's stop the nonsense here --there was ONE initial failure point: No declaration of a Snow Emergency.

That one action would have gotten all the assholes in the idiotmobiles off the road (the City towed over 2200 abandoned cars) it would have implemented the MTA's emergency policies and gotten buses off the streets and curtailed outdoor mass transit.

Then, -If- in fact the DOS staged a slowdown it would have been more clear-cut as where to affix blame.

The Mayor failed on this one.

If you click the link above, you see the Post says that was Sadik-Khan's responsibility. Not sure if that is true or not.

"Then, -If- in fact the DOS staged a slowdown it would have been more clear-cut as where to affix blame."

please explain why a snowplow would be "plowing" a street with its shovel a foot and a half off the ground?

i saw it with my own eyes...it made two passes and didn't touch any snow.

Oh yeah? Guess which finger you're getting!!!

The Department of Transportation is supposed to keep traffic moving. A Snow Emergency should have been declared. Saddik-Khan was appointed by the mayor to do just that (or so it would appear) Both Bloomberg and bicycle lady Saddik-Khan put the safety of New York City in jeopardy. Some New Yorkers paid for this idiocy with their lives.
She deserves to be Fired and if she likes Amsterdam (she seems to be trying to remake Manhattan into the "new" Amsterdam. New York is better than that.) so much she can move there herself. She's NOT a New Yorker and neither is Bloomers.

We'll always have Chancellor Black...who kept the schools open even though teachers couldn't make it to their schools during last week's storm. Brilliant! Fun City, eh?

Everyone in my office made it to work after last week's snow. So did their children. Can't imagine why the teachers couldn't get to their own jobs. You just have to get up a little earlier to leave a little earlier.

Please excuse my previous silly comment. The children "made it" to school after the snow. (And I got to order some Girl Scout cookies, yum)

Everyone in my office made it to work after last week's snow. So did their children. Can't imagine why the teachers couldn't get to their own jobs. You just have to get up a little earlier to leave a little earlier.

Helen, we're so happy for you. What about the Brooklyn teacher stranded in her Staten Island driveway? I guess if you're OK then all's right with the world? By the way, I'm glad that your children made it to work!

Please forgive me? That was a story that I missed. I am sorry.

Staten Island is always being dumped on by NY Pols and I am sorry to have done it even though it wasn't my intention. Again, please forgive me (and thanks for wishing the best for my children:)

@ Helen
Just because you didn't experience hardship during the fast moving storm, it doesn't mean that others were OK. I agree that it was a mistake to open the schools or to at least delay the start time. It's just another sign of the Bloomturd administration's lack of empathy for this city's citizens.

Thank you, Anonymous. Will be more considerate in the future. Thank you for the lesson. That WAS very selfish of me.

We're New Yorkers, we pay the highest taxes in the U.S.A. and we ALL deserve better than Bloomturd's crappy "administration".

"What about the Brooklyn teacher stranded in her Staten Island driveway?"

Someone was stranded in her driveway when there was less than a 1/2 foot of snow? I guess she should have prepared in advance for an alternate means of transportation or gotten up early and shoveled herself out. The SI mass transit system was running and buses go over the Verrazano bridge. Give me a fucking break with the excuses for the last "storm".

Yesterday's ice storm was way more dangerous yet the schools were open and no one complained.

Someone was stranded in her driveway when there was less than a 1/2 foot of snow?

Maybe it was on top of the snow that the sanitation department has yet to remove from the streets. In Bayside, Queens yesterday I found some of the streets to still be narrow with cars jutting out into the street, limited availability of parking spaces due to ice mountains, and other obstacles to drivers. Also, some parts of the city had higher amounts than others. The point was tiing. The snowstorm was still in progress at 5 a.m. when the school opening was announced. A delay would have been more appropriate.

Yes, there were different accumulations all over the city, but they didn't vary by much, and most of the city was quite passable. You should assume school is open until you are told otherwise. Ridiculous that a greater percentage of kids than teachers made it in.

The real problem is that the snow (now ice mountains)from the original storm has been piled on top of catch basins which caused a lot of corners to flood yesterday. There's still a lot of cleaning left but the press is too busy pursuing culpability to notice!

Now why would the City Council have blood on their hands? It's not like the majority of them gave Bloomberg his illegal third term? Oh wait, they did.