Wrath of Sadik-Khan gets FOILed! 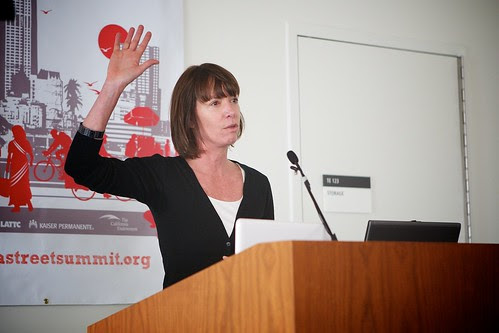 From the Neighborhood Retail Alliance:

We all know by now how NYC DOT Commissioner is trying to unilaterally alter the city's streets so that we can better resemble bike-friendly Copenhagen. Now the stated rationale for this extreme makeover, is that it is being done in order to reduce traffic and make the city safer. But, there's a fly in this particular medicinal ointment-and that is, of course, the mayor's brazen hypocrisy all over the city, but particularly in the outer boroughs, in promoting car dependent mega-projects that will counteract any possible environmental good that could come from reducing the city's car and truck traffic.

Well, it now looks as if Sadik-Khan is a Bloomberg partner in crime-as we have discovered in one e-mail that was obtained by Willets Point United from NY State DOT. The correspondence is between local DOT administrator Philip Eng and Commissioner Stanley Gee. Here it is:

From: Eng, Phillip
To: Gee, Stanley ... (and many other key names at NYSDOT involved with the proposed Van Wyck ramps)

Background:
Back in May 2010, NYCDOT questioned on our Bruckner project the traffic modeling, growth rates and projected traffic diverted onto local streets. Calling into question the baseline condition that is [sic] utilizes data and assumptions from NYMTC's Best Practices Model [BPM]. Regional review of issues and comments were sent to NYC in July 2010.

More recently I informed NYCEDC that this puts us in a dilemma now that the City wants us to approve their sensitivity analysis on Willets Point Redevelopment. Our concern is that the City is using the same baseline condition, data and assumptions on Willets Point and knowing that the City has raised questions makes it difficult for the Region to sign off. NYCDOT does not believe they have called into question BPM.

JSK noted that she will be sending me a letter holding me personally responsible for holding the Willets Pt project hostage. I'm okay with that as we need to ensure that we have thoroughly reviewed the issues and that they are resolved satisfactorily. I told her that we need to have our staff meet (sometime next week) including NYMTC and go over the concerns raised by the city and bring them to a resolution.

Once and if we are convinced that there is no inconsistency on the City's part, we hope to be able to jointly move forward.

NYMTC and FHWA are in agreement that the City has been inconsistent and we are all concerned what this means for projects that rely on BPM. We will be reaching out to them today to further discussions.

So, the SDOT, in doing its proper due diligence and questioning the data submitted by NYC EDC, is under a threat from Ms. Tricycle-someone who appears to be comfortable with the fraudulent fudged data that the EDC consultants have submitted-and has caused all of the delays in the approval process for the Willets Point/Van Wyck ramps. Unable to argue from the facts on the ground, the commissioner is issuing woof tickets.

What this all means to us, is that there is a compelling need to open up this entire review process to public scrutiny-and take it out of the unclean hands of EDC. When legitimate questions are being raised and responses are given that threaten the honest broker, you just know that the locals are trying to rig the entire game. Its past time for a little sunlight, no? The Bloomberg Bunko Squad needs to be exposed.

So, in a nutshell, Janette Sadik-Khan, whose job it is to be concerned about the flow of traffic in Queens, has been pressuring NYSDOT to rubberstamp the City's Willets Point/Van Wyck ramp plan because the EDC wants the project to move along even though the plan as it stands is going to make things 10x worse.

I think it's time to get the Feds on the case.

Photo by GarySe7ev on Flickr
Posted by Queens Crapper at 9:31 AM

"Transportation Commissioner Janette Sadik-Khan, who wants to get New Yorkers out of their cars, owns stock worth $10,000 to $80,000 in Anadarko Petroleum and Occidental Petroleum."

Anadarko was a partner with BP in the blown-out oil well in the Gulf.

Stanely Gee the man who sent a 35 year Senate veteran, Senator Padavan a letter stating that if the 3rd avenue exit off of the Whitestone Expressway were to be permanently closed, it would in effect make the last exit before the bridge the Cross Island Parkway. (We have a copy of the letter on file) Misinformation? Is it not already the 20th avenue exit?

Yet, Senator Padavan accepted the response and forwarded it to our organization. We had to call and email the Senator and inform him of this error, who in turn quickly shot off a letter to Mr. Gee and we are still awaiting a response.

It has become apparent a long time ago that these people do not only not know what they are talking about, they do not even take the time to research the area in question before they respond to our elected officials. Nor do they know that a Parkway does not allow for Commercial Vehicles, in effect negating their statement.

another sad Bloomberg appointee. When they talk they say nothing- They're the mere servants of a crappy millionaire. the upstairs staff.

Fire her first, then call in the Feds.

Fire her. Plain and simple. This behavior must not be tolerated in our government. She is incompetent and wasting our resources. We need cops and firemen and emt's. This lobbying of HER private interests has made our streets very unsafe and have been the cause of MANY cyclists deaths.

Fire her. Now. Then fire Bloomberg and put him in jail and make him pay back all of the tax shelters he made overseas by having his sludge fund crews rape our 401K's.

Put them all in jail. Thieves.

did you say a 35 year senate veteran? was it in the same district? has he always represented the same community? how the f____ did he not know the answer? you said he forwarded the response to your organization? AND IT ONLY TOOK 35 YEARS FOR THE RESIDENTS OF YOUR COMMUNITY TO GET RID OF THAT IDIOT? YES, PEOPLE DESERVE WHAT THEY ELECT.

McCarthty needs to share a cell with her, along with Nathan Grey.

Is not that something people care not one thing about?

Enoughs Enough !
Out with all ZOG now.
The people need to show up at meetings in large groups and give them hell !!

Let these bastards who think they are superman (and women)know they are being watched by many and can take a fall.

Out with all A-S's who try to get away with their anti-semitic crap by using acronyms as well!!!

"This lobbying of HER private interests has made our streets very unsafe and have been the cause of MANY cyclists deaths."

And I would say she's quite competent, considering how much she's done to improve our streets for so little money.

Therefore, we can forgive her for pressuring NYSDOT to approve ramps they know will make traffic worse?

"And I would say she's quite competent, considering how much she's done to improve our streets for so little money."

What is it $200 Million for More bike lanes? That's not "So Little Money"
Have you taken a trip down Vernon Boulevard or 73rd Avenue lately butthead. No one uses her bike lanes.

"What is it $200 Million for More bike lanes? That's not "So Little Money"
Have you taken a trip down Vernon Boulevard or 73rd Avenue lately butthead. No one uses her bike lanes."

Actually, under her tenure, the bike lane program has cost $8 million, only $2 million of which the City paid for. Not $200 million, obviously. And your anecdotal claim that "nobody" uses the bike lanes cannot be taken seriously. Actual studies clearly show otherwise (besides, now one uses the sidewalk on Vernon Blvd -- should we rip that out too?) Obviously there are fluctuations in usage, and some are more popular than others. The key in overcoming that is 1) improving connectivity of the bike lane network, and 2) promoting bicycling much more heavily. The City's plan for public bike share will really address #2. Could be huge and game-changing!

Note that I'm not really addressing JSK's role in this Willet's Point battle. I don't know much about the controversy, but on the face of it, it sounds like a bad deal for the folks who have businesses there, and we sure don't need any more destructive highways anywhere.

just be wary of Lipsky. he's a slick son-of-a-bitch who plays fast and loose with his "facts". Remember, he's a hired gun who will shill for anybody with a big enough wallet. He may be on your side now, but money talks, as is evidenced in his shilling for Ratner, Markowitz and Bloomberg's Atlantic Yards project.

Yes, it's on Lipsky's blog. But that's a public document, government communication, that's posted there.

Whats does some woman lawyer from San Fransisco know about New Yorkers needs and likes.
Would the beantown Mayor call the plumber to fly a commercial 747 airliner full of people ?

This city need the feds to do some investigation's. Big money and power has run a-muck and unchecked to long

j/sadik/k and al gore and armand hammer and joe stalin are part of the same sick liberal/democrat/progressive gang as LINO, the bike delivery boy commander from the U.E.S.