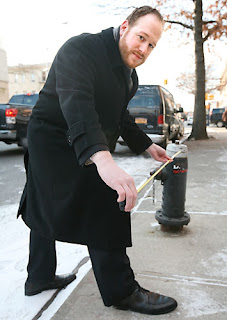 Here are two laws that would definitely measure up.

A South Brooklyn councilman wants the city to paint red lines on curbs so that drivers know exactly how far they must park from a fire hydrant — and he wants to cut down the “no parking” zone from the longstanding 15 feet to just 10 feet.

Earlier this month, Councilman David Greenfield (D–Midwood) proposed the legislation that would require city workers to paint markings to the left and right of all 109,800 hydrants in the five boroughs. That bill works in tandem with another bill by a Queens lawmaker that would allow drivers to park five feet closer to a hydrant.

“The original 15-foot rule was issued so that fire trucks could parallel park next to hydrants,” Greenfield said. “But those trucks don’t have time to parallel park, they just pull up next to the hydrant. So they don’t need a huge amount of space.”

An extra five feet on either side of a hydrant would not only spare some drivers a ticket, but also create roughly four additional parking spaces per block.

Presently, drivers can be hit with a $115 summons for parking less than 15 feet from the pump, and without a tape measure in the glove compartment, it’s tough for many residents to know just how far that is. That’s where the red paint bill comes in.

The idea seems ideal for motorists, but the councilman has not yet determined how much the more than 200,000 curb marks will cost — and how the city will find the manpower to do all that painting.

Let's invest in paint for this instead of for bike lanes.
Posted by Queens Crapper at 12:32 AM

The city will never go for this because they make a lot of money precisely because drivers don't know where the no-parking zone is. Painting red curbs would cause them to not park there -- and tickets given out to decrease and fine revenue also decreasing.

Exactly, KW. The city wants to keep motorists deliberately ignorant about whether or not they are in violation.

I would guess that about 30% of parking regs are for a legit purpose, and the rest are to pad the city's coffers.

We should have a petition going for this one!

The azzholes that issue parking tickets REPEATEDLY prove their stupidity. They do not know the parking / traffic laws and/or issue tickets to make a quota.

This law will empower US. We were either behind the painted line or not - no more just going along with whatever the idiot traffic agent has to say on this.

"Let's invest in paint for this instead of for bike lanes"

Let's not. Until motorists learn to comport themselves in a mannerly fitting, they can all fuck themselves. Think of that next time you're behaving as selfishly as possible on the road.

"Let's not. Until motorists learn to comport themselves in a mannerly fitting, they can all fuck themselves. Think of that next time you're behaving as selfishly as possible on the road."

10 to one a bicycle "Advocate" wrote this ignorant screed

There used to be yellow lines by fire hydrants BTW - I know some of you are too young to know this or too old and you forgot.

Anon # 2, you are responsible for knowing the traffic laws. If you don't understand what 15 feet means, maybe you shouldn't be driving. It's not rocket science.
I'll agree that drivers are generally selfish assholes. Just like pedestrians and cyclists.

I've seen some arrogant bikers out here in northeast Queens who were in the process of fucking themselves when I encountered them. You don't pass a car on the left, even on a side street, bikers!! You aren't always seen!! I'm sure these people were part time semi suburban "bikers" out to make a point-that they owned the road, and I, the driver who was just trying to get from one place to another without hurting anyone, could go fuck myself over by the Cross Island Parkway and Northern Blvd.

This seems like a pretty bad idea. Well, the line painting I guess is fine, as long as it's paid out of more parking tickets or something like that, because, really, drivers ought to know how to park 15 feet from a hydrant, and I shouldn't have to pay for their ignorance.

But the proposal to shrink the buffer is both dangerous and foolish. It's dangerous for obvious reasons that the FDNY has already commented on. But it's also foolish because it will suddenly open up thousands of "free" parking spots, which will only generate more car traffic. And that means more congestion, more injuries and deaths on the road and just more misery. No thanks! If you want to manage parking better, and if it's so "valuable", you ought to be charging for it.

They should paint no parking areas not only for hydrants, but also driveways in yellow.

People need to give more space to see on coming traffic when you get out of a driveway.

Sure this will cut down on parking spaces. That is good. Because you morons out there must start to put together effective resistance to illegal conversions and new development.

You can measure 15 feet by eyeballing it? I don't think so.

Owning a car and parking it is not evil.

Owning a bike and using it to commute is impractical in rain, snow, sleet, hail, etc. And in case you haven't noticed, that happens a lot here. The public transportation system sucks, too, and if you want to get anywhere in a timely manner, especially on a weekend, a car is practically a necessity.

If the govt needs extra reason, on metered parking streets, they can get more cars on there, which means more revenue (via tickets).

But yeah, that guy was right. you should know exactly 15 feet. It's hard by looking at it, that's why I carry a tape measure in my car.

"You can measure 15 feet by eyeballing it? I don't think so."

Uh, you sure can, especially if you walk it. How long have you been driving?

"Owning a car and parking it is not evil."

Nobody said that, and I certainly don't believe that. That's a pretty cheap way to conduct an argument.

"Owning a bike and using it to commute is impractical in rain, snow, sleet, hail, etc. And in case you haven't noticed, that happens a lot here. The public transportation system sucks, too, and if you want to get anywhere in a timely manner, especially on a weekend, a car is practically a necessity."

It's sometimes impractical, yes. And our public transit system needs improvement. But I'm afraid I don't see your point. All I hear from you is anger and bitterness, not solutions.

A possible solution which a friend of mine suggested on Facebook is that we ban overnight parking for cars with out of state plates. That would force cheap bastards to register their car in NYS which would mean more revenue, lower fees for drivers. Also means more parking spaces available.

Out of town visitors could purchase a street parking pass for a fee. Again, more money for state.

Crappy is on to something with his out of town plate requiring a paid license to park for free overnight!

Otherwise the car will be torched! LOL

I am all for reducing the length to 10FT from a hydrant. Go for it and the out of town guy dating or whatever your daughter!

"Presently, drivers can be hit with a $115 summons for parking less than 15 feet from the pump, and without a tape measure in the glove compartment, it’s tough for many residents to know just how far that is. That’s where the red paint bill comes in."

This assumes the D.O.T. will actually USE something to measure with. When they painted the yellow lines years ago they eyeballed the distance, I recall a big"Eyewitness news" investigation conducted by the late great Milton Lewis to that effect.

How about we ban bikes from the subawys?

Thanks asshole, its rush hour and your dirty wheels are rubbing on a dozen people. dickheads. Fuck you if its raining. Buy a poncho.

at the legal distance from the hydrant a 12" mark can be painted to warn the motorist. do not paint 10' or 15' of the curb.

When i was a kid(early 60's),the fireman used to go out and paint the yellow lines in front of the pumps.........What happened to that practice? i guess it went away like the bell on the pumpers....

the homeowners on the block can easily paint a mark at the legal distance at the hydrant. this would save the taxpayer the money that the city thieves would extort from them.

their home safety from fire destruction is a priority.when a call to the 111 pct. is made for car blocking the hydrant,they do not respond?????

The problem is with the DOT who DO NOT ticket cars that are parked too close to fire hydrants thereby telling people "it's ok to do so" by their incompetence. If these people who get paid to do this actually DO IT, the city would have legitimate income coming in.

The other travesty I see everywhere is fire hydrants on corners and cars parked in front of them, blocking the crosswalk.

THERE IS A REASON A FIRE HYDRANT IS PUT ON A CORNER, FOR ACCESS FOR THE WHOLE INTERSECTION IN CASE THERE IS A FIRE.

Half the time, the crosswalk is not even sectioned off clearly and worse yet, some of them have cut outs for cars to park IN THEM, 5 FEET AWAY FROM THE HYDRANT.

And only an imbecile not familiar with laws would park near them.

As a car owner who has been ticketed for precisely this violation, I support the effort to paint 15' markings (or reduce the buffer to 10' and paint 10' markings).

As a bicyclist and person of common sense, I feel that doing so is a market intervention to benefit car owners that should be scrutinized by Krappy just the same as he scrutinizes bike lanes.

Why should cars get preferential treatment, Krappy? Do they vote?