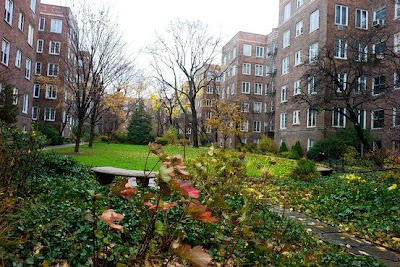 The sprawling garden enclosed by the 14 stately buildings of Hawthorne Court in Jackson Heights is an inviting oasis of greenery.

Just don't step on the grass.

"Residents and guests are asked to refrain from walking on the lawn and the planted areas surrounding the Center Circle and either end of the Garden," the co-op's official garden rules say.

The grass-walking ban has pitted some long-time residents against a newer generation of young families attracted by the large, historic co-ops—and their coveted gardens. "More park, less slope," read some old housing ads, in reference to Park Slope, Brooklyn.

The question of whether walking should be permitted or not has proved not so simple to answer, digressing into debates on parenting, political persuasions and ultimately, control.

While similar rules and sometimes struggles occur in other private green spaces across the city—from Forest Hills in Queens to Gramercy Park in Manhattan—nowhere are such battles more pitched than in Jackson Heights because of the concentration and size of the gardens and the scarcity of public green space.
Posted by Queens Crapper at 12:53 AM

Have the new yuppies hire some illegal Mexicans to take care of the lawns like all the rest of them do. Bloomberg won't say anything.

Hire some illegal Mexicans ?
Doubt it
I believe that's one of Gene Simmons building's, he's strictly by the book. His mother who immigrated legally (now lives in Manhasset) started the garden 30 years ago. That group of buildings is or was predominantly grouchy elderly Jewish people

Queens was designed with so many planned communities - but the ongoing mentality is to slash and burn, build and destroy and the shock troops for this are always the newcomers, be the hipsters or the immigrants.

The people behind this are the local politicans who could take a stand, get involved in public education, but by and large are a bunch of clumsy scumbags that would turn the communities over to the developers for a song.

And since they get re-elected by majorities only seen this side of Pyongyang there ain't a damn thing you can do about it.

The Towers accross the street from one of the most overcrowdes schools in the City, Joseph Pulitzer I.S. 145. Ask how many of Tower people sendt their children to that school? NONE! They attend Garden School, United Nations Academy etc...

Wonderful buildings, amazing apartments, lots of big $ influential people live there, and have been forever. Heck so influential that they were able to get Illegal Basement apartments legalized.

However,the older residents did care about neighborhood. The new wannabe yuppies like the JHFamilies, just want to Gentrify the neighborhood and keep pushing for a whole food market, and had a party when Starbucks opened could give a shit about the neighborhood. They come around on the weekends and lock themselves up in their Million Dollar Apartments during the week. The Nannies that raise the children are given specific orders as to where they can and cannot take the children and who they can and cannot play with.

Jackson Heights has some of the most amazing gardens in all of New York, with even more amazing apartments.

If only the new JH Families would take a real interest in the neighborhood.

Wow lot's of issues folks have on their minds. I have seen these gardens in the 80s when someone I knew knew the value of appartments the gardens come with - Very unique to say the least - they are all in the grand tradition of pre-wars.

What's up with the gardens that they cannot be used? A good landscaper can modify the gardens so that they can be used and yet maintain a good majority of green space. But I suspect there is more to this story and there are 2 issues #1 is noisy kids running around is probably the biggest issue & #2 Money - these apartments have tremendously low maintenance costs and most elderly owners wish to keep it that way.

Yep not only noisy kids running around but new insurance issues.
The illegal alien parents of this new generation of kids infecting and overpopulating every street & school in Queens don't give a sh*t what there kids do.
That is --till a kid get's hurt, then they scream JACKPOT and sue everybody in sight.

In this now multicultural cesspool called Northern Queens who is to stop some Yuppie tenants kids from letting a group of wild chimps into the building ? You can bet all "nannies" let their 5 plus CASH kids into the building as well

Have the new yuppies hire some illegal Mexicans to take care of the lawns like all the rest of them do.

Well, duh! Who else are they going to hire? Other yuppies that would charge $100/hour?

No, it was meant to be smoked, not walked on!

And a few other places as well.

Ask how many of Tower people sendt their children to that school? NONE! They attend Garden School, United Nations Academy etc...

They come around on the weekends and lock themselves up in their Million Dollar Apartments during the week.

Yep not only noisy kids running around but new insurance issues.

Not only that, but would you really want to let people do what they please in the shared gardens? Pretty soon you'd have the "vibrant and diverse" children playing soccer and breaking windows, and their parents would have barbeques and blaring their God awful music for all to hear.

Jean-Paul Sartre was correct when he said "Hell is other people".

Million dollar apartments in Jackson heights? yes the Towers and the Chataeus to start, and BTW the Gardens in question can only be accessed by the residents.

Al is correct, the Towers average around $800,000 and up. 3-4 bedroom all Master size, formal living room, dining room total average of 1800 - 2000 square feet, with a maintenance of approximately $1,00 each, and yes you can not get in unless you live there.

Al is correct, the Towers average around $800,000 and up. 3-4 bedroom all Master size, formal living room

Look at the website of Michael Carfagna - the highest listing he has is $719,000 for a classic 7 in the Towers. That's still not $1 million dollars.

You're not going to get anyone paying $1 million for Jackson Heights in this economic climate.

Several have sold for a Million.

Several have sold for a Million.
Look at records.

Why should I look it up?

You're the one making the claim, you provide the evidence.

You either:
1.) Know that you can't back up your claim with evidence, because you're talking BS
or
2.) You're intellectually lazy

Or any elderly people are grouchy. I know I am fast becoming one.

I will locate the information and get back to you.

WOW WHAT AN AHOLE INTELLECTUALLY LAZY/BS/

AND WHAT ARE YOU? AN AHOLE?

A little angry? "Your culture" and what culture is that?

DaSilva, let me guess Argentine who does not want to be considered Hispanic?