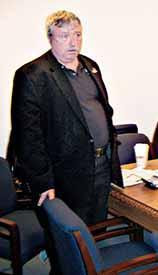 Gene Kelty, 56, was just a kid when the '69 storm hit. He lives in the same Whitestone house and remembers the locals throwing snowballs at Lindsay when the mayor finally appeared in Queens.

His advice if Bloomberg comes to the borough: Duck.

"If he comes to Queens, we would have thrown snowballs at him as well," Kelty said.

Photo from Times Ledger
Posted by Queens Crapper at 12:54 AM

No fear that Bloomberg is coming back to Middle Village anytime soon, just look around all of the side streets are in-passable. We now know which blocks and houses lose their value when the potential for snow storms hit. It's those that you cannot unclog your car to leave to go to work or go anywhere walking without struggling or if there is an emergency such as a fire or medical whom cannot reach your home to save you:( nor can the school bus pick up or drop off your child!

He would probably get the DOI after this guy and have him arrested and jailed for throwing a snowball.

Is this the same Gene Kelty who kisses the Mayor's butt every time one of Bloomberg's neighborhood destroying projects comes before Community Board 7? So now we know, Kelty dislikes snow but loves greedy developers. Strange world!

Let's get real here; Bloombag is 68, he has three years left to serve. He'll never be up for office again, he's worth $15-16bn and doesn't live in Queens.


Lindsey was a Liberal Republican back when such was possible, he was up for re-election, was not rich (died essentially broke) and had a lot of militant unions to deal with.

He was a good man but a bit overwhelmed, not the cynical smartass we currently have. Nothing will happen to him.

I AGREE WITH KELTY?

End of Days is near I fear.

Where is the outrage over all the union workers and supervisors that staged an intentional slowdown? Hypocrites.

What about Kelty's sidekick Apelian? He lives across the street from Liu, and no doubt that street was one of the firsts to be plowed.

Let's get all the proof first, ok?

Would Kelty be able to duck if someone threw some snowballs back at him?

the public schools were closed for the holidays.....

many homeowners saw the d.o.s. employees skim the top of the side street snow with their plows ,still leaving us stranded. they videos should be proof enough of the "theft of services" crime done . fire them now.

call halloran's office if you have a tape , anon on a pay phone. you do not need any retaliation by the union goons.

a crime is a crime ,bloomberg or d.o.s.employees. who is guilty ???

For all you right-wing Union haters:

You really think things are gonna get better if the city starts having to pay private contractors 2x as much for emergency services?

You people are either shills for the rich or complete idiots.

Is that a photo of Kelty or a Macy*s balloon?

I hope Kelty is ready to retire.

But Bloomberg might have his FDNY pension revoked for speaking treason against his "emperor"!

I agree with Kelty. The exact same thing occurred to me. Bloomberg has overstayed the party and this is his Lindsay moment.

Keltys not kidding !
I know several people who put snowballs in the freezer for Mikes Memorial parade through Little Neck

is there a difference between the d.o.s.union baby killers who put the elderly in jeopardy and did not plow the streets properly ,and a mafia hit man?

I'd pack a lump of doggie poop in my snowball!

Horseshit is hard to find on the street these days...unless, of course, one enters the "halls of government" where it abounds.

That's how we think you're doin' Mayor Bum-berg!

Hey Gene. Make your snowballs NOW! They're the only ones you'll ever have.

You know I saw this post and was a little surpised about Kelty saying the right thing. Then after a few days I realize it does't matter what he says, he usually says things just to say them. No really expecting anything to be done about what he says. He is a full of shit huge peice of Crap.