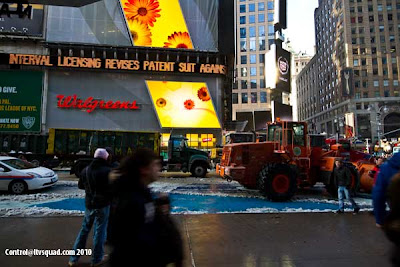 It was a breeze getting through the snow from Columbus Circle to Times Square yesterday -- all you needed was a bicycle.

While most of Broadway from 48th to 58th streets remained impassable to cars and buses in the blizzard's wake, the city was rolling out the red carpet for Mayor Bloomberg's favorite class of commuters: maniacs and deliverymen on two wheels.

Astoundingly, it diverted precious, strained resources to plow the wide but little-used Midtown Broadway bike lane Tuesday night, even as streets all over town were still waiting to be dug out.

Yesterday, while cars and trucks inched their way south, cyclists had a clear field for 10 blocks. Except for a few windblown traces, they were as snow-cleansed as the East 79th Street block that Bloomberg calls home.

Not that many riders took advantage: We counted three in a 15-minute stroll along the bike path, which runs parallel with an equally underutilized asphalt "pedestrian mall."

But Broadway below Columbus Circle remained slow for motorists even after finally being cleared. Vehicles squeezed into a single lane at many points, thanks to wayward drifts, cars parked at the sidewalk and others parked in the mid-avenue buffer lane designed to shield the bike lane from moving traffic.

Is there any better evidence of the warped priorities of Bloomberg and Transportation Commissioner Janette Sadik-Khan?

The Broadway bike route is one of many installed throughout the five boroughs by the DOT over objections by residents, store owners, business advocates and community boards.

With the mayor's backing, Sadik-Khan rides roughshod over the public will despite repeated promises to heed their complaints.

Asked to justify the waste of plows, a Sanitation Department rep bafflingly said bike lanes are cleared "once primary, secondary and tertiary routes are complete" -- which, of course, was nowhere near to being done -- and "cleared by the truck plow on the route where the bike lane is. The department starts cleaning bike lanes when we clear crosswalks and bus stops." 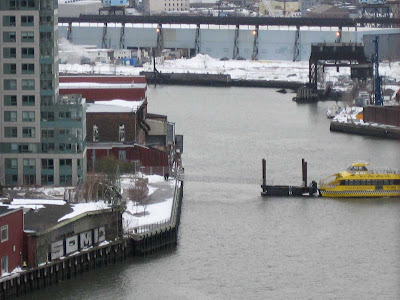 Image attached is of one at Schaefer Landing, from the Williamsburg Bridge. Note the TWO waiting commuters." - Kurt

And the buses are still not running properly.

Top photo from LTVSquad
Posted by Queens Crapper at 10:29 PM

Bloomberg's priorities must be followed regardless of what people outside of Manhattan think!!!!!

I'd like to know why the city has trucks plowing streets that have no snow left on them. I saw several trucks scrapping asphalt or moving an inch of snow on the road without thanking the sun for doing most of the work for the last two days. This behavior started in my neighborhood yesterday and continued today. I'm rather certain there were streets that needed plowing yesterday more than my street.

The head of Transportation Alternatives had an op-ed piece in the Onion stating that if we all adopted the cycling lifestyle , snowstorms would be eliminated. He elaborated that the gas powered engine is the reason we have winters.

While driving cross town to reach Queens in Manhattan the other day I came across the pedal-cars and horse carriages clogging some of the worst traffic on 57th St.

The pedal-cars should be outright banned in NYS and the horse carriages restricted to operate in a limited area. It's a crime to see horses in bitter cold at night breathing car exhaust in icy frozen surface traffic.

Yes, the response to Queens was the worst I have ever seen. Although the water taxi is a private company and is not sun by the mta or the city. Maybe they should operate city buses.

Where are all the bicycle trolls who comment here excoriating any post critical of the bike lanes?

@Cav, the bike readers are out riding their bikes while the cars are trapped in the snow. It's wonderful for a little while.

"@Cav, the bike readers are out riding their bikes while the cars are trapped in the snow. It's wonderful for a little while."