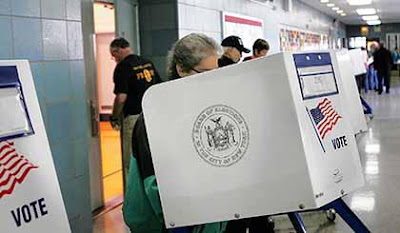 Ten City Council members were preparing to introduce a bill that would extend municipal voting rights to legal immigrants, but not all lawmakers are pushing for suffrage.

The potential bill would allow the city’s 1.3 million tax-paying immigrants who hold green cards — and about 500,000 ﻿live in Queens — to vote in local elections, according to a spokeswoman from I Vote New York City, an advocacy group.

That means that non-citizens could vote for the mayor, the city comptroller, the city public advocate, members of the City Council and the borough presidents.

“They are entitled to vote in their elections,” said Councilman Dan Halloran (R-Whitestone). “When you’re a citizen of America, you have the right to decide America’s future. If it’s their intention to vote, they can become citizens.”

He added that legal immigrants do not have a vested interest in the community and are not considered when passing legislation.

“They’re not apportioned when we look at constituents,” he said. “That’s not how it’s done.”

Halloran also said that the legislation might run into legal trouble.

The language in it was vague, he said, and would be at risk for manipulation by people of questionable resident status.

“If somebody is here on a student visa or a work visa, that is generally intended to be a non-permanent,” he said. “They have no business voting.”

Halloran added that the measure might not even be legal, since the U.S. Constitution requires voters to be citizens and New York state requires them to be residents.

“It’s in violation of federal and state law,” Halloran said. “It has no chance.”
Posted by Queens Crapper at 12:42 AM

We knew this was coming.

i hope Halloran is correct. if they want to vote become a legal citizen.

otherwise get out of our country.....

voting is a privilege of being a citizen of the USA. It is not to be extended to non-citizens.

A second revolution is coming.

it will never happen

Actually, NYC used to allow immigrants who weren't yet citizens to vote in municipal, not national, elections. The Irish were registered literally as they stepped off boats. I'd have to study this more, but the move certainly has historical precedent.

"the move certainly has historical precedent."

Historical precedence Doesn't mean it was right then or is right now.


Really...Then what would be the point of paying taxes, floowing the laws and being a good CITIZEN.

This kind of shit really makes you hate government.

Who are the ten Council members?

Yes, I would like to know who the 10 council members are so I can help campaign against them in the next election. If you come here from another country, voting is a right that you need to earn by becoming a citizen first!

"voting is a privilege"

No it's one of our few rights, but in the near future, it will no longer be a right, just something we talk about with fondness.

No, it would be good for the DEMOCRATS. And who in NYC votes the way Fox News tells them to vote? TROLL!!!!!!!

This is why I am embarrassed to be a liberal. Liberals are supposed to be compassionate not give away the farm.

They are term limited out. I am willing to bet Queens and Bronx councilman are behind this

Pull up the gangplank and limit immigration!

Americans have shed blood NUMEROUS TIMES for the precious right to vote.

Now any mongrel can claim it.

The Democ-RATS have historically sought to import their votes but this latest move is a scandal!

There should be several stages to the granting of full U.S. citizenship:

i.e.
You enter as a freshman like in high school.

You don't get to vote until you're a full senior!

AND...if you fail to vote at least once in 3 years your citizenship status is lowered.

It's time to stop selling the privilege of being an American to userers for chump change!

And if you don't agree with my opinion...you can shove your beliefs where the sun don't shine!

Par for the crooked course!

I know one illegal Chinese immigrant woman (with obviously forged I.D) that voted at least twice!

That was going on quite a bit, I've heard, during John Liu's campaign for comptroller.

Some even say the Staviskys hired the vans to move these shady "voters" around from out of district!

the move certainly has historical precedent.

A lot of things have "historical precedents", and have been practiced throughout most of human history - slavery, polygamy, child marriage, cannibalism, etc.

Does that mean we should "look to the past" and follow the examples of our "wise ancestors"?

I'd have to study this more

Yeah, start cracking the books, and report back to us on the results of your research.

"You may be a Baard, but you're no bard. Frankly, you have me bored. You should be forever barred from this board!"

America will soon be dropping from 2nd to 3rd world status.

We have already become an international joke.

If CHANGE was so good so many people wouldn't against it.
Yep, letting any mongrel vote insures Dems stay in power till the end. The sheeple say it will never happen, DON'T bet on that !

Quote:
""Does that mean we should "look to the past" and follow the examples of our "wise ancestors"?""
EMM--YES EXACTLY..The old guys in the wigs saw the possibility of shit like this happening and that's why they wrote the US Constitution.
It needs to be obeyed.
Any politician, judge or imported piece of shit who don't like that can GTF out the country !!

Read Thomas Jefferson's note "The Tree of Liberty" The part no Lib Democrat, school teacher or media person will ever talk about since Sen William "Boss" Tweed and the orange Riot of 1861.

I believe the 10 members are from the progressive caucus and Danny Dromm is one of the biggest supporters of this measure.

"This is why I am embarrassed to be a liberal. Liberals are supposed to be compassionate not give away the farm.

If you're embarassed to be a liberal maybe you should rethink your positions?

"If you're embarassed to be a liberal maybe you should rethink your positions?"

I cannot, there are many people who would allow children to suffer and I feel the government should help minors who cannot be held accountable for idiot parents. I am saddened the DREAM ACT failed but should have limited the age to 12 to be eligible. 16 was too high. This country needs more educated workers.

True Liberals acknowledge that uneducated labor makes too much and unions are detrimental many times to economic progression when the demand for unskilled labor is low like it is today.

Only Legal Citizens are entitled to vote in the U.S. These "Progressives" are rogues of the Democratic Party. They shouldn't be allowed to usurp the Constitution of the U.S.A.

Naturalization laws in the 18th and 19th century were designed to populate the United States. Since healthy people wanted and available, it worked out for that period of history. But for over 100 years, it has been harder but not impossible to become a naturalized American citizen - go to Ellis Island to see what the process involved. The case has yet to be made for trivializing American citizenship. When it comes to voting, we should have the same procedure for renting a car or getting on a aircraft - requiring a valid government-issued id.

Some things don't make sense. Every year 250,000 people come here to get educated at our universities on student visas. When their education is complete and they graduate we send them back home to their country to make money, pay taxes and live their lives as citizens somewhere else. These people are the cream of the crop and we don't let them stay here. Is this a wise thing to do?

Foreign students? Unless they are disqualified from applying for naturalization, they can apply for naturalization and start the process. The fact is many are happy to retain their Indian, Chinese, or Brazilian citizenship and have an green card for residence here.

The give-a-away, take my house and money under my mattress too, oh and don't forget to take my first born too.

Ron Paul where are you _ we need yo desperately - the revolution is about to commence all over in NYC - come join us to protect our rights from these idiots.

I see the dems are looking for new voters.

Here you go: Dromm: Give Immigrants the Right to Vote [VIDEO]

Natch...back door Dromm wants to f--k us all in the ass as well!

Jack-off Heights has been homo-land for years!

What an ugly puss!

I don't get this. They are not citizens.

What is happening to this country???

Obviously this is not going to happen. Don't we have more important things to discuss here?

Oh my god the illegal immigrants are supposedly gonna vote.

Sounds like hysteria to me because many immigrants legal or not in Jackson Heights have no interest in voting.
Check with Lou Dobbs and his legal workers on his ranch.

Doofy Dan is a man of many words but few follow through deeds!

All show and no blow make him as phony as he can be...shootin' blanks as usual.

(LOL)I'm surprised he doesn't show up to Council meetings in his Theod garb.

Finish up your term, Dan.

After that your show gets canceled.