Toby concerned about pork in her hot dogs 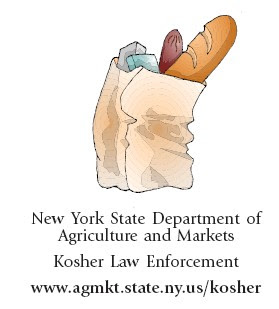 The new year won't be happy for New York State's kosher food inspectors, as Gov. David Paterson decided this month to terminate them as of Jan. 1, 2011, as part of an effort to trim a budget deficit that will probably exceed $10 billion next fiscal year.

Paterson plans to slash about 95 percent of funding for the Division of Kosher Law Enforcement, which is part of the state's agriculture department. ﻿Currently, the state employs eight kosher food inspectors who carry out about 5,000 inspections a year, examining roughly 3,000 food sellers and manufacturers. All eight will lose their jobs.

However, local politicians and other members of the observant Jewish community railed against the decision, claiming that the state will lose its ability to ensure the integrity of kosher products, thus weakening kosher traditions and respect for kosher law.

"These cuts would undoubtedly mean that untrained Agriculture and Markets inspectors would monitor kosher food, resulting in little or no protection from fraudulent products," said State Sen. Toby Ann Stavisky. "Who is going to make sure that hot dogs containing pork products don't wind up next to the Hebrew National ones?"

There are about 82,000 kosher-certified products for sale in New York State, which is the world's largest manufacturer and consumer of kosher products outside of Israel. The state has enforced kosher inspections since 1915.

Interestingly, there is no Division of Halal Law Enforcement... Why was the state funding a religious practice in the first place?
Posted by Queens Crapper at 12:32 AM

Gimmee a break! Who in their right mind would want to pork Moby Stavisky? The thought has ruined my appetite for the rest of 2010...and beyond.

Interestingly, there is no Division of Halal Law Enforcement... Why was the state funding a religious practice in the first place?


It's all about the separation of church, state, and YOUR money from YOU!!!

Certifying food to be kosher or not is solely a religious purpose, fully funded by taxpayers. THAT is BS.

People also don't realize how much money food manufactures pay to have the Kosher certification annually - it's extortion pure and simple.

"The Kosher Nostra:
It turns out that the perpetrators of these elaborate extortion schemes are actually Rabbinical Councils that are set up, not just in the U.S. but in other western countries as well. For example, the largest payola operation in the U.S. is run by those who license the (U) symbol. The (U) symbol provides protection for many products sold in Aztlan and in the United States. This symbol is managed by the The Union of Orthodox Jewish Congregations with headquarters at 333 Seventh Avenue in New York City.

The scam works like a well oiled machine and is now generating vast amounts of funds, some of which are being utilized by the Union of Orthodox Rabbis to support the Ariel Sharon Zionist government in Israel. The website of the Union of Orthodox Jewish Congregations is full of pro-Israel and anti-Palestinian propaganda.

The "Kosher Nostra" protection racket starts when an Orthodox Rabbi approaches a company to warn the owners that unless their product is certified as kosher, or "fit for a Jew to eat", they will face a boycott by every Jew in America. Most, if not all of the food companies, succumb to the blackmail because of fear of the Jewish dominated media and a boycott that may eventually culminate in bankruptcy. Also, the food companies know that the cost can be passed on to the consumer anyway. The food companies have kept secret from the general consumer the meaning of the (U) and the amount of money they have to pay the Jewish Rabbis."

Thank you Crapper, for pointing out another total waste of our tax dollars. Rabbi's practicing religion with our tax money while we close New York state parks. Hey, we got to have our priorities. Mazel tov!!

There is absolutely no reason for this to have ever even existed. If these Jews want their Kosher food and a rabbi is certifying it so, why does the state need to be involved at all?

This is possibly the only decent thing the blind man has done in office. Let's hope no one caves to the whining of the Orthodox and reinstates this enormous waste of money.

Well...thar she blows again (not me thank the Lord)...get the harpoon!

As it is now nobody can pass by her fat ass when walking behind her on a standard width sidewalk.

Phew....you don't want to be downwind from that unsanitary piglet now do you?

Better step off the curb and pass her quickly in the street before she passes something that would make a dog faint.

All those years of corruption grows some nasty cheese in her digestive tract.

Maybe Evan is forced to perform that particular "duty" to perform for his mom.

Shmear a little chicken fat on a non-Kosher hot dog and enjoy Toby.

Enjoying reading about the family Evan?

Division of Kosher Law Enforcement?? I am not paying for that, the consumer is already paying a higher price because a Rabbi strong arms the producer to get their products certified as Kosher. Since when is government is a watchdog for religious practices? Besides all those Hall-ah trucks sell pork ingredient hot dogs and the Muslims scarf them down heartily - they don't die it's only that they are getting ripped off by their own kind. Go to Kosher court boys and girls if you abide by kosher practices or go get a lawyer to sue the provider, no city agency should police religious practices. What's next Buddist tufu issues?

That's Toby trying to mend fences with the observant Jewish constituents that she has largely ignored.

Kosher enforcement has been part of state law for most of the last century. But at this point, it's better off privatized. Problem is that anyone with a black hat can claim to be a rabbi.

"Congress shall make no law respecting an establishment of religion..."

The First Amendment to the U.S. Constitution

You mean jews getting special treatment from the government??? I would have never guessed!!!

Pork and Beef mixed together is... delicious!!!!

The more animals combined, the better!

The (U) symbol provides protection for many products sold in Aztlan and in the United States.

Where is Blabs! cutting and pasting her information from? Where is Aztlan?

Is Blabs! reading the websites of La Raza?

Yeah, right! The vegans also have their "Trojan horses". You don't think that someday the vegans will start whining that their food should be certified "organic" by a bunch of government bureaucrats? Think again!

The only thing Z________ Occupied here is you. Stop blaming other people for your shortcomings.

You dumb goyim pay a kosher tax on virtually every food product in the supermarket. Large corporations such as Coca Cola, Pepsi and Kraft pay MILLIONS to the kosher mafia to obtain this symbol ("hecksher") -- the funds go to support rabbis loitering in shuls and to lobby the US gov't to enact pro-Israel and pro-Jewish legislation. The corporations pass this cost onto you, the goy consumer.
If the state had any involvement whatever in enforcing archaic and ridiculous Christian dietary rules, the tribe would be protesting daily and their minions at the ACLU would be clogging the courts with litigation claiming violations of the First Amendment and any other issue their talmudic reasoning could support. Yet this goes on and on, and the few brave people who dare to question it are slandered as "anti-semites." (See what happened to the Commander G.L. Rockwell.) As Joe Sobran once pointed out: Anti-semite used to mean someone who doesn't like Jews. Now it's someone Jews don't like.

Babs, with all due respect, you're babbling.

1. Paying for Kosher certification is no different than making the product organic, vegan or anything else.

If it's certified organic, then you've now opened up your customer base to more people. Obviously, it will cost more to make it organic, but that's a business decision you make. Same with Kosher.

2. There are many major American products that are not Kosher and likely never will be. If your conspiracy boycott theory were true, then how come these companies are still in business? Jell-o, for example, was not kosher (in fact, only the puddings are kosher, not the rest of their products) until a number of years ago and they've been in business for how long? How did they stay in business while Hunt's was Kosher and they weren't?

So...anyone still wondering why Moby gave the North Flushing Senior Center over a half million dollars? Seems like something's going on. Just sayin'...

Why is there a division of Kosher Enforcement? Kosher is a religious preference is it not? Our tax dollars at work ladies and gents, and yet still no revolution.

We have become such lazy complacent morons, all of us. If this was any other European countries with all of their problems, the People would be out in front of the Government Offices responsible for this sham until it was rectified. But , in America we are thaught to be subdued, to debate, not take to the streets, watch our flatscreens and 150 channels, and let our elected officials get richer, oops sorry I meant get the problem resolved. (Big Brother is watching).

"You dumb goyim pay a kosher tax on virtually every food product in the supermarket. Large corporations such as Coca Cola, Pepsi and Kraft pay MILLIONS to the kosher mafia to obtain this symbol ("hecksher") -- the funds go to support rabbis loitering in shuls and to lobby the US gov't to enact pro-Israel and pro-Jewish legislation. "

"Paying for Kosher certification is no different than making the product organic, vegan or anything else."

Kosher authenticity is a RELIGIOUS certification, and only a matter of concern for a tiny percentage of the population. It is that group of people that should pay it's costs. And I mean both for the cost of the certification process, and it's enforcement.

It's not a matter of concern to the state government, and these resources should be directed elsewhere, as the Governor decided.

agreed and it should have been done years ago.